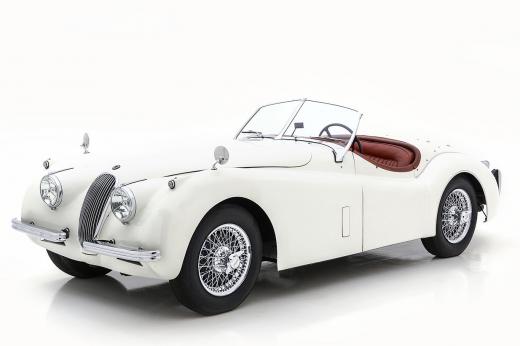 Price: USD $119,500
At the 1948 London Motor Show Jaguar unveiled their first postwar sports car to astonished onlookers. The spectacular new XK120 redefined the whole notion of sports cars in the post-war era combining race car performance in a stunningly beautiful and production-ready package. Initially the concept was intended merely as a testbed for Jaguars newest engine the 3.4-liter XK inline-six yet the positive reception quickly convinced William Lyons to put it into production. The technically-advanced engine featured a sturdy iron block topped with an alloy twin overhead camshaft cylinder head making 160 horsepower in standard form. With such exotic specifications it would have been understandable if Jaguar chose to build the car in limited numbers. However engineers adopted new techniques allowing them to mass-produce the exotic twin-cam engine which allowed the XK120 to be considerably cheaper than its performance rivals. Supporting the powertrain was a robust chassis with independent front suspension based loosely on the MkV saloon but substantially narrowed and tuned for handling. The real sensation was the gorgeous body penned in-house at Jaguar and quite unlike anything else on the road at the time. Devoid of fussy chrome trim and unnecessary frills the XK120 body was curvaceous and beautifully proportioned. The clean lines were uninterrupted particularly on cars with steel wheels and full spats on the rear fenders.More than just a pretty face the XK120 delivered extraordinary performance for the period. The RAC officially timed a mostly-standard XK120 (with a small aero screen and tall gear ratio) at 132.6 miles per hour on the Ostend-Jabbeke motorway in Belgium. Other speed records followed as did countless victories on race circuits and in rallies in Europe and the USA. The XK120 paved the way for the Le Mans-winning C-Type and set the foundation for Jaguars astounding string of motorsport victories Jaguar enjoyed throughout the 1950s. Today the Jaguar XK120 is a cornerstone collector car with passionate owners ranging from the grassroots to the seasoned world-class collector. Over seventy years since it was first shocked the world with its dramatic unveiling the XK120 continues to thrill with its timeless beauty and electrifying performance.This charming XK120 is a desirable Open Two-Seat roadster equipped with the optional Special Equipment package and comes to us fresh from long-term ownership. Presented with a fabulous careworn patina this XK120 has seen regular care and enjoyment over the past 50-plus years. It appears to have never been entirely apart instead getting restoration work only as needed. The history file shows that in the early 1960s the car belonged to David Gunn of Manchester Connecticut. In April 1968 he sold the car for a whopping $350 to Mr. P. Robins later of Burlington Vermont. For the next quarter-century in Mr. Robinss stewardship the Jaguar enjoyed regular care and maintenance. Service records in his name go back to 1968 and continue through 1994 when he sold the car to its most recent owner.At some point in the 1970s Mr. Robins had the XK120 repainted from its original gray to the white it wears today. In 1976 it got a new interior in the original red using correct leather carpet and vinyl materials sourced from Jaguar specialist Bill Bassett. In the hands of the most recent caretaker the Jaguar continued to enjoy consistent upkeep by marque specialists including Donovan Motorcar Service in Massachusetts and Motorcars Inc of Connecticut. The car presents today with an honest charm and patina that reflects its years of cherished enjoyment. The white paintwork is consistent and glossy with as some imperfections and evidence of repairs. The chrome trim is in good condition having aged well since its restoration in 1986. Chrome wire wheels are excellent wearing appropriate Dunlop Roadspeed tires and the car sits on the road with an even proud stance.With over 40 years of regular use the red interior presents with the appeal of a cherished pair of leather gloves. The leather seats show appropriate levels of creasing and fading yet they remain supple and in fine order. Cockpit rails door panels kick panels and the vinyl-trimmed dash are excellent. Instruments and switches appear in good condition and true to original specification with the only deviation being a discreet switch for the auxiliary cooling fan.The 3.4-liter twin-cam inline-six appears in tidy condition under the bonnet. The original numbers-matching cylinder head remains in place although the block is a period-correct replacement. The engine bay is orderly with the original grease gun on the firewall correct SU carburetors and alloy cam covers. The presentation is good enough condition to enjoy as is with room to improve the cosmetics if the next owner so desires. It is a good running and driving car that is ready to be enjoyed as-is with only minor fettling although some additional sorting and a set of tires may be needed before tackling longer-distance events.As one of the most iconic and beautiful British sports cars of all time the XK120 is a perennial favorite among car collectors and enthusiasts. The fantastic character of this OTS roadster is sure to appeal to the enthusiastic driver as this car is a superb choice for taking advantage of a multitude of historic driving events and road rallies around the world.Offers welcome and trades considered

Note from the publisher:
Welcome to our collector car marketplace where we feature thousands of classified ad listings of vintage cars for sale. We hope that you will bookmark our site and visit often; our cars are updated every day. Furthermore we encourage you to subscribe to our mailing list so that we may periodically notify you of interesting classic cars that become available.
Home > Classic Cars For Sale > Jaguar > XK120 > 1954 Jaguar XK120