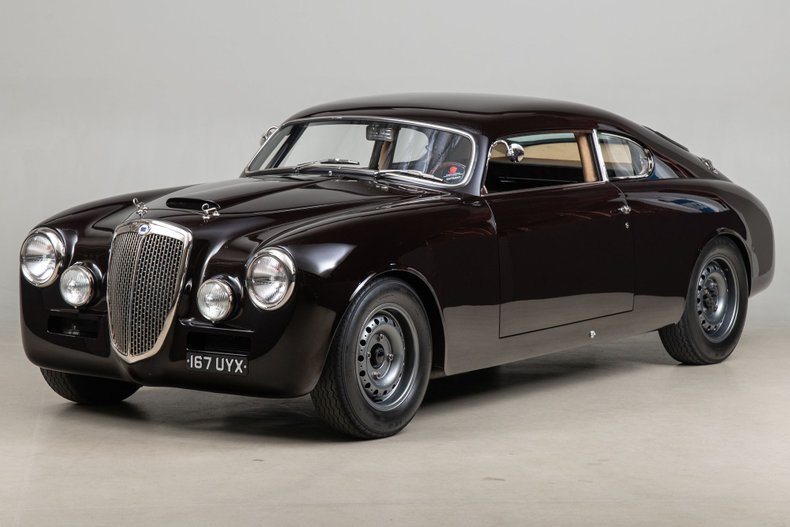 Price: Contact Seller for Price
View high resolution photos Only 9 total examples to be built 2nd Aurelia B20GT Outlaw produced by Thornley Kelham Owned by Danny Sullivan, racing champion and winner of the 1985 Indianapolis 500 Approximately 5,000 labor hours invested Based on the Bracco Aurelia race car for inspiration 3 chopped roof and bespoke bodywork Upgraded fuel-injected 2.8-liter Lancia V6 producing 180+ horsepower 4-speed manual transmission The ultimate Lancia Aurelia B20GT 2,763 miles = 4,447 kilometers The Lancia Aurelia B20 GT came from humble beginnings. The original Aurelias had production V6 engines, the first of their kind in an automobile, and it only took a matter of time before people started racing. With the first series of B20GT cars were built in early 1950, 2-door sports cars, they were considered some of the first Gran Turismo cars in the world. During the 1951 Mille Miglia, demand outstripped supply for these little sports cars after proving their worth during the races. With an adept chassis and significant power for the time, the cars were becoming popular and eventually evolved over time spanning the course of 6 different series of Aurelia B20GTs. Not often does the idea come about of turning an Aurelia B20GT into some sort of outlaw, a car that is restored and upgraded without the usual rules of engagement with concours shows. Thornely Kelham of Gloucestershire arent just your normal restoration facility, but have the skills and knowhow to create designs from anew. Having sourced and restored the Bracco Aurelia B20GT, a special racer that took 2nd overall in the Mille Miglia and a scored a class win at the 24 Hours of Le Mans in 1951, TK was acutely aware of the intricacies of the Aurelia platform, but also drawn towards it. One of the most notable features of the Bracco car was the hot rod-like chopped roof, no doubt in efforts to streamline the car in period. After the restoration and appearance at Pebble Beach in 2015, the idea was planted of a Fuorilegge (outlaw in Italian) which brings us to this special car. The 1st B20GT Outlaw project began with an American collector asking Thornley Kelham if they would build something like the Bracco car, but with modern upgrades paired with philosophy of an outlaw that has been popularized by the Porsche 356 community. With about a half a second of hesitation they said yes, they could do that. They found a disheveled 6th series Aurelia, stripped it down to the bare bones, and began to chop, widen, and create the outlaw. Over 5,000 hours were invested in that first car and the cars after it, it being the test bed and having a large amount of creative license to create what Thornley Kelham thought would be the best interpretation. All four fenders were widened, fatter tires fitted, Jaguar D-type style wheels added, bumpers and rain rails removed, the front turn signals hidden inside of the head lights, Nardi scoop cut into the hood. On the inside, an Alcantara headliner, Porsche Speedster seats, and an FIA-spec roll cage certainly gives the vibe of a street racer with class. Mechanically, the car was quite different than before. While the Lancia uses a Flaminia V6 engine, it was bored out to 2.8-liters with more powerful camshafts and a custom exhaust to produce about 175hp, giving a healthy boost of 57hp over a stock engine. The steering rack was upgraded to a rack and pinion setup, brakes upgraded to discs on all four corners (but inboard brakes on the rear), and the sliding pillar suspension has custom gas-filled shock absorbers to look factory but produce modern handling capabilities. When the time came to reveal the newly-created outlaw, Thornley Kelham were a little anxious as they were not sure how the car would be received. Fortunately for them, the B20GT outlaw was met with thunderously positive responses at the 2015 Salon Prive

Note from the publisher:
Welcome to our collector car marketplace where we feature thousands of classified ad listings of vintage cars for sale. We hope that you will bookmark our site and visit often; our cars are updated every day. Furthermore we encourage you to subscribe to our mailing list so that we may periodically notify you of interesting classic cars that become available.
Home > Classic Cars For Sale > Lancia > Aurelia > 1954 Lancia Aurelia