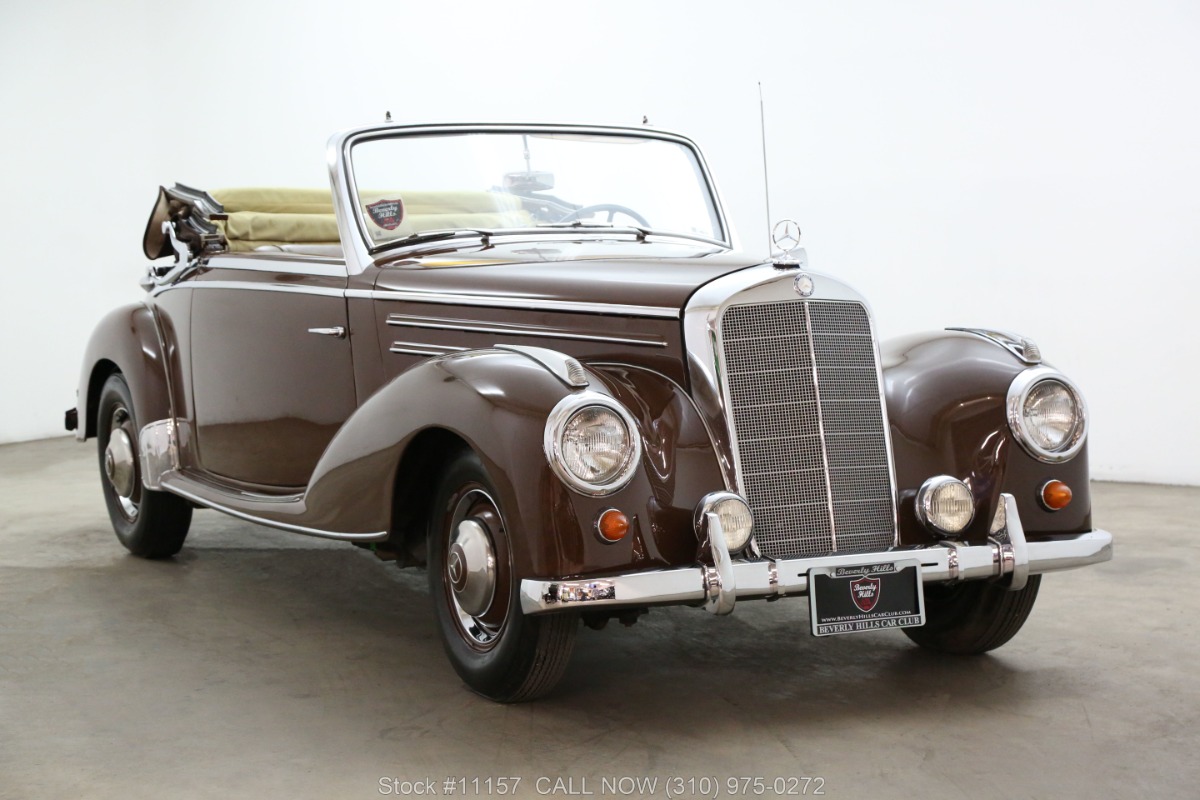 Price: USD $112,500
1954 Mercedes-Benz 220Cabriolet A This very elegant 1954 Mercedes-Benz 220 Cabriolet A is available in brown with a tan interior. It was bought by the previous owners father out of New Jersey in 1971. A five-year restoration was completed in 1977 (documentation included) totaling over $41,000. The car was brought to Europe the following year, where it attended many local shows and participated in the Bath to Bournemouth Classic Car Run. It was reportedly stored upon its return to the U.S. in 2011, and recommissioning in August 2018 included rebuilding the carburetor and installing a new battery, brake shoes, and fresh fluids. This example is said to be one of approximately 300 equipped with a curved windshield, and additional features include rear-hinged doors, integrated headlights, chrome body trim, and a brown convertible top.The interior features light brown leather upholstery, matching carpets, and pleated door panels. Rubber floor mats line the front footwells and transmission tunnel, and the rear seat can be folded and stored for additional cargo space.The 2.2-liter inline-six is paired with a four-speed manual gearbox and produced 85 horsepower when new. The vehicle was serviced in August 2018 after approximately seven years in storage, and work included rebuilding the carburetor, adding fresh fluids, and installing a new battery. Records include a 1971 bill of sale, as well as receipts from the restoration, which began in 1972 and was completed in 1977 at a total cost of $41,237.34. A binder of documentation and photographs from the work is included in the sale. Certainly, a stunning example that is not to be missed. This Mercedes is mechanically sound. For $112,500

Note from the publisher:
Welcome to our collector car marketplace where we feature thousands of classified ad listings of vintage cars for sale. We hope that you will bookmark our site and visit often; our cars are updated every day. Furthermore we encourage you to subscribe to our mailing list so that we may periodically notify you of interesting classic cars that become available.
Home > Classic Cars For Sale > Mercedes-Benz > 220 > 1954 Mercedes-Benz 220