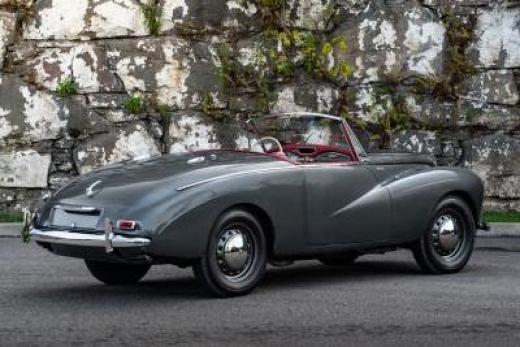 Originally derived from the Sunbeam-Talbot 90 sedan, the first open two-seater Sunbeam roadsters were conceived by a British dealer as rally special. Officially unveiled in 1953, the Sunbeam-Talbot Mk.1 Alpine Roadster was named as an homage to the companys success in winter Alpine Rallies of the early 1950s. The rear-wheel-drive, hand-built Alpine Roadsters saw immediate success on the rally circuit and were piloted to multiple wins and noteworthy finishes by drivers as famed as Stirling Moss and John Fitch. The Alpine Roadsters featured a proprietary 2.2-liter OHV in-line four-cylinder engine with increased compression mated to a four-speed manual gearbox allowing the roadsters to reach speeds in excess of 100 mph. These special cars were hand-built by Thrupp and Maberly, coachbuilders by appointment to Queen Victoria and only 1582 were produced with around 1000 of these examples being sent to North America. Only a small portion of the total production is known to exist with estimates putting the total number of remaining Sunbeam-Talbot Mk.1 Alpine Roadsters at around 200 examples.

The example on offer here, chassis number A3012894 and engine number A3012894LRX, is a 1954 Sunbeam-Talbot Roadster finished in Gunmetal with a red interior. This roadster features a rare center shift option which was an option that was fitted to some cars at the time of production conversion but we cannot confirm that this car was originally delivered in this manner. The odometer currently reads 9235 although the true mileage of the vehicle is not currently known and this is more likely to be 109,235. This car was purchased by the current owner in 2004 out of Maryland where it had been sitting for approximately 45 years covered in dust in the back of the previous owners garage. At the time of purchase, the car was still in solid condition so the car was treated to a light sympathetic restoration which included new paint, chrome, a new interior, as well as a new top, all completed by the previous owner over the past 10 years. The mechanicals on the car were gone through in order to get the car running and driving but nothing was rebuilt unless needed. Since completion of the restoration, the car has seen minimal miles and has been stored properly. As it sits now, the car is in good condition both cosmetically and mechanically. This Sunbeam-Talbot Roadster would make the perfect vehicle to compete in vintage rallying or touring as well as general sunny day driving.

This 1954 Talbot was listed for sale on 10-23-19 09:42:47. The vehicle color is Grey and VIN is not available . Kindly check ad for seller's location. Seller`s stock ID is 19SG1050338712. There are 4 other Talbot cars currently listed for sale on our website. You may desire to see what other Talbot cars are selling for by visiting our Sales Data page.

Note from the publisher:
Welcome to our collector car marketplace where we feature thousands of classified ad listings of vintage cars for sale. We hope that you will bookmark our site and visit often; our cars are updated every day. Furthermore we encourage you to subscribe to our mailing list so that we may periodically notify you of interesting classic cars that become available.
Home > Classic Cars For Sale > Talbot > > 1954 Talbot