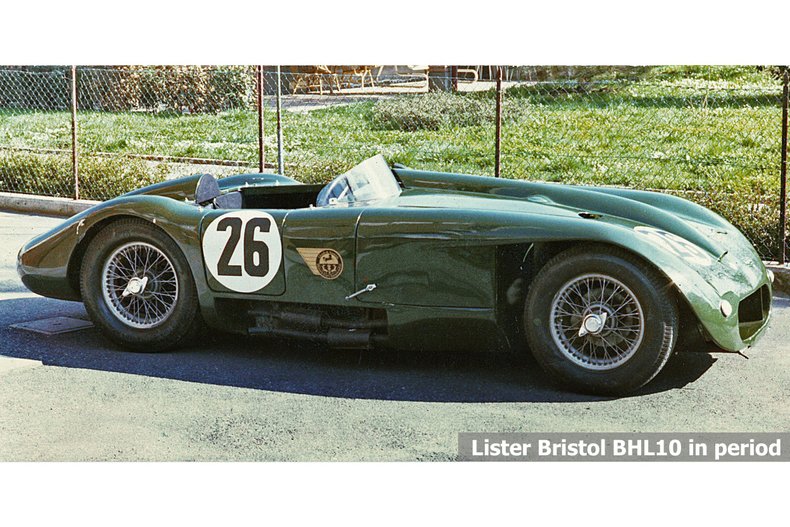 Price: Contact Seller for Price
1955 Lister-Bristol VIN: BHL 10 View high resolution photos One of 11 Lister-Bristols ever built Verified by specialist Chris Keith-Lucas of CLK Developments Ltd. Unique Wakefield aluminum body Rare example compared to more common Lister-Jaguars Large collection of period-correct parts for project Part of the early production race cars built by Lister Few post-war race cars are as widely recognized as the graceful bodywork of late 50s Listers. Known for their powerful engines, elegant body shapes, and for their ability to win, the wide range of Lister cars left an impact on the motorsport community and helped define the design of cars in the 1950s. Like all race car builders, they didnt appear overnight and the story surrounding early Listers is a fascinating story and a testament to their designers ingenuity, Brian Lister. Enthusiastic about racing, Brian experienced a number of race cars during competition but was always left with an unsatisfied feeling. This sparked his journey to establish Brian Lister Cambridge Ltd., shortly after negotiating a small loan of 1,500 pounds from his father. The only stipulation was that if nothing of merit was created within 6 months that Brian abandon the project. Undeterred, Brian designed and fabricated components for the first Lister and after a few months of building, the first car was revealed. The Lister-MG (using an MG powerplant) was Brians first Lister race car. Not able to afford the more powerful Bristol engine at first, the first Lister was propelled by an MG 1,466cc engine, proving to be unpowered and thus making the car uncompetitive. After a few races, it was obvious that the Lister-MG would not be able to win any events without a better powerplant. After much deliberation (and some major money pulled together), Brian was able to purchase the Bristol engine that he had wanted from the start. With the installation of the Bristol engine, Brian designed and oversaw the building of the chassis, Don Moore tuned the engines, and Archie Scott Brown driving. This welcome addition completely changed the status of the Lister from uncompetitive small-time racecar to becoming almost unbeatable. It began racing in the mid-1954 season and making quite an entrance during the televised British GP Silverstone meet of July 17th. Not only did the Lister-Bristol win 1st-in-class for the 2.0-liter class, but finished 5th overall in the unlimited category, with only bigger C-type Jaguars and Aston Martins finishing ahead of them. The 1954 season saw the Lister-Bristol finding success at a number of racetracks, including Snetterton, Brands Hatch, Castle Combe, Silverstone, Crystal Palace and Goodwood. Between the capable Archie Scott Brown and the equally-effective Lister, the race car was quickly becoming known as an extremely potent machine. 1955 was the year of the Lister-Bristol for Brian and his team. The early success of the car in the latter half of 1954 was no fluke, as the racecar and Scott Brown took no less than 13 checkered flags during the 55 season. They even won the British Empire Trophy at Oulton Park, besting an Aston Martin DB3S, HWM-Jaguar, and D-type opposition. 1955 was also the first year of customer production Lister-Bristol cars being built, providing a small-but-appreciated profit that allowed Brian and his team to continue racing. These additional cars on the track more importantly established Lister as a marque rather than a builder of one-off specials. The Lister-Bristol would stop being built after 1955 as development continued to better the Lister cars. However, Bristols were still raced by many of Brians customers and were competent and valid contenders in races for years to come. This 1955 Lister-Bristol, BHL10, is one of the eleven Lister-Bristols ever built. In 2011 the Lister was verified by race car specialist Chris Keith-Lu

Note from the publisher:
Welcome to our collector car marketplace where we feature thousands of classified ad listings of vintage cars for sale. We hope that you will bookmark our site and visit often; our cars are updated every day. Furthermore we encourage you to subscribe to our mailing list so that we may periodically notify you of interesting classic cars that become available.
Home > Classic Cars For Sale > Lister > Bristol > 1955 Lister Bristol