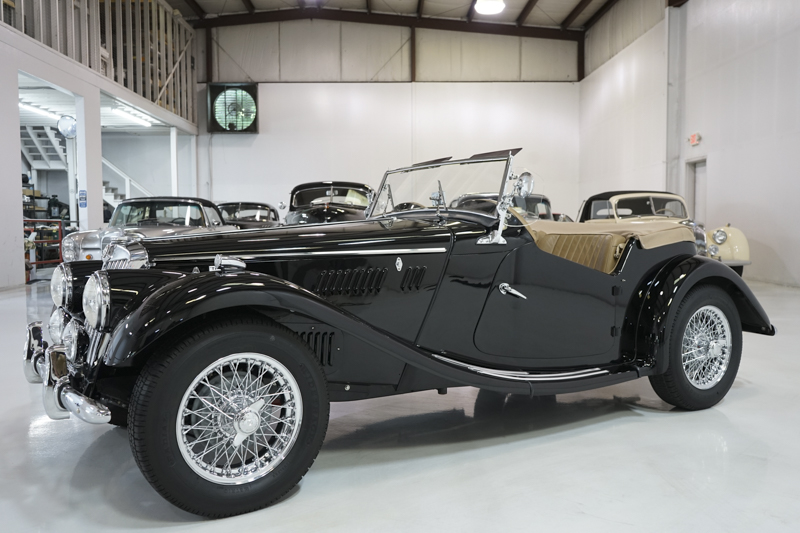 The stunning 1955 MG TF 1500 Roadster featured here is finished in black over a biscuit leather interior with complimenting beige folding convertible top. This particular TF 1500 has been meticulously restored and has been fitted with an upgraded 5-speed manual transmission for drivability while the numbers matching XPEG 1.5-litre engine is still in place and performs wonderfully today. An incredible assortment of accessories adorn this classic MG including chrome wire wheels, dual tinted sun visors, Moto-Lita inspired wood rimmed steering wheel, front badge bar holding both a Lucas fog and Lucas driving light and more. The TF also comes with a full tonneau cover, new convertible top boot, and removable side curtains for all-weather driving should the need arise. We are especially proud to offer this stunning 1955 MG TF 1500 Roadster to the most astute collector, investor or enthusiast who appreciates the legacy and appeal of the classic T-series MG.Classic carshave proven to be among the most resilient and rewarding investments in recent years with the Historic Automobile Group Index (HAGI) jumping 39% in 2013, 16% in 2014 and 17% in 2015 while posting gains of 467% over the last 10 years. Ready to make aninvestment that you can actually enjoy?Please contactone of our expert sales consultants for more information. They will be happy to give you a complete walk-around, supply you with a more detailed description and answer any questions you may have. Buy with confidence. The last MG to really show the marques heritage, the TF was launched in October 1953. Designed in response to the decrease in sales of the TD, the TF served as the last of the T-series Midget cars before the MGA was launched in the fall of 1955. The TF featured the same frame and drivetrain as the TD, however a slight face-lift was applied to the design. The front fenders were reshaped to incorporate the headlights, taking away the T-series, pre-war appearance. MG also shortened and raked the front grill, which allowed the hood to sit lower and improve aerodynamics. On the inside, individual bucket seats were now standard which helped to give the driver and passenger a sportier feel. The proven XPAG engine was given the Mark II TD treatment with larger carburetors, an increased compression ratio and larger valves, which increased power output to 58hp. Beginning in 1954 a performance version of the TF was introduced, called the TF 1500. The new model shared the same timeless style as the original TF, while having been fitted with an enlarged 1.5 litre engine rated at 63hp. The TF 1500 is widely considered to be one of the most collectable of the T-series MG cars and only 3,400 were produced before the TF ended production in 1955.

Note from the publisher:
Welcome to our collector car marketplace where we feature thousands of classified ad listings of vintage cars for sale. We hope that you will bookmark our site and visit often; our cars are updated every day. Furthermore we encourage you to subscribe to our mailing list so that we may periodically notify you of interesting classic cars that become available.
Home > Classic Cars For Sale > MG > TF 1500 > 1955 MG TF 1500