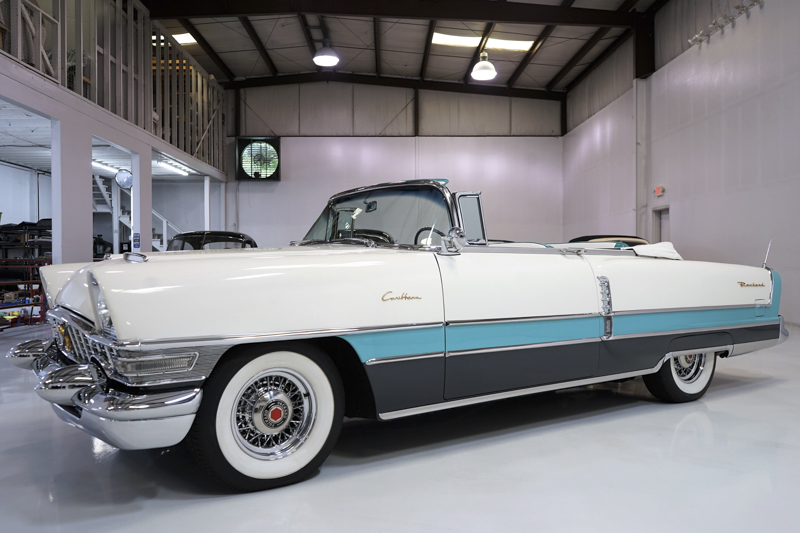 Mileage: 64
The magnificent 1955PackardCaribbean Convertible featured here is finished in the stunning color combination of Jade White over Gray Pearl separated by a Turquoise belt line with a matching Turquoise and white interior with white power folding convertible top. This particular example was the 220th out of only 500 produced for 1955. The Caribbean was purchased new in Nebraska by a local physician as a birthday present for his wife and was later displayed in the showroom by the selling dealer for 25 years! In the early 2000s the Packard was under the care of another meticulous owner who oversaw an extensive 18-month restoration by the specialists at SELCO Restorations in Richmond, Texas. The restoration addressed all components and aspects of the vehicle including the mechanical and electrical systems while completely renewing the Packards cosmetics. In all over 1,500 man hours were invested bringing the Caribbean back to like new condition. Since restoration the Packard has remained exclusively in collector-level ownership including discerning collector Richard Kughn, former President of the Lionel Trains! Today the Packard presents in spectacular condition while having only accrued 64,891 miles from new while the numbers matching 352ci Dual Quad V8 engine still performs like it was new! We are proud to offer this stunning 1955 Packard Caribbean Convertible to the most astute collector or investor who understands and appreciates the rarity of this greatAmerican marque.Classic carshave proven to be among the most resilient and rewarding investments in recent years with the Historic Automobile Group Index (HAGI) jumping 39% in 2013, 16% in 2014 and 17% in 2015 while posting gains of 467% over the last 10 years. Ready to make an investment you can actually enjoy? Pleasecontactone of our expert sales consultants for more information. They will be happy to give you a complete walk-around, supply you with a more detailed description, and answer any questions you may have. Buy with confidence. In 1955 Packard took its flagship model, the Caribbean, to new heights. A completely new design by Richard Teague succeeded in making the car look modern. Packards first series of V8 engines were now standard on all models, with the most powerful being the 352ci V8 equipped with dual-quad Rochester carburetors. This combination produced 275 horsepower and was only offered in the Caribbean. Underneath the new modern body was Packards unique torsion bar suspension which was a standard feature and made the model one of the best riding cars of 1955. Costing $5,932 when new, the equivalent of roughly $57,000 today, the Caribbean Convertible (style number 5588) was Packards most expensive offering for 1955. The combination of style, performance, ride quality and low production numbers (only 500 examples were produced for 1955) makes examples highly sought after by collectors today.

This 1955 Packard Caribbean was listed for sale on 8-2-20 11:27:47. The vehicle color is White Jade, Turquoise, & Gray Pearl and VIN is not available . Kindly check ad for seller's location. Seller`s stock ID is danie407401C_Caribbean. There are other Packard cars currently listed for sale on our website. You may desire to see what other Packard cars are selling for by visiting our Sales Data page.

Note from the publisher:
Welcome to our collector car marketplace where we feature thousands of classified ad listings of vintage cars for sale. We hope that you will bookmark our site and visit often; our cars are updated every day. Furthermore we encourage you to subscribe to our mailing list so that we may periodically notify you of interesting classic cars that become available.
Home > Classic Cars For Sale > Packard > Caribbean > 1955 Packard Caribbean