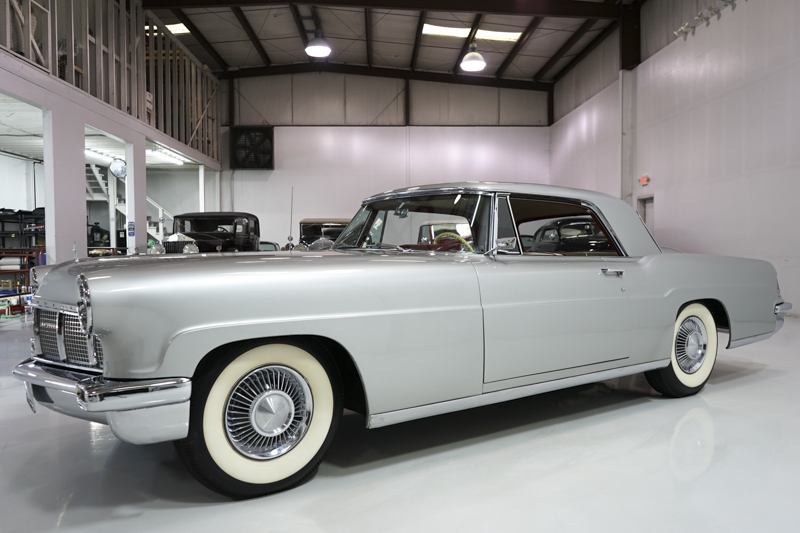 The Continental Mark II debuted at the 1955 Paris Motor Show. Its fashion forward lines fitted in nicely with the European marques also on display. First available for 1956 this incredible motorcar was the product of mostly hand built construction utilizing only the finest materials available. The interior of these exclusive vehicles were lavish with power features, full leather and instrumentation that rivaled the precision of the finest watchmakers. Power was derived from the 368 cubic inch V8 that produced an incredible 285 horsepower. This level of performance and luxury was not without cost, considering the cost of nearly $10,000 when new. The Mark II attracted the same clientele of Rolls-Royce with numerous famous owners including Elvis Presley, Frank Sinatra, Nelson Rockefeller, and U.S. President Dwight Eisenhower. Only 3,005 would be built between 1956 and 1957 and today the Continental Mark II remains to be one of the most sought after models by collectors across the globe.

The incredible 1956 Continental Mark II featured here is finished in the stunning factory, special order, color combination of Silver Gray Iridescent over a white and bright red leather interior. This particular example was completed at the Allen Park, Michigan assembly in March 1956 and was special ordered for Josephine Dody Ford; daughter of Edsel Ford, the only granddaughter of Henry Ford and sister to Henry Ford II. A copy of the original Continental Division order lists the car as constructed for Mrs. Walter B. Ford and mentions several special features including a special interior treatment with contrasting white and bright Red leather. Several other notable features include the lack of rear quarter vents; a standard feature of factory A/C Mark IIs, but one that Josephine did not care for. This is perhaps the only Continental Mark II to have been constructed with factory air condition, but without the rear quarter vents. A meticulously maintained example since new, today the Continental presents wonderfully while a mere 61,112 miles are present on the odometer. In 2014 this Mark IIs unique provenance helped gain its entry into the prestigious Amelia Island Concours dElegance! With a notable concours appearance and incredible, documented ownership provenance, this Continental Mark II is one of the best examples of this limited model to be found on the market today and will certainly bring many years of enjoyment to its next caretaker.

Note from the publisher:
Welcome to our collector car marketplace where we feature thousands of classified ad listings of vintage cars for sale. We hope that you will bookmark our site and visit often; our cars are updated every day. Furthermore we encourage you to subscribe to our mailing list so that we may periodically notify you of interesting classic cars that become available.
Home > Classic Cars For Sale > Continental > Mark II > 1956 Continental Mark II