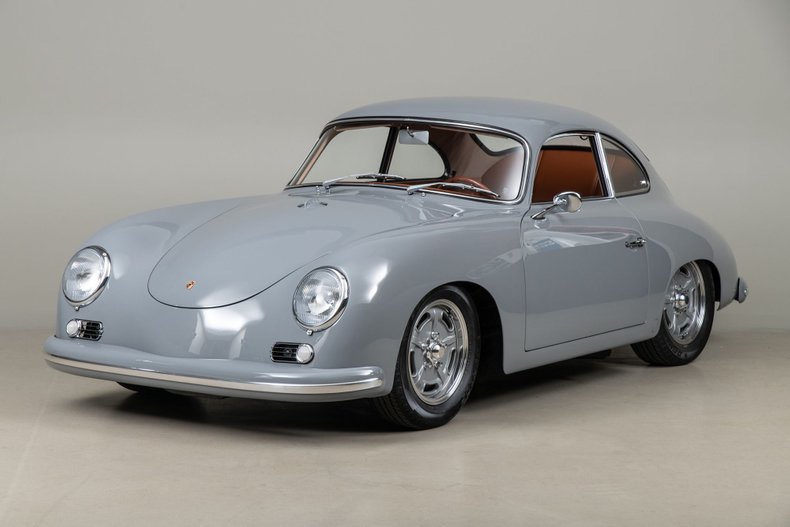 1957 Porsche 356A Outlaw VIN: 58179 An early 356 outlaw as cool as it gets! High performance 1800cc engine build, disc brakes, upgraded suspension Custom leather interior and 5-year project owned by Sid Chavers 34+ years of California ownership The building of an outlaw often reveals much about the owners personality. Some cars are built to be loud and flamboyant, others are built as sleepers to remain under the radar. Regardless of the outcome, the details on each car speak to the preferences and priorities of the owner. This early A 356 is no different, except that it has had influences from two different owners, both with supreme taste in both design and style. Most recently owned by automotive interior legend Sid Chavers, this outlaw 356A is appointed well in all the right places: restored, upgraded, and elevated beyond compare. This 356s story starts with Wyn Robertson, owner of Porsche repair shop Continental Auto for 40 years in Sacramento, California. Wanting to build a custom hot rod that would remain under the radar, Wyn sourced an early 356A through his Porsche connections. He set to work on making the ideal 356 outlaw for him, stripping the entire car of its mechanical parts to refinish, rebuild, and upgrade where he deemed fit. The 356 was ready to be upgraded to create a under-the-radar sleeper. Stock 356A engines are not known for their overwhelming amount of power, which Wyn made sure to address. The stock engine was upgraded with 1,800cc pistons and cylinders during a complete engine rebuild with the addition of a Norris camshaft. Solex carburetors were modified for the upgraded engine to ensure enough fuel could support the extra power. A new fuel tank was installed and the entire fuel system was upgraded with a fuel pump and pressure regulator, and full flow oil system with remote System One oil filter was added. All of the 356s gauges were restored by Palo Alto Speedometer who also custom sized an oil pressure and clock gauge for the Porsche, with the finishing touch of an 8,000rpm tachometer. To handle the sizable boost in power, the mechanical underpinnings were examined and upgraded. All new Porsche OEM disc brake rotors, brake lines, rebuilt brake calipers, and a dual master cylinder were added. Reinforced boxed arm front suspension with new king and link pins were installed, along with new Koni shocks and new wheel bearings. All new transaxle bearings, synchronization rings and rear axle bearings were replaced in a late-model 741 4-speed manual transmission with the later-model linkage for better shifting feel. Now with the suspension system on par with the upgraded powerplant, driving through backroads was now an exciting time. Once the car was completed, Wyn kept the car for a period of time before deciding to end his 30+ year ownership by selling the car to legendary automotive interior trimmer, Sid Chavers. A master craftsman at his trade, he decided to take the mechanically-sound 356 and add his own taste and influence into the car, this time in the cosmetics and interior. Bodywork and paint were taken care of by Darryl Hollenbeck of Vintage Color Studio. Hollenbeck stripped the 356 down to its original sheet metal, showing no rust. Subtle body modifications were carried out that add to this outlaws overall presence. A custom fuel filler in the center of the hood was added, the front and rear bumpers were narrowed and fitted closer to the body, and the entire car was sanded to have laser-straight body lines. Painted in the fantastic Nardo Gray color, all that was left was up to Chavers: the interior. Known throughout the automotive community for his unbelievable and award-winning custom interiors, Chavers wanted to make sure this 356s interior was a one-of-one and would blow anyone away. A semi-aniline leather interior was decided, with hints of Alcantara here and there. Amber brown leather was chosen and draped over Speedster seats with perforated insert

Note from the publisher:
Welcome to our collector car marketplace where we feature thousands of classified ad listings of vintage cars for sale. We hope that you will bookmark our site and visit often; our cars are updated every day. Furthermore we encourage you to subscribe to our mailing list so that we may periodically notify you of interesting classic cars that become available.
Home > Classic Cars For Sale > Porsche > 356 A > 1957 Porsche 356 A