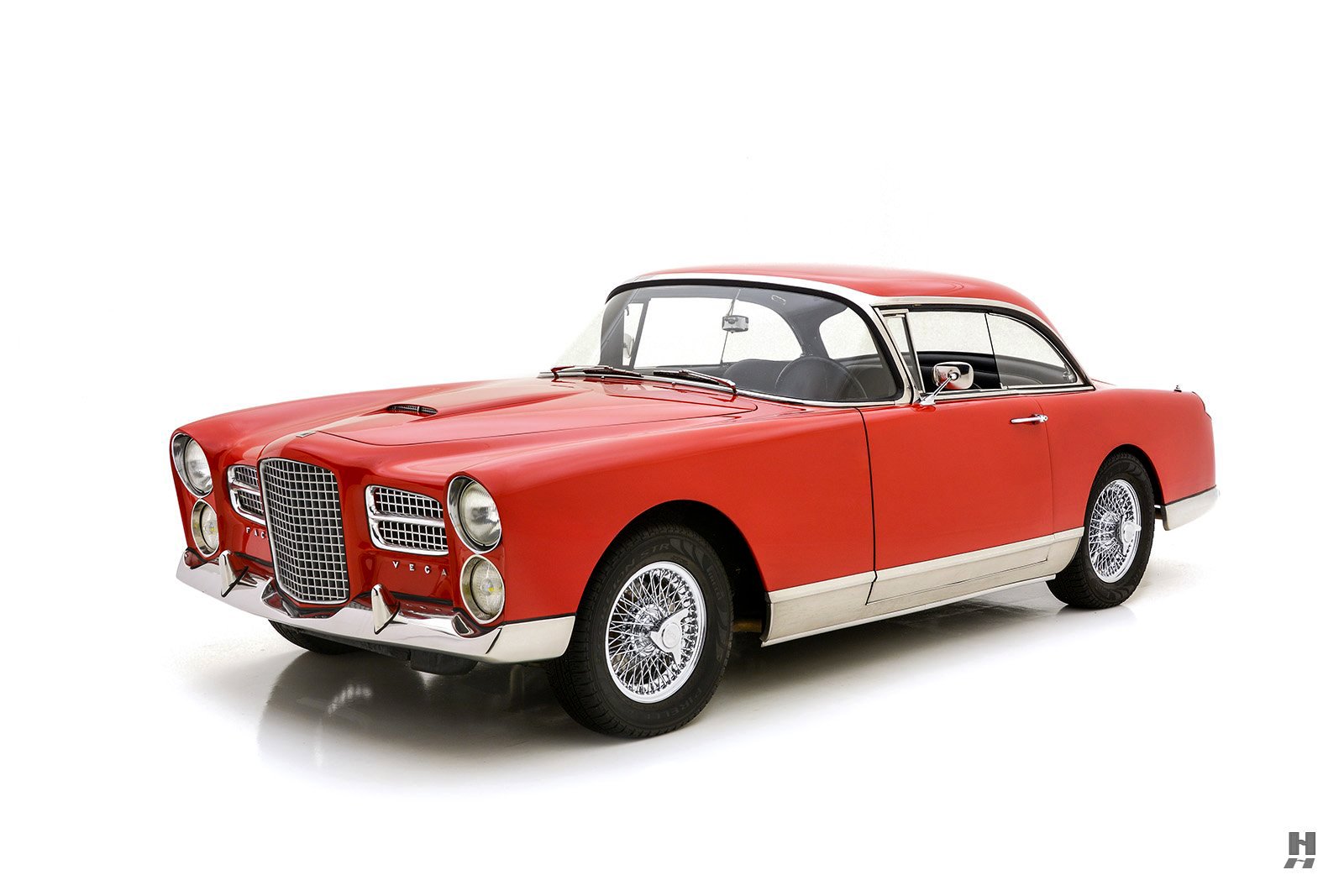 Price: USD $179,500
Jean Daninos is of the more intriguing characters in automotive history. A powerful industrialist of the post-WWII era he is celebrated for his business acumen as much as his playboy lifestyle. He founded his business FACEL (Forges et Ateliers de Construction dEure-et-Loir) in 1938 which he grew into a leader in the forging stamping and welding of alloys and stainless steel. The company was a significant contributor to the French aviation industry which earned him numerous official accolades after the war. Before founding Facel Daninos began his career in the automobile business training at the right hand of Andre Citroen where he helped design the revolutionary Citroen Traction Avant an experience that would serve him well in the future.In the 1940s and 1950s Facel diversified into consumer products such as stainless steel furniture while remaining active in aviation. Jean Daninos had a penchant for stylish luxury automobiles a passion which led him to add a coachbuilding division to Facels increasingly varied operations. Through his connections in the automotive world he secured contracts to produce car bodies for Panhard and Simca and from 1951 through 1954; he provided the coachwork for the very pretty Ford Comte. Later Facel partnered with Pininfarina to construct a series of ten bodies for the Bentley Mk VI paving the way for an expansion into the luxury car market.In 1954 Daninos expanded the coachbuilding operation into a full-fledged automobile manufacturer. With the Facel Vega FV FVS and HK500 Daninos created a distinctly French GT car with lavish trimmings and sophisticated style powered by increasingly potent Chrysler V8 engines. With Delahaye and Delage out of business and Talbot-Lago on the brink it left the Facel Vega as Frances only prestige car further enhancing the exclusive image. The list of prominent Facel-Vega owners is impressive including Pablo Picasso Christian Dior Frank Sinatra Tony Curtiss and Ringo Starr. Even racing drivers like Maurice Trintignant and Stirling Moss owned Facels the latter preferring to drive his Facel between continental racing events.We are pleased to offer this 1958 Facel Vega HK500 chassis number HK-A6. This early-production example is just the sixth HK500 produced and it has a fascinating history from new. Among the marques many enthusiasts one iconic photograph captures the elegance sophistication and glamour of the Facel Vega. The image of Ava Gardner casually walking away from this particular HK500 with actor Tony Franciosa in hot pursuit of her has long been associated with Facel. For many years it was assumed that the car in that photograph was hers - chassis HK-Z1. More recently a group of marque enthusiasts soon discovered that the Facel from that iconic photo is this HK-A6 a much earlier example than Gardners.The production records compiled by marque expert Hans Ruhe show A6 left the works with a TT registration used in France for temporary tourist/export cars. Rather than going through a distributor the factory delivered A6 directly to the Hotel Excelsior in Rome Italy where then 30-year-old actor Anthony Franciosa was on set with Ms. Gardner filmingThe Naked Maja(1958). Comparing photos from the same series against production records experts determined the car was indeed Franciosas. It was delivered in dove gray over a black interior and equipped with Rudge knock-off wire wheels with options including an automatic transmission power steering and a Radiomobile radio.The HK500 found its way to the USA first in California presumably with Franciosa then later in Oregon where it spent much of its life. It survived the years as a remarkably well-kept and original car with some restoration work done as needed. Hyman Ltd acquired HK A6 in 2011 noting that it retained its original Chrysler 383 c.i. Wedge V8 engine and original black leather interior. Following its sale to a European collector HK-A6 received a thorough four-year restoration in France by marque specialists Atelier Tisserand Restauration. The owner chose a striking shade of red for the body and restored the opulent leather interior in its original shade of black with burl woodgrain-finish accents.Following its restoration in 2014 the owner used the car around Europe for several years and in 2018 it joined a private collection in the United States. It is in excellent condition with attractive glossy paintwork and high finish quality. Given Facels other business interests it comes as no surprise that much of the brightwork is stainless steel rather than chrome. On this car it is in very good order showing some minor polish marks consistent with care and the age of the restoration. It rides on double-laced chrome wire wheels with Facel knock-offs and black wall Pirelli radials.As with any Facel Vega the interior is lavishly appointed this example featuring gorgeous black leather wool carpets and intricate woodgrain finishing. The upholstery remains taut and lovely details abound including the factory deep-dish steering wheel quilted headlining period-look modern radio electric windows and correct Jaeger instruments. It is indeed a wonderful place to spend an afternoon of effortless motoring.The engine bay is highly detailed with high-quality finishing found throughout. The Chrysler Wedge V8 is the original numbers-matching unit per the available production records and is backed by a Torqueflite automatic transmission as equipped when new. Discreet yet useful updates include an updated electric power steering system and a disc brake conversion specifically engineered for Facel cars by Facel specialist Hans Ruhe in the Netherlands. While in Europe HK A6 participated in numerous classic car events including the prestigious Zoute Grand Prix in Belgium and it remains fabulously well-sorted for enjoyment in a host of motoring events around the world.Offers welcome and trades consideredFor additional details please view this listing directly on our website https://hymanltd.com/vehicles/6684-1958-facel-vega-hk500-coupe/

Note from the publisher:
Welcome to our collector car marketplace where we feature thousands of classified ad listings of vintage cars for sale. We hope that you will bookmark our site and visit often; our cars are updated every day. Furthermore we encourage you to subscribe to our mailing list so that we may periodically notify you of interesting classic cars that become available.
Home > Classic Cars For Sale > Facel-Vega > HK500 > 1958 Facel-Vega HK500