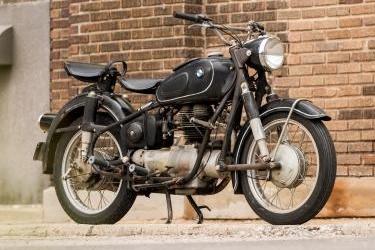 BMW and Germany were in ruins following the Potsdam Agreement and the end of WWII in the European theatre. With their hands tied, they were very limited on what they could design and build so they were largely relegated to pre-war designs for the postwar motorcycles. When the agreement was lifted in 1948, BMW's first postwar motorcycle to be sold to the public was the R24 250cc single cylinder, which was essentially a pre-war R23. It was not until 1956 that BMW would introduce their largely redesigned R26 model. Fitted with a 250cc single-cylinder engine, producing 15 hp, bolted directly to the frame, the R26 also came with an enclosed drive shaft, rear swingarm and Earles type front forks. The little single cylinder bikes sold well, especially in Europe, where economic and reliable daily transport was much more important than here in America. The R26 would be replaced by slightly upgraded R27 in 1960. Over its 5-year production run, just over 30,000 R26 motorcycles were built, with most of them finding homes throughout Europe.

This particular 1959 BMW R26, chassis number 362283 and engine number 362283, is a numbers matching example with excellent originality and patina throughout. It is believed to be original paint and judging by the patina and character present on the bike, it is hard to argue otherwise. Not much is known on the early history of the motorcycle but for past approximately 2 decades it has resided in collections and has been well cared for and maintained in a running project type condition. According to the registration sticker, still affixed to the rear fender it was last registered in Pennsylvania in 1985. The bike currently runs and has a fresh battery installed although we were only able to get the bike running by bump starting it. The odometer currently states the mileage as 4297 but the accuracy of this cannot be confirmed. With a bit of additional service, this R26 could easily be made roadworthy and would be the highlight of any motorcycle gathering or an excellent conversation piece in any collection. Included with the sale of this motorcycle is the original owners manual.

Note from the publisher:
Welcome to our collector car marketplace where we feature thousands of classified ad listings of vintage cars for sale. We hope that you will bookmark our site and visit often; our cars are updated every day. Furthermore we encourage you to subscribe to our mailing list so that we may periodically notify you of interesting classic cars that become available.
Home > Classic Cars For Sale > BMW > > 1959 BMW