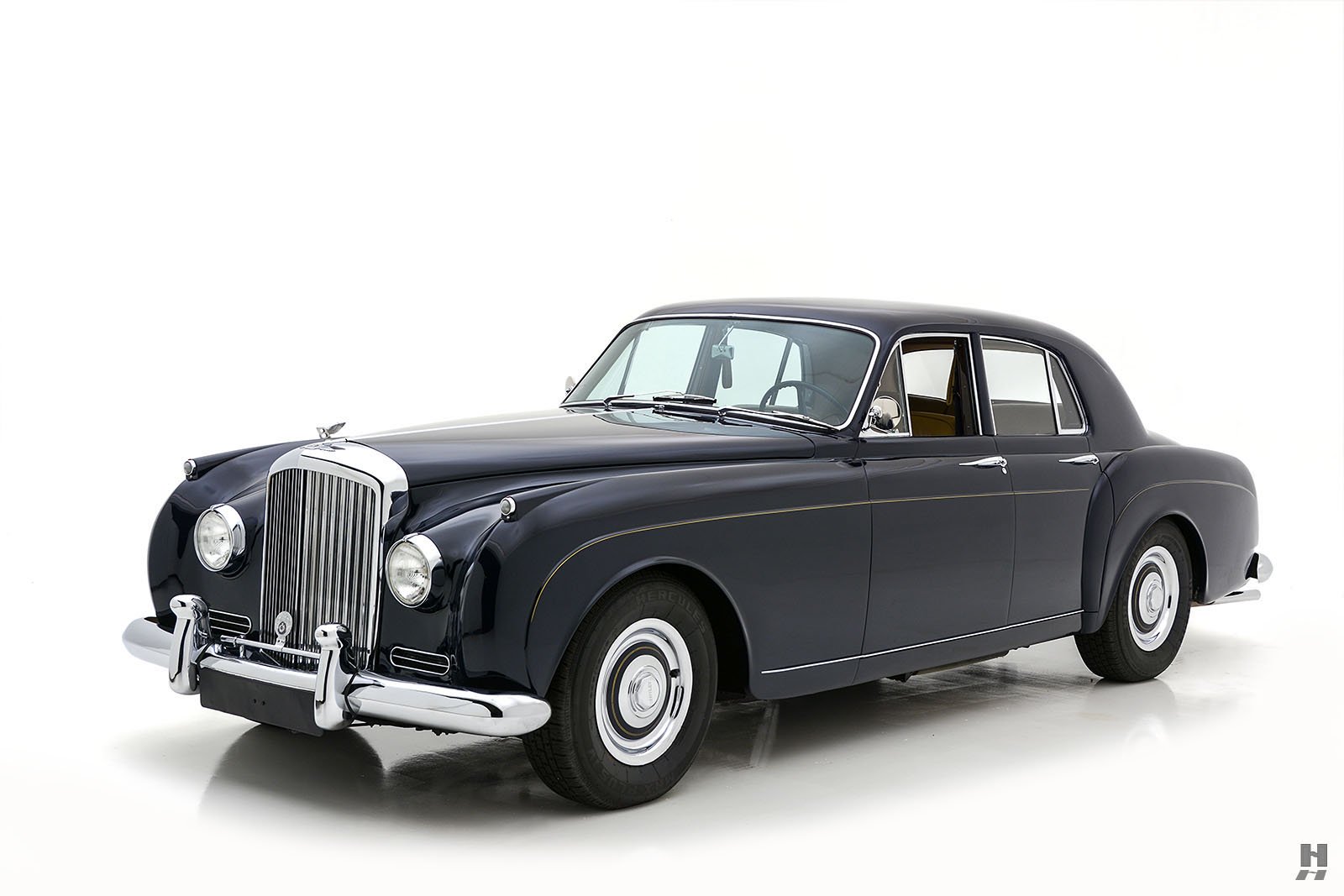 Price: USD $269,500
In the spring of 1955 Rolls-Royce and Bentley announced the arrival of a new range of two virtually identical models respectively known as the Silver Cloud and S-Series (also referred to as S-Type or later S1). The new models culminated the efforts to standardize the line that began with the Silver Dawn and R-Type. Standard Steel Saloon was now firmly entrenched in regular Rolls-Royce parlance with the factory and clients now used to the idea of full factory-built cars. In terms of styling and mechanical makeup the standard saloons of Bentley and Rolls-Royce were virtually identical with only subtle detail differences between the two. Power came from a 4.9-liter inline-six derived from the high-performance R-Type Continental. Given the success of that car management decided that a hotter version of the new chassis should join the new range and development began in earnest.Given Bentleys sporting history the new high-performance variant would be a Bentley-only offering bearing the famous Continental name. Plans called for the Continental to be sold ex-works as a chassis only with three official catalog body styles available. Standard bodies included a two-door saloon by H.J. Mulliner and a Park Ward two-door saloon with corresponding drophead coupe. In 1957 one of the most important developments of the Continental series arrived with the introduction of a four-door sports saloon courtesy of the drawing boards of H.J. Mulliner. Officially known as Design 7443 its more evocativeFlying Spurmoniker drew from the family crest of Mulliners Managing Director Harry Johnstone.Initially Johnstone was met with resistance from Crewe to approve the design as they considered the Continental chassis to be the reserve of sporting two-door coupes and dropheads. But Mulliner saw potential in a taut and sporty saloon and buyers agreed snapping up 54 standard cars on the S1 platform and many more on later series. Subtle variants of the Flying Spur were also available including Style 7443/B known as the four-light Spur. The four-light models blind quarters transformed its character with a more aggressive and purposeful appearance. There were no mechanical changes yet enthusiasts recognize the four-light sports saloon as one of the most desirable and significant designs in Bentleys post-war history with just fourteen of these special S1 Continental Flying Spurs produced in total.Offered here is chassis number BC41LFM one of only three left-hand drive four-light S1 Continental Flying Spurs constructed. According to records provided by the Rolls-Royce Foundation this car left England aboard the S.S. Andria arriving in the United States in March 1959 in time for display at the New York Auto Show. After the show the famous dealer J.S. Inskip delivered the car to its first owner Mr. Vincent Shea of Manhattan a regular Rolls-Royce and Bentley customer. The hand-written build sheet describes the unique specification including a radio with power aerial under-bonnet horns power-assisted steering Dunlop white-wall tyres and even such minutia as coachwork instructions a tin of polish and the cheeky anti-hobo door locks in what is perhaps a playful jab at the cars intended home of New York City. The Schoellkopf card lists just three subsequent owners through 1986. In recent years the Bentley made its way overseas and in approximately 2011 it received an extensive mechanical overhaul by marque specialists Padgett Motor Engineers in England. It returned to the States shortly thereafter and has since enjoyed a life of regular use and care.Today this elegant Flying Spur presents in a gorgeous dark blue livery with understated tan coach stripes to complement the hides. It wears an older but high-quality restoration that has matured gracefully over time. The blue paintwork is glossy and smooth and the color a perfect match for the coachwork which displays crisp feature lines and tight consistent panel gaps. Some minor imperfections are evident in the finish yet only on close inspection. The doors shut with a satisfying click that reflects the superb quality of the original body. Chrome and brightwork are excellent including the bumpers and proper wheel covers with color-keyed inserts.The luxurious cabin features swaths of tan Connolly hides in excellent condition. The seats are nicely worn in showing a charming character to the leather that comes from years of regular use. The woodwork on the dash and door caps is stunning with inlaid banding and a deep glossy lacquer finish. Original switchgear and controls are excellent and the original Smiths His Masters Voice radio sits in the dash although an aftermarket AM/FM/CD player is discreetly mounted below. Unobtrusive three-point inertia-reel seat belts are fitted in the interest of modern safety.Build sheets confirm BC41LFM retains its original engine which presents with an honest and tidy character under the bonnet. The 2011 mechanical overhaul by Padgett Motor Engineers included overhauled suspension and braking systems cooling system overhaul and new exhaust silencer while the gearbox fuel system ignition and electrics also received expert attention. The current owner acquired the car following the work and has since carefully maintained it in top order. At the time of writing the car feels on the button and superbly prepared.This stunning Bentley ticks all the right boxes for the Rolls-Royce/Bentley enthusiast and collector. Combining rarity beauty and impressive performance it is a well-sorted and tour-ready motorcar that practically begs to embark on a cross-continental journey.Offers welcome and trades consideredFor additional details please view this listing directly on our website https://hymanltd.com/vehicles/6522-1959-bentley-s1-continental-saloon/

Note from the publisher:
Welcome to our collector car marketplace where we feature thousands of classified ad listings of vintage cars for sale. We hope that you will bookmark our site and visit often; our cars are updated every day. Furthermore we encourage you to subscribe to our mailing list so that we may periodically notify you of interesting classic cars that become available.
Home > Classic Cars For Sale > Bentley > S1 Continental > 1959 Bentley S1 Continental