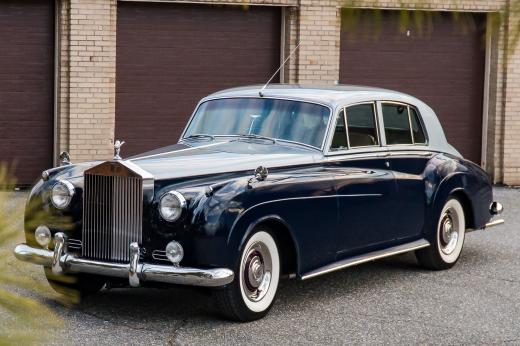 The Rolls-Royce Silver Cloud was released in 1955 with a newly restyled design that departed heavily from the pre-war influenced Silver Dawn that it was replacing. Construction of the new Silver Cloud was body-on-frame which allowed the car to be fitted with special coach-built bodies, although most examples were fitted with the standard Pressed Steel Company body shell. These Series I cars were fitted with a 4.9-liter inline six-cylinder that provided ample power. The Series II Silver Cloud was introduced in 1959, with the very little changing cosmetically. It was again offered in three different configurations, 4-door saloon, 2-door coupe, and 2-door convertible, similar to the Series I cars. The biggest change for the Series II cars was under the hood where Rolls-Royce placed their all-new 6.2 liter V8. This new V8 engine did increase the weight of the car but provided a drastic increase in acceleration and torque, with a new top speed of 114 mph. Additionally, power steering was now a standard option on the car and electronically operated windows were now available as an option. There were a few very minor cosmetic changes made to the car throughout its four-year production run before it was replaced by the newly styled Silver Cloud III in 1963. In total, approximately 2,417 Rolls-Royce Silver Clouds were produced for worldwide consumption.

The example on offer here, chassis LSTB 2 and engine number P 769, is a 1960 Rolls-Royce Silver Cloud II. It is a highly desirable left-hand drive specification model. It has been very nicely restored and remains in good mechanical condition. Included with the car is the Roll-Royce Chassis Card info which details the build of this particular vehicle. Chassis LSTB 2 was originally finished in a Sand color with a Deep Red accent line. The interior was finished in Scarlet with Scarlet piping, Fawn headliner, and red carpeting. It is denoted that this example was built to U.S.A. specifications with the following options added from the factory: R.R. Electric Windows, Plain Sundym glass throughout and Firestone white-sided tubeless tires. The car was delivered to docks in Liverpool on 2/3/1960 and shipped to Rolls-Royce New York on 2/9/1960. According to the included records, it appears the car was sold new to a Mr. Beard M.D. who resided in Cobleskill, New York. After Mr. Beard, there is not much information on the car until the current owner and consignor purchased the car in 2004 from an auction in southern Virginia. At the time, the car was very rusty and the current consignor would spend the next 6 years performing a nut and bolt restoration on the car himself. Receipts for parts and supplies for the restoration are included with the sale of this car and total over $50,000, all from reputable and reliable parts sources. It was decided at the time of restoration to refinish the car in the elegant two-tone blue color scheme it wears today, as well as to replace the interior with a charming light tan color. Nothing was left untouched on the car, and when the current consignor was done, he was left with the beautifully finished Silver Cloud II you see here today. This car has seen little use since the completion of the restoration and as such, it remains in great condition both cosmetically and mechanically and is immediately ready to enjoy and show.

Included with the sale of the car is the Rolls-Royce chassis card, receipts from restoration, jack, spare, tire pump, and flashlight.

Note from the publisher:
Welcome to our collector car marketplace where we feature thousands of classified ad listings of vintage cars for sale. We hope that you will bookmark our site and visit often; our cars are updated every day. Furthermore we encourage you to subscribe to our mailing list so that we may periodically notify you of interesting classic cars that become available.
Home > Classic Cars For Sale > Rolls-Royce > Silver Cloud II > 1960 Rolls-Royce Silver Cloud II