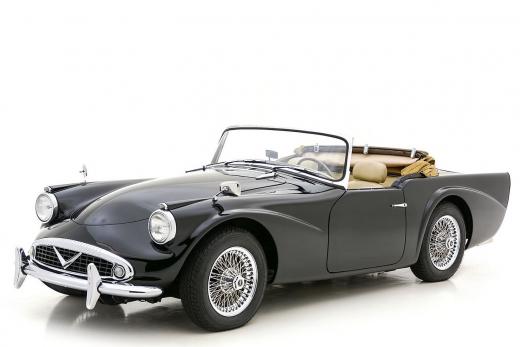 Price: USD $62,500
Daimler Company Ltd is one of the cornerstones of the British motor industry. Founded in the late 1800s as a licensed distributor of Gottlieb Daimlers internal combustion engines the firm began producing complete motorcars in Coventry before the turn of the 20th Century. Since then they created some of the finest and most prestigious British automobiles in history with the honor of being the first official auto supplier for the Royal Family a distinction they held for nearly half a century. Traditionally Daimlers were luxurious refined and relaxed cars worthy of transporting the upper class in supreme style. Through ups downs and even a scandal or two Daimler remained steadfast in their quality and commitment to tradition. Even after a takeover by Jaguar and rationalization of the production line Daimler models continued into the modern era as the softer more luxurious alternative to Jaguar.Surprisingly it took until the late 1950s for Daimler to introduce its first volume-produced sports car. At the heart of the new car was a compact V8 engine designed by former Ariel and Triumph motorcycle engineer Edward Turner. The 2.5-liter unit featured hemispherical combustion chambers a high-mounted camshaft and angled valve gear similar to Turners previous Triumph Speed Twin engine. The jewel of an engine sat in a conventional chassis (adapted from the Triumph TR3) with a live rear axle coil-sprung independent suspension and hydraulic Girling disc brakes. Atop the frame sat a flamboyant 2-seat roadster body with pronounced sweeping wings tail fins and a low wide radiator grille. Daimler selected fiberglass for its ease of production and ability to form virtually any shape. Launched as the Dart at the 1959 New York Auto Show Chrysler Corporation immediately objected and the name changed to the less dramatic SP250. With 140 horsepower and a lightweight body the SP250 was one of the fastest British roadsters of its day good for 120 mph. Early versions were not without their teething troubles but that fabulous little V8 made it easy to forgive its foibles.The SP250 was the last pure Daimler coming on the eve of Jaguars takeover in 1960. While the new management could have easily killed the project they instead invested in its development. Cars built from April 1961-onward featured a stronger reinforced chassis and numerous subtle improvements to driver comfort practicality and performance. Despite those efforts sales struggled and SP250 production ended in 1964 after only 2654 cars far short of the estimated 3000 vehiclesper yearDaimler predicted. For collectors the SP250s rarity and unique style have earned it a loyal following of passionate knowledgeable enthusiasts who dutifully keep the flame lit on the only sports car to roll out of Daimlers Coventry works.This 1961 SP250 roadster is a desirable B-Spec model featuring the improved chassis adjustable steering column and other refinements developed by Jaguar. This car is finished in a striking black livery and was the subject of an extensive well-documented restoration by The Guild of Automotive Restorers in Bradford Ontario. According to the previous owners this car spent the majority of its life in Canada where it was sold new by ODonnell Mackie Ltd of Toronto. Options include heater/demister leather-wrapped steering wheel adjustable column full-width front bumper cigar lighter and windscreen washer. Little is known of the cars early history although by the early 2000s it was in the care of an avid marque enthusiast. In 2004 he commissioned The Guild to perform the comprehensive restoration. The project spanned several years and cost more than 100000 CAD encompassing a full strip-down and respray new upholstery and extensive mechanical work.Following restoration the SP250 remained in the same owners care seeing only limited use. He sold the car to an American buyer in 2019 who performed a light recommissioning. Black suits the Daimlers shape exceptionally well and the body displays crisp feature lines and consistent panel fit particularly for a fiberglass-bodied car from this era. The paintwork has deep gloss and is quite attractive though some of the fiberglass work is visible under scrutiny. Chrome and polished stainless brightwork are in excellent order and many of the larger items like the front bumper rear overriders and grille were re-plated. The chrome wire wheels are a later addition and contribute to the cars purposeful stance. The tan pinpoint vinyl top is in good order excepting a small tear at one of the fasteners that occurred after the restoration.The gorgeous interior features light tan lambskin leather upholstery. The glove-soft hides give the car a decidedly upscale character and are in superb condition showing barely any signs of creasing from use or age. Matching material covers the occasional rear bench seat which is best for stowing your overnight bags. Darker tan carpets are excellent and the dash features original-style Jaeger instruments and simple toggle switches for the classic British roadster experience. A period-appropriate wood-rimmed Moto-Lita steering wheel falls readily to hand thanks to the adjustable column and its smaller diameter makes for sharper inputs while on the go.Providing the Go is the original 2.5-liter hemi-head V8 paired with a four-speed manual gearbox. Twin SU carburetors feed the jewel-like engine which emits an addictive burble from the twin exhausts. It runs very well and receipts show extensive work to the cooling and electrical systems. The engine compartment is tidy and clean befitting a well-restored but road-ready example.Daimlers only real foray into the sports car business may not have been the success they hoped for but it gave us one of the most memorable and distinct British roadsters of all time. This lovely example benefits from a high-quality restoration and enthusiastic care and it represents a unique alternative to the more commonplace sporty roadsters of the period.Offers welcome and trades consideredFor additional details please view this listing directly on our website https://hymanltd.com/vehicles/6620-1961-daimler-sp250-roadster/

Note from the publisher:
Welcome to our collector car marketplace where we feature thousands of classified ad listings of vintage cars for sale. We hope that you will bookmark our site and visit often; our cars are updated every day. Furthermore we encourage you to subscribe to our mailing list so that we may periodically notify you of interesting classic cars that become available.
Home > Classic Cars For Sale > Daimler > SP250 > 1961 Daimler SP250