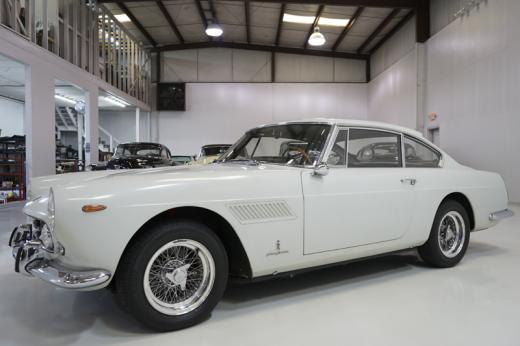 Price: USD $395,900
Mileage: 70,321
The incredible 1961 Ferrari 250 GTE Series I by Pininfarina featured here is finished in the factory original color combination of Bianco over an unrestored Nero leather interior with contrasting red carpets. This particular example, chassis number 2919 GT was the 246th example assembled with a completion date in November 1961. The first owner, Mr. Alexander of San Francisco, took delivery of the GTE at the Factory before having the car airfreighted to his home in California. Mr. Alexander took meticulous care of the Ferrari from new, having it routinely serviced by Italian car dealer Charles Rezzaghi in San Francisco until passing ownership of 2919 GT to its second owner in 1966. In 1977 David Martin of Oregon purchased the Ferrari from its second owner with approximately 50,000 miles on the odometer. Shortly after Mr. Martin commissioned a full engine rebuild of the numbers matching 3.0 liter Colombo V12 including a full carburetor rebuild and a new clutch fitted. David Martin passed ownership of the 250 GTE to his son Dale in 1996 who maintained the Ferrari for more than a decade resulting in more than 30 years of single family ownership. Numerous period photographs from the Martins ownership tenure featuring the Ferrari still accompany the car today, highlighting several Ferrari club and driving events. The 250 GTE remained on the west coast of the United States until the late 2000s. Today 2919 GT hails from a respected private collection and presents as an honest, unrestored example displaying charming patina with visible paint wear and an original leather interior displaying the expected level of wear. Its condition mirrors nearly identical of that which was described by David Martin in a 1992 report which stated the vehicle had traveled only 69,443 miles from new at the time. Less than 1000 additional miles have been added on 2919 GT in nearly 30 years, proving furthermore that this Ferrari has been under only meticulous care from new. An incredible assortment of documentation accompanies 2919 GT today including a copy of the owners manual, the original tool kit with jack and knock off hammer, previous registrations dating back to the mid 1960s, service records, dozens of back issues of the Ferrari 250 GTE Register & Newsletter, a comprehensive history report by noted Ferrari Historian Marcel Massini and more! Simply put this is one of the most original examples of a 250 GTE to be found on the market today and is the opportunity for a Ferrari collector to procure a rare and desirable model with documented ownership provenance from new, matching numbers and largely original condition. We are incredibly proud to offer this stunning 1961 Ferrari 250 GTE Series I by Pininfarina to the most astute collector or investor who appreciates the performance and legacy of the Ferrari 250 series! Classic cars have proven to be among the most resilient and rewarding investments in recent years with the Historic Automobile Group Index (HAGI) jumping 39% in 2013, 16% in 2014 and 17% in 2015 while posting gains of 467% over the last 10 years. Ready to make an investment you can actually enjoy? Pleasecontactone of our expert sales consultants for more information. They will be happy to give you a complete walk-around, supply you with a more detailed description, and answer any questions you may have. Buy with confidence. History of the Ferrari 250 GTE The Ferrari 250 GT 2+2 or Gran Turismo was unveiled the public at the 1960 Paris Motor Show and was the first large scale production of a four seater Ferrari. The Pininfarina design achievement utilized the same 2600mm wheelbase as the 250 GT Coupe and Cabriolet, however to configure it as a true 2+2 the new body was 300mm longer, 60mm wider and sat nearly 50mm lower than its predecessor. Still utilizing that classic Ferrari profile with a long hood and short tail connected by a sloping roof line, the 250 GT 2+2 was also referred to as the 250 GTE and was built until the fall of 1963 in three distinct series. In all only 954 examples were built and few remain in their original configuration today, as the 250 GTE chassis is often used as platform for 250 GTO tribute cars. Today the Series I GTE is highly prized with its grille mounted fog lights, and separated tail lamp arrangement. A light and powerful car with plenty of leg room the 250 GTE is indicative of what makes the 250 Series Ferraris so coveted today and examples are typically found in some of the worlds most premiere collections.

Note from the publisher:
Welcome to our collector car marketplace where we feature thousands of classified ad listings of vintage cars for sale. We hope that you will bookmark our site and visit often; our cars are updated every day. Furthermore we encourage you to subscribe to our mailing list so that we may periodically notify you of interesting classic cars that become available.
Home > Classic Cars For Sale > Ferrari > 250 GTE > 1961 Ferrari 250 GTE