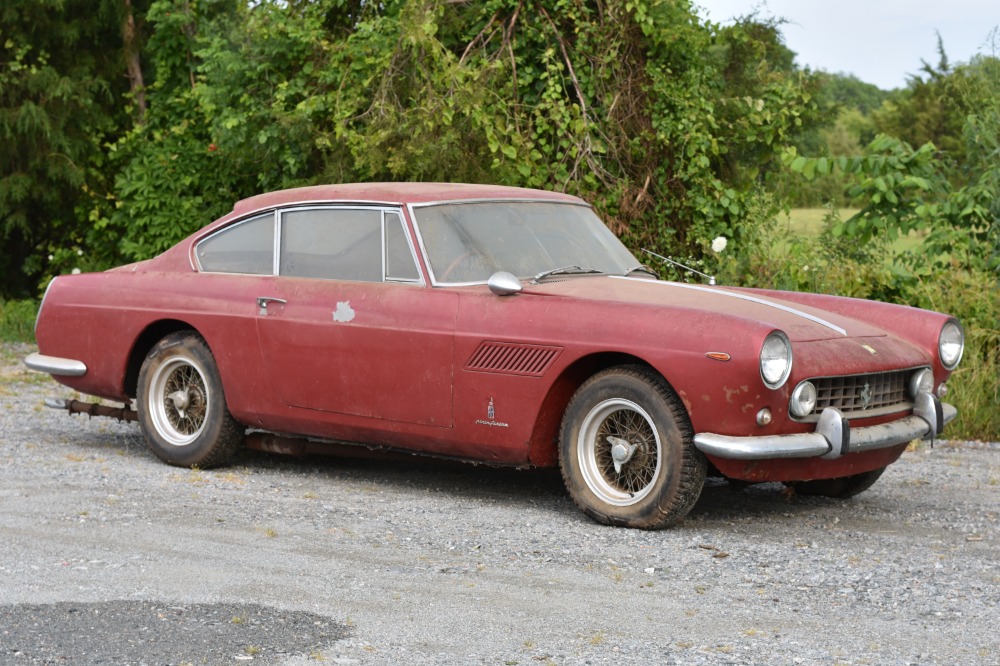 Price: USD $367,500
Truly Rare Factory RIght-Hand Drive Ferrari 250 GTE Series I Garage Find: One of only 55 Built Debuted as the vehicle assigned to the track marshall for the 1960 24 Hours of Le Mans, the 250 GTE was an immediate commercial success as Ferraris first series-produced 2+2 model. Despite its luxurious four-passenger Pininfarina coachwork, the 250 GTE was pure Ferrari, with near-perfect weight distribution and excellent handling. The GTEs thoroughbred Colombo-derived V-12 engine delivered 240 bhp at 7,000 rpm, mated to a full-synchromesh four-speed manual gearbox with Laycock overdrive on fourth. Race-bred Dunlop disc brakes were a Ferrari road-car first. Production of the 250 GTE spanned 1960-1963. Ferrari built 954 along three distinct series, beginning with 299 Series I cars, which can be distinguished by their grille-mounted driving lights, three-light taillamps, and original dashboard layout. Among this desirable series of 250 GTEs is this extremely rare RHD model, of which only 55 were ever built! Constructed in June 1961, this Series I GTE was ordered by Colonel Ronnie Hoares Maranello Concessionaires Ltd. in Surrey, England and was originally finished in the very handsome color combination of Shell Grey with orange leather trim. During its early years in the UK, this Ferrari was used as a demonstrator for the dealer, and was most notably pictured in the popular British car magazine Autosport for an article titled The Fascination of Ferrari: A copy of the article, which describes this GTE as A masterpiece from Maranello, is included with the car. The Ferraris first owner was a Mr. B. Coleman in England and he had it serviced at Maranello in 1963. Around 1965, Major R.J. Bailey bought the 250 GTE and owned it through the late 1970s - during this time the car was listed in the FOC England Membership Directory. Recently discovered here in the US after sitting in a garage for over 35 years! The Ferrari retains its original matching numbers engine, the body has been repainted dark red, and the original leather trim has been dyed black. A rare early 275 GTB/GTS steering wheel was fitted, but otherwise the car is in good, complete and original condition. It would be a perfect Ferrari to restore to show quality especially in its original factory delivered colors. This is a very rare and exciting find and a special car for Ferrari collectors in RHD markets! -Rare RHD 250 GTE - One of Only 55 Built-Outstanding Original Colors of Shell Grey with Orange-Featured in Autosport Magazine in October 1961-Matching Numbers Engine-Offered with Marcel Massini History Report-A True Ferrari Garage Find - Parked Since 1983 $367,500 Firm

Note from the publisher:
Welcome to our collector car marketplace where we feature thousands of classified ad listings of vintage cars for sale. We hope that you will bookmark our site and visit often; our cars are updated every day. Furthermore we encourage you to subscribe to our mailing list so that we may periodically notify you of interesting classic cars that become available.
Home > Classic Cars For Sale > Ferrari > 250 GTE > 1961 Ferrari 250 GTE