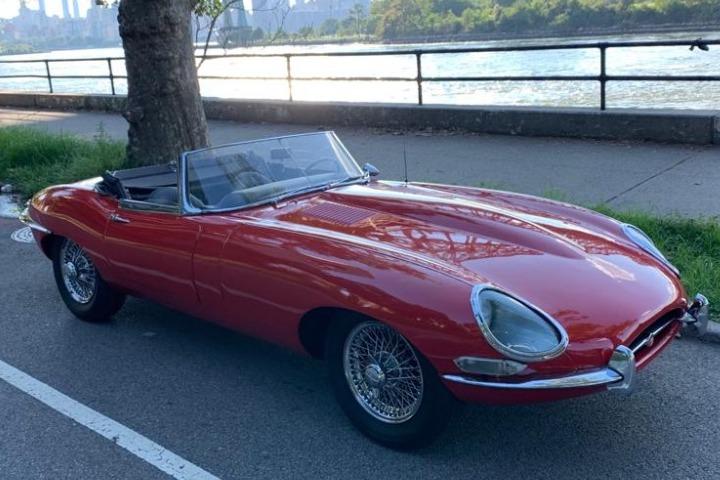 EARLY FLAT-FLOOR 1961 JAGUAR E-TYPE SERIES I 3.8 ROADSTER WITH MATCHING NUMBERSOffered here is a desirable, early-production example of the iconic Jaguar E-Type. This car was the 524th example produced, and therefore features the flat floor in the drivers and passenger footwells, the lovely aluminum trim on the center console and dash, and the more Roadster-like bucket seats. All in all, these early production examples offer the purest design and driving experience. Completed at the Browns Lane Jaguar Works on September 13, 1961, the new E-Type was configured as a left-hand drive Roadster and finished in the stunningly beautiful Indigo Blue exterior color, over a grey leather interior and blue Roadster top. The car was dispatched from the Works on September 28, 1961, and destined for Jaguar Cars of New York, USA. According to the Jaguar Daimler Heritage Trust Certificate on file, the first recorded owner was a Mr. Charles M. Donly of Pittsburgh, Pennsylvania. The E-Type Roadster is accompanied by a comprehensive history file, which documents long-term ownership between two separate enthusiasts going back to 1985, and diligent service and maintenance records. The exterior color has been changed from the factory original Indigo Blue to Carmen Red (a period-correct E-Type color), and the interior has been retrimmed in black. Gauges, brightwork, and the classic wood-rimmed steering wheel all appear to be original, and a lovely period radio is affixed to the dashboard. There are some imperfections in the paintwork, but the exterior chrome is in beautiful condition. Some corrosion is reported on the floors, but the car would pass as a great driver-level E-Type as it sits and would then be a great candidate to eventually restore back to the original Indigo Blue over grey livery. Most importantly, the car retains its original, matching-numbers engine and cylinder head. The car is offered with its Jaguar Heritage Trust Certificate documenting the matching-numbers status, a large history file containing many receipts and records, full tool set, jack, knock-off hammer and owners manuals. This charming E-Type Roadster, being an early, first production-year example with covered headlights and dainty tail lights, is considered by many to be the purest and most desirable example of the model. Early Flat-Floor Example The 524th example produced, featuring desirable early-production details Well-documented example retaining matching-numbers engine Stunning factory-delivered livery of Indigo Blue over Grey Offered with Heritage Certificate, comprehensive history file, books, tools and many spare parts $117,500

This 1961 Jaguar E-Type was listed for sale on 8-19-20 09:51:05. The vehicle color is Blue and VIN is not available . Kindly check ad for seller's location. Seller`s stock ID is gullw23440. There are other Jaguar cars currently listed for sale on our website. You may desire to see what other Jaguar cars are selling for by visiting our Sales Data page.

Note from the publisher:
Welcome to our collector car marketplace where we feature thousands of classified ad listings of vintage cars for sale. We hope that you will bookmark our site and visit often; our cars are updated every day. Furthermore we encourage you to subscribe to our mailing list so that we may periodically notify you of interesting classic cars that become available.
Home > Classic Cars For Sale > Jaguar > E-Type > 1961 Jaguar E-Type