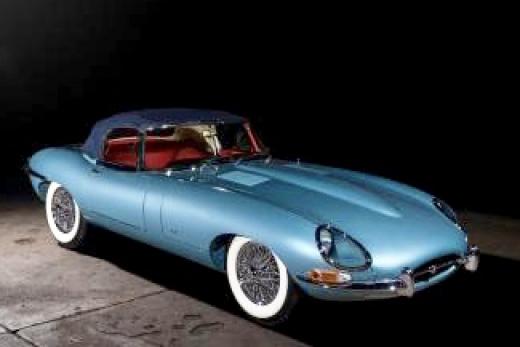 The example on offer here, chassis number 875195, fitted with engine number R1322-9, is a very early 1961 Jaguar E-type OTS. It features many interesting and highly desirable traits that were only present on early cars such as the outside bonnet latches, flat floors, welded hood louvers, body color headlight buckets, and the Pumpkin Orange finish on the head. It was completed at the factory on July 10th, 1961 and dispatched July 23, 1961, to Jaguar Cars of New York. Its first owner, R.F. Thompson of Dallas, Texas took delivery of the car on August 28, 1961. According to the included Heritage Certificate, the car was originally finished in a Bronze exterior with Biscuit colored interior and Black top. As the car sits today it is finished in a stunning Opalescent Blue with a Red interior and Blue top, the same color combination of the 1961 Geneva Show-stand car and intentionally restored to match. The current owner purchased the car in 1977 in a slightly scruffy and rough state. Over the next 35 years, the car sat while the owner hunted down and purchased any and all missing correct and date coded components for the car. During this time immense amounts of research were completed, studying the interesting and obscure attributes that set the very early cars apart from other E-types in order to make sure that the restoration of 875195 car was done to exacting standards. In 2012 the restoration was started, the owner undertaking most of the work, including initial disassembly and all mechanical/engine work. All paint and bodywork was done by marque specialist Lindley Motors of Sanatoga, Pennsylvania. Once the paint and bodywork was done, the owner completed reassembly of the vehicle in order to make sure it was done to the absolute highest standards. The restoration of the car was finished in 2015 at which time it was shown and judged at a national JCNA event scoring an outstanding 99.970. If the judging scores were not enough to prove the quality of the restoration, merely looking over the car leaves the viewer in awe of the quality and time spent making sure everything was absolutely correct and finished to the highest level possible. Since its painstaking restoration, this E-type has only seen 400 extremely carefully driven miles and it shows in the way the car still presents in a top-notch manner 3 years later. The attention to detail on this car provides a very unique opportunity to acquire a rare piece of Jaguar history that gives an outstanding look into the early production of the now iconic Jaguar E-type. Included with the sale of this vehicle are JDHT Certificate, JCNA judging sheets, original numbers matching transmission, bell housing, and radiator, Tools (in a spare mounted box as well as a tool roll), and spare tire wearing the correct whitewall tire.

Note from the publisher:
Welcome to our collector car marketplace where we feature thousands of classified ad listings of vintage cars for sale. We hope that you will bookmark our site and visit often; our cars are updated every day. Furthermore we encourage you to subscribe to our mailing list so that we may periodically notify you of interesting classic cars that become available.
Home > Classic Cars For Sale > Jaguar > E Type > 1961 Jaguar E Type