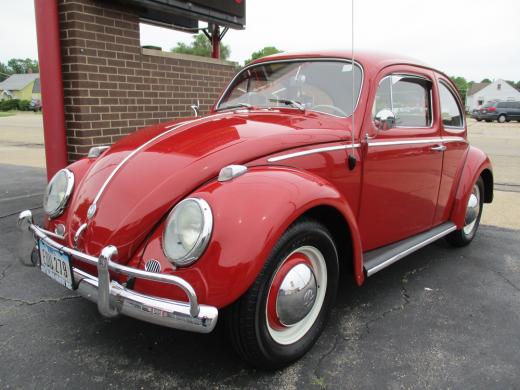 Mileage: 48,605
The Volkswagen Beetle is a two door, rear engine economy car that was manufactured and marketed by Volkswagen from 1938 until 2003. With 21,529,464 produced, the Beetle is the longest running and most manufactured car of a single platform ever made. Although designed in the 1930s civilian Beetles only began to be produced in significant numbers by the end of the 1940s due to World War II. The original 25 hp Beetle was designed for a top speed around 100 km/h. As Autobahn speeds increased in the postwar years, its output was boosted to 36 hp, then 40 hp which is the configuration that lasted through 1966 and became the classic Volkswagen motor. 1960 models received a front anti roll bar along with hydraulic steering damper. For 1961, significant technical advances occurred in the form of a new engine and transmission. The engine remained at 1,192 cc but the power increased to 40 hp primarily due to an increase in compression ratio to 7.1:1. The single-barrel Solex carburetor received an electric automatic choke, the transmission was now synchronized on all forward gears and the traditional semaphore turn signals were replaced by conventional flashing directional indicators worldwide. This particular example has been frame on restored in the last couple of years at a cost of just under $16,000. During the restoration it was repainted in its original color of Poppy Red, the engine was completely overhauled and a new transmission was installed. Other notable upgrades include the LED head lights and tail lights, the 4 wheel disc brakes with all new lines and master cylinder, an all new front suspension, undercoating, new gauges, an upgraded stereo and new tires. No expense was spared in making this a very reliable daily driver. The current owners interests have changed which is why we are selling this for such a fair price. If you could see yourself cruising around in this sweet old bug you better pick up the phone before its too late!

Note from the publisher:
Welcome to our collector car marketplace where we feature thousands of classified ad listings of vintage cars for sale. We hope that you will bookmark our site and visit often; our cars are updated every day. Furthermore we encourage you to subscribe to our mailing list so that we may periodically notify you of interesting classic cars that become available.
Home > Classic Cars For Sale > Volkswagen > Beetle > 1961 Volkswagen Beetle