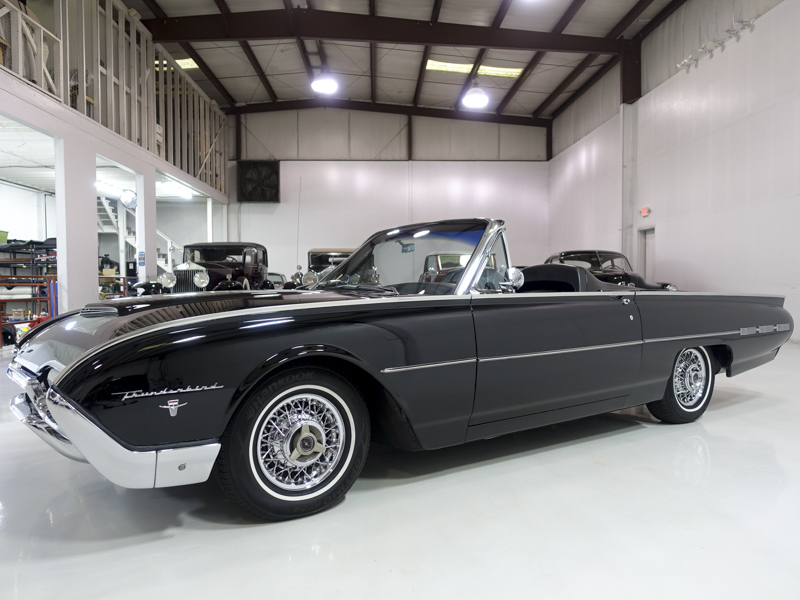 Price: USD $46,900
Mileage: 40
Ford Motor Company introduced the third generation Thunderbird in 1961. The new sleek, aerodynamic design was influenced by the fighter jets of the era and gave the Thunderbird a ready-for-takeoff appearance that some found inspiring. President-elect John F. Kennedy used 50 examples of Fords new entry-level luxury model in his inaugural parade. The pinnacle of the third generation Thunderbird was the Sports Roadster package which was introduced in 1962 and only offered through the 1963 model year. The Sports Roadster was accented by special badging, a color matched passenger dash grab handle, and Kelsey-Hayes chrome wire wheels with knock off style hubcaps. However, the primary difference was the removable tonneau cover that sealed off the back seat that didnt limit the use of the power convertible top when in place. This striking addition transformed the four seat arrangement into a sporty two seater that was reminiscent of the first generation Thunderbirds that were introduced in 1955. Only 1,427 Sports Roadsters were built for 1962; they were desired by many yet purchased by few. Today they have become the most sought-after model of all third generation Thunderbirds.

The 1962 Ford Thunderbird Sports Roadster featured here is finished in the stunning factory color combination of Raven black over black interior and matching black power folding convertible top. This particular example has been meticulously restored with restoration and service invoices totaling nearly $75,000 between 2017 and 2018. As a genuine body code 76B Sports Roadster, this example is one of only 1,427 built and is finished with power steering, power brakes, power windows, leather seats with power drivers seat, Kelsey Hayes chrome wire wheels and more! Simply put this is one of the best restored examples of a genuine Sports Roadster to be found on the market today and will certainly bring many years of enjoyment to its future caretaker.

Note from the publisher:
Welcome to our collector car marketplace where we feature thousands of classified ad listings of vintage cars for sale. We hope that you will bookmark our site and visit often; our cars are updated every day. Furthermore we encourage you to subscribe to our mailing list so that we may periodically notify you of interesting classic cars that become available.
Home > Classic Cars For Sale > Ford > Thunderbird > 1962 Ford Thunderbird