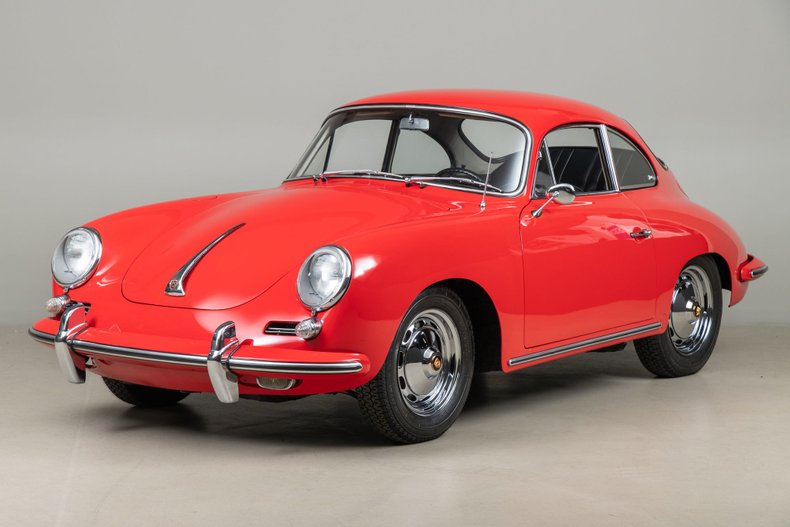 View high resolution photos Same owner for over 52 years Southern California car since new, 2 owners Original interior Matching numbers engine and transmission Porsche Certificate of Authenticity Large collection of maintenance receipts Includes original owners manual, tools, jack, and spare Often times the visual that comes to peoples minds when early Porsches are mentioned is the classic and iconic Porsche 356. With its timeless styling that evolved over the course of its 10+ year production run, increasingly gaining power and handling improvements during that time, it became a well-known and well-liked sports car. With space for two front passengers and 2 slightly smaller passengers in the back, it became a sports car that could be argued as practical. No doubt helping with its popularity, the 356 would cement itself as one of the all-time greats of early sports car design and still reflects that today with its enthusiast base and strong values. This numbers matching 356B coupe completed production at the Porsche factory on July 25th, 1962 according to its Porsche Certificate of Authenticity. Painted in Signal Red with a black leatherette interior, it was optioned with two headrests, chrome wheels and continental tires. Its first owner was based in Southern California who purchased it new, although the real story begins Dan Wier, the second owner who purchased the car in 1967, and kept the car for over 52 years. In the large collection of receipts that he saved he has one of his earliest recorded services dating August 11th, 1969. Included with the car is an expansive stack of invoices for maintenance done over the past 50 years. For the first 10 years of ownership Dan drove the car daily to and from work then approximately for 10 years Dan used the car intermittently, taking it for weekend drives in Southern California. Then, around 1987, Dan decided to store the car in his garage under a cover where it would remain until 2006. Deciding that it was time for the 356 to come out of storage, the Porsche began a lengthy process of restoring the exterior and mechanicals. In October of 2006 he had Markham Motor Works rebuild the engine and transmission as well as a few other items. After the mechanical parts were completed, he brought his beloved Porsche to Jim East Auto Painting in Orange, California. There he had the car disassembled and completely stripped down to bare metal, making small dent repairs, and gave it a fresh paint finish in its original color of Signal Red. Now that the car looked like it was new, Dan began to use his 356 for short weekend drives to enjoy and relive what it was like when he first got the car some 40 years prior. From then on Dan used Markham Motor Works in Burbank, CA exclusively as his repair shop towards the tail end of his ownership of the car. Keeping the car in running order even if it stayed inside his garage was important to him, having the mechanics visit him every few months to check on it. After owning his 356 for 52 years, Dan decided that it was time for him to let the 356 move on to another happy driver. Understanding that at the age of 78 it was becoming increasingly difficult to drive, he spoke with Bruce Canepa about his Signal Red Porsche and asked what was the best course of action. A few weeks later, the 356 arrived through Canepas doors and rolled onto the shop floor. It was inspected inside and out, cosmetically and mechanically. As part of the Canepa Difference process it was mechanically inspected and serviced as needed. It was then brought into our detailing department. The entire car was washed, foam pads used to polish the paint to perfection, and the original interior was given a delicate cleaning in order to preserve the factory finishes. The original owners manual, tools, jack and spare are included as well as the large