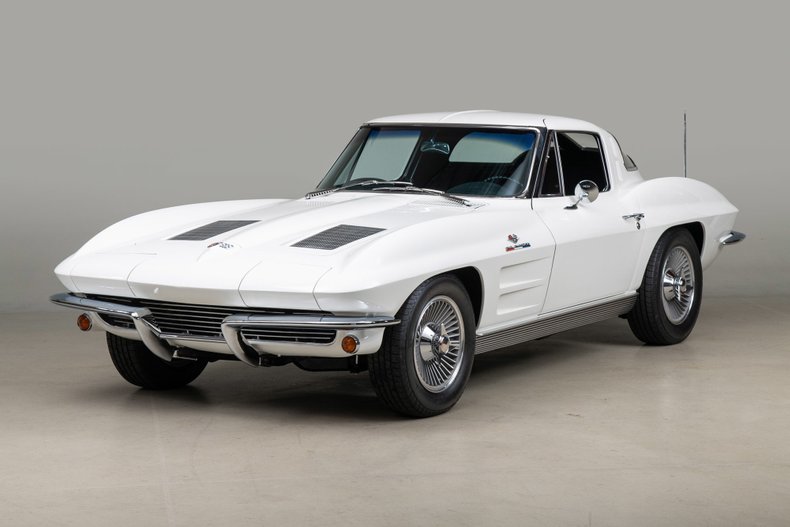 Price: Contact Seller for Price
1963 Chevrolet Corvette L84 327/360 FI VIN: 30837S104443 Early production Stingray Fulie (October 1962) 43-year continual prior ownership Original paint finish color Ermine White Highly original factory interior Original engine and transmission Original factory glass Fully serviced and concours detailed In regards to iconic American cars, there is very little that comes close to the Chevrolet Corvette Stingray. The second iteration of the Corvette lineage, the C2 took a radical departure of the original car and became a figurehead of pure 60s style. Popular in all aspects of American life, the powerful and tasteful Stingrays became synonymous with power, performance and popularity. This 1963 Chevrolet Corvette Split Window Coupe was built in October of 1962, early in the production cycle. It left the Chevrolet assembly line with its 360hp L84 5.4-liter V8 engine with fuel injection, and a 4-speed manual Borg Warner transmission. Sold new by Gene Fiedler Chevrolet of West Seattle, WA, the Stingray remained in Washington state its entire life, only recently purchased and brought out of Washington in 2016. Mr. L. Mitson purchased the car in 1973 and would remain as the cars caretaker for 43 consecutive years. He kept the car in excellent condition, he drove only 23,402 documented miles since first acquiring the car. In 2016, a collector purchased the car from him, setting the stage for the Stingrays next phase of its life. The recent owner purchased the car with the intention of giving it a sympathetic restoration and bringing the car to NCRS show and driven-event-ready condition. With an award-winning marque expert addressing the concerns of this Corvette, every mechanical component has been addressed. The entire chassis was show prepared, suspension components were addressed and the complete underside and engine compartment were finalized and cleaned. The exterior was showing expected age-related cosmetic wear to the paint, so the decision was made to remove the paint down to the original gel coat. The entire car was carefully prepared, photographed and refinished in its original Ermine White color paint finish. During this time care was taken during each step of the paint process, allowing maximum curing time and being mindful of original factory finish levels throughout. During reassembly, the Stingray had its original factory glass installed with new rubber trim and door felt, and the door and window mechanisms were rebuilt for flawless operation. The mostly original interior is in excellent condition, transporting you back to the 60s each time you sit inside the cabin. Center knock-off wheels have been fitted for that extra bit of timeless period design. Since the car has been at Canepa, the Corvette was inspected from front to back. Once a complete mechanical inspection was completed and given a clean bill of health, the car was treated to a concours show-level detailing, part of the Canepa Difference process. With the underside of the Stingray cleaned, the car was then treated to a foam-pad polishing, enhancing the already quality luster of the Ermine White paint finish. Having had quite a few original Corvettes come through Canepas doors, this Ermine White Stingray checks the boxes for drivers and collectors. Fuel-injected power, original engine and transmission and ready for shows and driving events to boot, this 1963 Chevrolet Corvette Split Window Coupe is a must-have piece of American automotive history.

Note from the publisher:
Welcome to our collector car marketplace where we feature thousands of classified ad listings of vintage cars for sale. We hope that you will bookmark our site and visit often; our cars are updated every day. Furthermore we encourage you to subscribe to our mailing list so that we may periodically notify you of interesting classic cars that become available.
Home > Classic Cars For Sale > Chevrolet > Corvette > 1963 Chevrolet Corvette