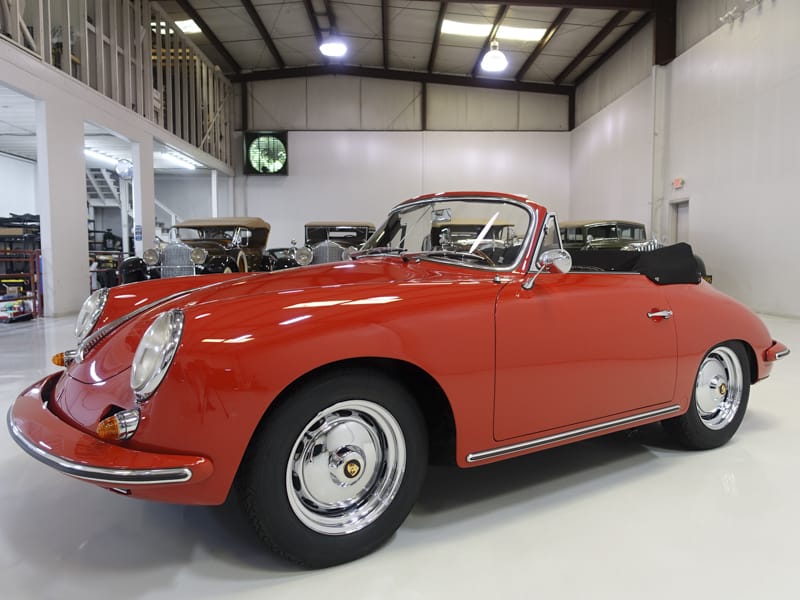 Price: USD $1,299,900
The exquisite 1963 Porsche 356 B Carrera 2 GS Cabriolet featured here is finished in stunning Signal Red over a gorgeous black leather interior and matching black folding convertible top. A copy of the factory Kardex and the accompanying Porsche Production Specifications certificate document a build date of April 1963. Shortly after, this Carrera 2 GS was purchased new by the German company Hallreiter & Vieten. In 1965 it was acquired by H.A. Jansen, who kept the car meticulously serviced by Porsche. In August 1972, this Porsche Carrera 2 GS was purchased by Werner Kuhn of Mnchengladbach, Germany, and the car remained in his possession until 1978. Walter Gratemar of Holland then procured it. Mr. Gratemer oversaw some of the restoration work and passed along ownership to a respected Danish Porsche Carrera collector in 1989. During this collectors nearly 30 year period of ownership, it was featured in several publications, including Flat-6 Magazine in 1995 and Sport & Classic Magazine in 1996. Renowned Carrera 4-cam specialist Armin Baumann was tasked with rebuilding the original numbers matching engine. In 2017, a thorough technical inspection was completed by Karl Hloch, a German Carrera specialist. At this time, the marque specialists performed a mechanical restoration at Hapke Original Restoration in Leverkusen, Germany, to ensure that all of the major components perform as new. After this, Carrera 2 was acquired by Daniel Schmitt & Co. this restoration was completed to Concours standards. An outstanding variety of documentation accompanies this Carrera 2 GS, including the original owners manual, registration book, and disc brake brochure. The factory Kardex copy, Porsche Production Specifications certificate, toolkit, invoices pertaining to the vehicles restoration, copies of two magazine articles that feature the car as well as a shadow box full of decklid grille badges from numerous 356 registries and clubs from across the globe are also included. Carrera powered 356 Cabriolets are seldom offered for sale, and this example would make an excellent addition to any premier collection. Ready to make an investment that you can actually enjoy?Classic cars have proven to be among the most resilient and rewarding investments in recent years, with the Historic Automobile Group Index (HAGI) jumping 39% in 2013, 16% in 2014, and 17% in 2015 while posting gains of 467% over the last 10 years. Please contact one of our expert sales consultants for more information. They will be happy to give you a complete walk-around, supply you with a more detailed description, and answer any questions you may have. Buy with confidence. History of the 356 B Carrera 2 GS The legendary 4-cam Carrera 4-cylinder Porsche engine was first developed for Porsche race cars by engineer Ernst Fuhrmann in the summer of 1952, at the request of Ferry Porsche, who specified that it must be based on the existing 4-cylinder boxer layout. The goal was to create a high revving engine that could be used for competitive driving by the 1953 season. The result was the type 547 engine with four camshafts, each shaft driven, that displaced 1.5 liters and could rev to 7000RPM. It was not long before this engine proved to be a racing success. It powered several 550 Spyders to victory with a 1.5-liter class win at the 1954 Mille Miglia and another class win at Le Mans in 1953. However, it was the victory at the Carrera Panamericana that cemented the 4-cam as the Carrera engine. The new Carrera engine soon made its way into the Porsche 356 by 1955 and gave the most discerning drivers a whole new way to enjoy their Porsche though its significant cost meant that it was only purchased by the very affluent. The first 356 Carreras were capable of 120mph, a feat which made them the fastest 1.5-liter production car in the world and a fierce competitor among the racing circuits. Within a few years, competitors level of performance began to catch up, and thus further refinement of the Carrera/Fuhrmann engine was needed. To increase power, they had to increase the size, which resulted in the type 587 engine. Displacing 1,966ccs, the new engine saw its debut at the 1961 Frankfurt Auto Show with a 356 wearing a Carrera 2 Script. The 356B Carrera 2 (also known as the Carrera 2000) was capable of 125mph, and acceleration improved dramatically; a full 6 full seconds were shaved off of its 0-100mph time compared to its 1.5-liter predecessor. Costing $7,995 when new, a full $2,900 more than the pushrod equipped Super 90, the Carrera 2 was also the first Porsche production 356 to feature four-wheel disc brakes for additional stopping power. The performance of the Carrera 2 is perhaps enjoyed best in a convertible form, with speedsters and cabriolets proving to be the most desirable models for high speed touring in the European countryside. It should come as no surprise that very few models were built; only 67 356B Carrera cabriolets were assembled between 1960 and 1963. Today examples remain highly coveted by Porsche collectors, with original numbers matching examples extremely few and far between.

This 1963 Porsche 356 B Carrera was listed for sale on 7-7-19 07:11:21. The vehicle color is not available and VIN is 158183 . Kindly check ad for seller's location. Seller`s stock ID is danie407126_Carrera2GS. There are other Porsche cars currently listed for sale on our website. You may desire to see what other Porsche cars are selling for by visiting our Sales Data page.

Note from the publisher:
Welcome to our collector car marketplace where we feature thousands of classified ad listings of vintage cars for sale. We hope that you will bookmark our site and visit often; our cars are updated every day. Furthermore we encourage you to subscribe to our mailing list so that we may periodically notify you of interesting classic cars that become available.
Home > Classic Cars For Sale > Porsche > 356 B Carrera > 1963 Porsche 356 B Carrera