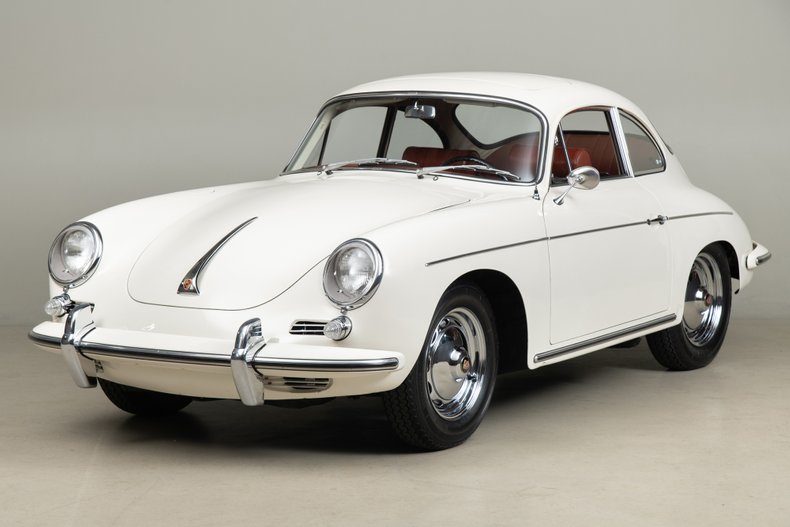 Price: Contact Seller for Price
View high resolution photos Factory electric sunroof, original leather seating Very original and preserved 356, with 28,713 original miles Matching numbers engine and transmission Comprehensive engine, suspension and brake system rebuild in 2016 Matching body panel numbers Has Kardex, owners manual, original shipping tag and promotional documents Often times the visual that comes to peoples minds when early Porsches are mentioned is the classic and iconic Porsche 356. With its timeless styling that evolved over the course of its 10+ year production run, increasingly gaining power and handling improvements during that time, it became a well-known and well-liked sports car. With space for two front passengers and 2 slightly smaller passengers in the back, it became a sports car that could be argued as practical. No doubt helping with its popularity, the 356 would cement itself as one of the all-time greats of early sports car design and still reflects that today with its enthusiast base and strong values. This matching numbers Porsche 356B 1600 Super was finished by the Porsche factory on June 10th, 1963. According to the Kardex, the car was optioned with Ivory paint over red leather. Some of the additional options included the rare electric sunroof, chrome plated wheels, and its decorative molding. Its first owner was Colonel Walter W. Long of Chicago, IL. It is believed that Long took European delivery of the car and enjoyed the 356 for a little while before shipping the car home. This is due to the finish and delivery date on the Kardex being the same date, as well as the first maintenance service of 400km being completed by Rossel, Wiesbaden on June 26th, 1963. Once the car arrived on U.S. soil, it received its second service at Hoffman Motors on November 3rd, 1963 with 1,981 miles on the odometer. On March 6th, 1971 Walt took the car to Wilgner Tire, Inc in Albuquerque, New Mexico for new Michelin tires and tubes with an indicated 19,592 miles on the car. The ivory 356 would go through various caretakers over the years, before emerging in Colorado around 2011. Ernst Benzien was a major collector on the east coast with a stunning collection of original Porsches. He purchased the car between 2011 and 2012 to be a part of his growing car collection, most of which were Porsches. The car had been repainted in its correct Ivory paintwork, but the rest of the car remained original and true to how it left the Porsche factory. He kept the car until 2016 when he passed away, and his entire collection was sold to new owners. This particular original 356 found its home in Los Angeles as part of the owners small-but-growing Porsche collection. Before the car was shipped to Southern California, the car was thoroughly gone through by Automobile Associates of Canton, Inc. of Canton, Connecticut for an intensive and thorough servicing. The 356 was treated to a full engine rebuild and tuning, with major suspension components replaced including shocks, tie rod ends, and sway bar bushings. The front wheel bearings were disassembled, cleaned and then repacked. The entire brake system was gone through and addressed, replacing all brake shoes, springs, wheel cylinders and hoses along with the brake master cylinder. The carburetors were rebuilt, gearbox resealed, with the steering damper and steering coupler also replaced. Once the service and maintenance were completed, the 356 had amassed a bill of $18,581.12, thoroughly ensuring that all of the mechanical items were addressed and had been taken care of. Once the car arrived in Los Angeles, he kept the car inside of a storage facility in order to preserve the car. After enjoying the 356 for almost 3 years, the car arrived at Canepas facility. One of the first things Bruce Canepa takes part in when a new arrival comes to Canepa is looking over the det

This 1963 Porsche 356B Coupe was listed for sale on 7-14-19 06:17:17. The vehicle color is White and VIN is 124802 . Kindly check ad for seller's location. Seller`s stock ID is canep5985. There are other Porsche cars currently listed for sale on our website. You may desire to see what other Porsche cars are selling for by visiting our Sales Data page.

Note from the publisher:
Welcome to our collector car marketplace where we feature thousands of classified ad listings of vintage cars for sale. We hope that you will bookmark our site and visit often; our cars are updated every day. Furthermore we encourage you to subscribe to our mailing list so that we may periodically notify you of interesting classic cars that become available.
Home > Classic Cars For Sale > Porsche > 356B Coupe > 1963 Porsche 356B Coupe