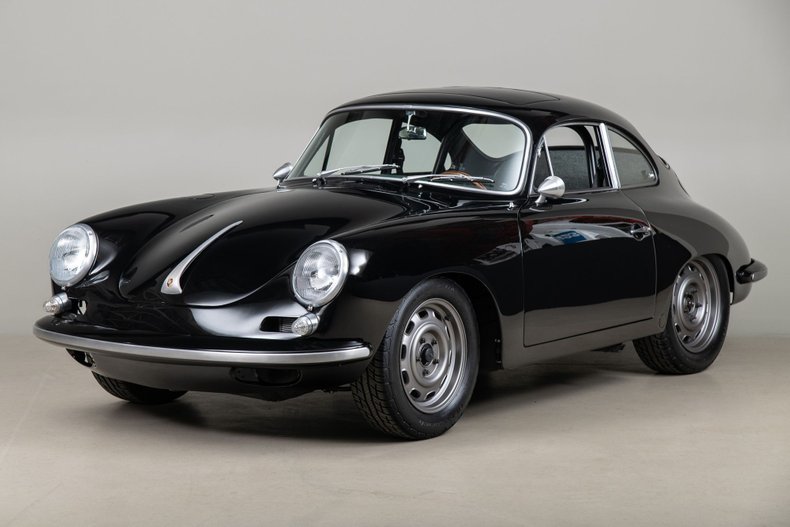 Price: Contact Seller for Price
1963 Porsche 356B Outlaw View high resolution photos Extensive upgrades performed by Willhoit Restorations Est. 130 horsepower 1925cc engine Transaxle built and geared by Rancho Transmissions Willhoit sport suspension upgrades Full leather interior trimmed by Autos International, installed by Willhoit Restoration Factory electric sunroof, KK Sebring stainless-steel exhaust Factory Porsche 356C disc brakes with slotted rotors Sorted and extremely fun to drive The building of an outlaw often reveals much about the owners personality. Some cars are built to be loud and flamboyant, others are built as sleepers to remain under the radar. Regardless of the outcome, the details on each car speak to the preferences and priorities of the owner. This stealth black 356 went for the latter, riding far under the radar and with its true intentions revealed by its subtle details. Whether its the 130hp air-cooled engine shouting through its stainless-steel exhaust system, its mega stance with 16 alloy wheels or the fact that it will pull away from more powerful cars, its the perfect fit. This particular 356 began its life as an outlaw approximately 10 years ago when its current owner decided to treat it to a cosmetic restoration. During this time, the car was stripped down to the bare metal in order to perform metal finishing, bodywork, and finally applying the stealth black paint finish that exists today. After doing the cosmetic restoration to the Porsche, the owner decided that he wanted to go all out and make it into a hot street outlaw. What transpired was a complete build that addressed everything from power to handling to its interior. The air-cooled flat four engine increased to 1925cc by Air Power Racing, with a stout est. 130 horsepower. A ceramic-coated KK Sebring stainless-steel exhaust ensured a better-flowing and much better-sounding exhaust note. The 4-speed transaxle was built by Rancho Transmissions, shifting effortlessly and easily putting down the newfound air-cooled power. With the upgraded engine now pumping out more than double the stock horsepower of a 356B, the cars underpinnings needed an upgrade and an upgrade did they receive. Willhoit Restoration, artisans in all things 356s, went through the Porsche and updated everything to match the engines new power output. Willhoit went to work, disassembling the 356 down to its individual components. Willhoit sport suspension with stiffer torsion bars, sway bar and shocks were installed to sharpen the handling. 5.5x16 HRBB alloy wheels were added with wider tires, and factory 356C disc brakes and slotted rotors were added to complete the suspension upgrades. While the car was disassembled for its suspension work, the entire cars paint finish was color sanded and paint corrected, producing a deep gloss from the black paint work. During reassembly, Willhoit added 356 GT deco trim to the front of the car, giving a final nod to what people might consider the factory outlaw. Not to be ignored, the 356s interior was also given a much-needed upgrade. Autos International created a full leather interior that was installed by Willhoit Restoration, adding GT seats that were wrapped in the same green leather. A factory removeable roll bar was fitted, a custom 14 wood VDM steering wheel was crafted by Bruce Crawford, a short shifter kit was installed, the existing electrical system was replaced with a 12-volt system, with the finishing touch being GT gauges. Upon arriving at Canepa, the outlaw was inspected from front to back and given a checklist of what items needed to be addressed. The car was given a full mechanical inspection and servicing as needed, then sent to our detailing department where it was given a full detailing. The black paint finish was polished using only foam pads to bring a deep luster to the surface. The interior was thoroughly clea

Note from the publisher:
Welcome to our collector car marketplace where we feature thousands of classified ad listings of vintage cars for sale. We hope that you will bookmark our site and visit often; our cars are updated every day. Furthermore we encourage you to subscribe to our mailing list so that we may periodically notify you of interesting classic cars that become available.
Home > Classic Cars For Sale > Porsche > 356B > 1963 Porsche 356B