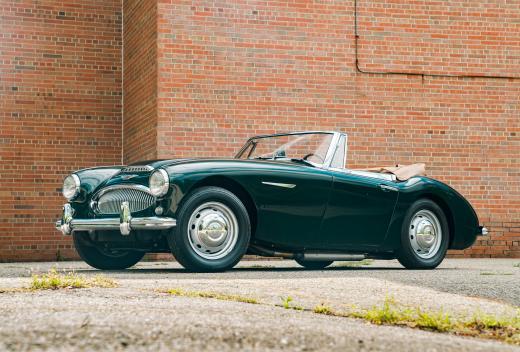 First introduced in 1959, the Austin Healey 3000 was produced as a logical successor to the much loved 100-6 model. Throughout its 8 year production run the 3000 sold very well and was highly successful in amateur racing events throughout Europe. The Mark III version of the 3000 was introduced in early 1964 and brought with it a more powerful engine as well as some additional modifications that provided for a better driving experience. The phase II as introduced with some minor chassis modifications to provide for better ground clearance. In total, a little over 17,700 Mark III cars were manufactured for worldwide distribution. Production ended in 1957 with intent for the slot of the car to be replaced by the straight-six powered MGC.

The example on offer here is a 1964 Austin Healey 3000, chassis number HBJ8L25663 and engine number 29KRUH452. This is a Phase 1 example with seldom seen early MKIII features and is a numbers matching car per the included BMIHT certificate. According to the certificate, the car was built between December 23'rd and 31'st of 1963 and dispatched January 15th, 1964 to Compton California in the United States. When it originally left the factory it was finished in Colorado Red with a Black interior and top. It was also fitted with wire wheels, heater, adjustable steering column, black tonneau cover, overdrive, and roadstead tires. As the car currently sits it is finished in very appropriate english colors of British Racing Green with a tan interior and top. The car currently also sits on a set of excellent, period optional Dunlop steel wheels, a nice change from the standard spoked wheels. As far as history on the car goes, it was delivered new to California where it spent most of its life until about 2010 when it was purchased by the current owner as a California blue plate example still wearing its original colors. The current owner decided to undertake a restoration of the vehicle and decided on the current color scheme. The restoration was extremely detailed and done to the highest standards, thoroughly documenting the entire process with every receipt saved and recorded. The car was stripped down to the chassis and built back back up utilizing all new, refurbished, or NOS components. The restoration was completed about a year ago and minimal miles have been put on the car since. Included with the sale of this car is the BMIHT heritage certificate, tools, spare, jack and documentation.

Note from the publisher:
Welcome to our collector car marketplace where we feature thousands of classified ad listings of vintage cars for sale. We hope that you will bookmark our site and visit often; our cars are updated every day. Furthermore we encourage you to subscribe to our mailing list so that we may periodically notify you of interesting classic cars that become available.
Home > Classic Cars For Sale > Austin Healey > 3000 MK III > 1964 Austin Healey 3000 MK III