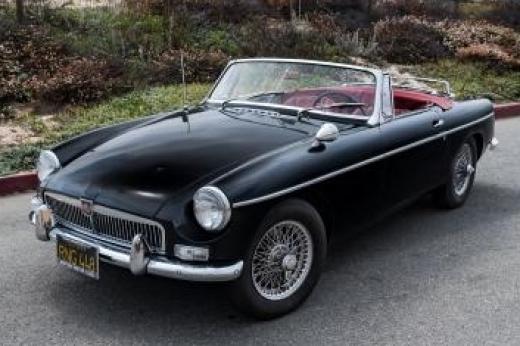 The British have always been known for their two-door, small size, low displacement sports cars. It is an excellent combination that provides good road manners and a fun driving experience at an affordable price. When the British Motor Corporation introduced the MG B in 1962 it once again ticked all the classic British roadster boxes in a fantastic manner.

With the MG series getting a little long in the tooth and old in technology, BMC (later British Leyland) decided that it was time for something new. What they introduced in 1962 was the MG B, utilizing a monocoque structure instead of the body-on-frame contraction that had been the standard until that point. Engine, brakes, and suspension were essentially carried over from the A to the early B's although the engine was slightly enlarged to give it a slightly more punchy 95 bhp. The early cars used the same 3 bearing engine as the MGA but this was later switched to a more robust 5 main bearing design in October of 1964. The space within the car was designed to give the driver and passenger more room while still providing ample space for storage of luggage etc. The MG B is one of the most popular roadsters to come out of Britain and enjoyed an 18-year long production run with 523,836 cars being sent worldwide.

This particular MG B, chassis number GHN3L/51533 and engine number 18GB-RU-H3197, is a numbers matching example per the included BMIHT certificate. It was built from November 5th to the 9th of 1964 and dispatched on November 9th, 1964 to the United States. Being as it was produced in late 1964 it is a highly desirable transition car meaning it has the later 5-main bearing engine but physical features of the early cars like pull-type door handles. The car is in extremely original and in unrestored conditions, wearing the same finishes as when it left the factory in 1964. According to the Heritage Certificate, factory fitted accessories include wire wheels, heater, red tonneau cover, parkway hood, ashtray, overdrive, mph speedometer, and an oil cooler. Believed to have been sold new to a resident of California, the car was bought in 2007 by Mr. Michael Bunney, from the original owners family. It was thoroughly mechanically sorted by Collins Classics in Bulingame, Ca and receipts for all systems total close to $20,000. A new top was fitted to the car in 2009 as well. For the next 5 years, the car spent its life in a climate controlled and well cared for storage. In 2012 the little MGB was sold to the late Robert Koons, an avid and renowned collector in the classic car world. It remained in the Koons collection for the next 6 years, lovingly maintained with special consideration being given to the astounding originality of the vehicle. As the car sits it currently has 73,000 miles on the odometer, retains much of its original paint and still wears its original black and yellow California license plates. This car represents an iconic transition car MGB with excellent history, superb originality, finished in desirable colors.

Included with the sale of this car are the BMIHT heritage certificate, jack, owners manual, and records.

Note from the publisher:
Welcome to our collector car marketplace where we feature thousands of classified ad listings of vintage cars for sale. We hope that you will bookmark our site and visit often; our cars are updated every day. Furthermore we encourage you to subscribe to our mailing list so that we may periodically notify you of interesting classic cars that become available.
Home > Classic Cars For Sale > MG > B > 1964 MG B