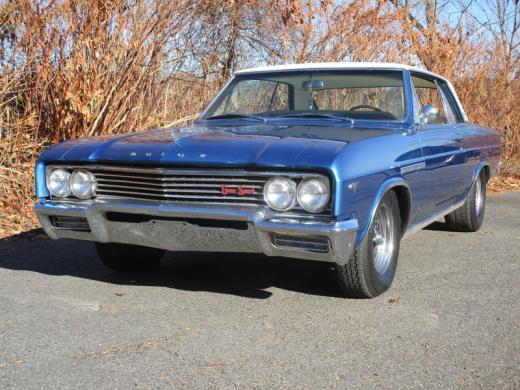 This is another from the warehouse of collector cars.

Taken as a trade, unfortunately, not a lot is known of the history of the car.

However, she is super clean, rust/rot free, has a newly rebuilt 455 big block under the hood with headers and 3" exhaust. It still has the ST300 two speed auto transmission bolted to it (which is pretty good for use on the strip) and that runs out to a 10 bolt GM rear diff and puts the power to the street with a set of BFG Drag Radials. The odometer reads only 67,000 miles.

Exhaust and shocks are recent as are the power brakes. All four are finned/vented drums. (Not AlFins)

We do know that the car was built in Fremont CA and is coded as a 2 door hardtop coupe, originally in beige over a black vinyl interior.

It has just been repainted by the current owner in a color very close to the Buick Astro Blue metallic and the seats and headliner were reupholstered in a very nice ivory that matches the vinyl top, which was redone when the paint was done.

This car is an animal and rumbles and barks like one.

Asking price is only $20,000 obo and that would be very hard to match even if you did all the work yourself.

Any questions, to schedule a time to see her, for many more photos and video, or to make an offer, please don't hesitate to contact me.

Thank you for the interest.

Back To Top
Classic car for sale by
Auto Archeologist

Note from the publisher:
Welcome to our collector car marketplace where we feature thousands of classified ad listings of vintage cars for sale. We hope that you will bookmark our site and visit often; our cars are updated every day. Furthermore we encourage you to subscribe to our mailing list so that we may periodically notify you of interesting classic cars that become available.
Home > Classic Cars For Sale > Buick > GS > 1965 Buick GS