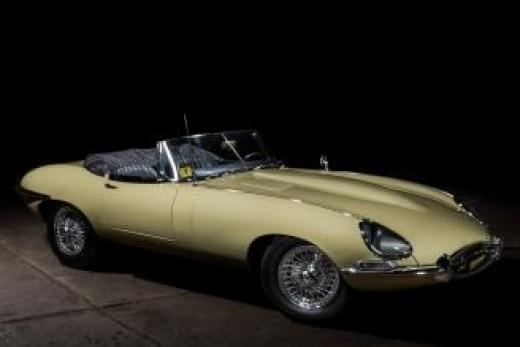 The year 1961 marked the debut of a car that is considered by today's standards, one of the most iconic and influential automobiles of the 1960s. The Jaguar E-Type erupted into the sports car world, leaving its mark on road cars to follow as well as the race track. Design-wise, the E-Type presents with such elegance and appeal, from its long sweeping front bonnet to its head-turning side profile. Numerous big name historically significant figures such as Frank Sinatra, Steve McQueen, and Brigitte Bardot all had E-Types in their garages. But there was another layer to the E-Type on top of the looks that made it that much more desirable.

The E-Type's precursors, the XK140 and XK150 achieved great success and laid the foundation for its upbringing. The E-type introduced a series of technological advancements that the sports car world had not witnessed in production cars. Utilizing an independent rear suspension resulted in massive enhancements in handling performance. Jaguar also implemented power assisted 4 wheel disc brakes that would increase braking capabilities for the street or the track and a monocoque chassis design was a first as well.

Driving an E-Type was and will continue to be, absolutely exceptional. Originally powered by a 3.8L straight 6 engine, they later received a larger 4.2L engine in 1965, that produced 265 horsepower at 5,500RPM and a 0-60mph time of 6.8 seconds. The lively engine was combined with a Moss 4-speed gearbox and standard limited slip differential. This trifecta provided a driving experience that was desperately craved by true enthusiasts. The combination of knockout good looks with ample power and performance rocketed the E-Type to monumental levels of fame that live on to today's collector car market.

The example on offer, a 1965 Jaguar XKE open two-seater with chassis #1E10310 and engine #7E1673-9 is a numbers matching example. Remarkably original and one family owned from new, featuring completely original paint, interior, and soft top. It is finished in the same Pale Primrose Yellow with a Black interior and Black top as when it was completed on the assembly line on November 16, 1964, according to the included Jaguar Heritage Certificate. The car was originally dispatched on December 9, 1964, to Jaguar Cars, New York, USA. The early life of this car is well-documented thanks to the extensive amount of original documentation, including the original window sticker and original purchase documentation and all the things that go with it from day one. According to the included window sticker, the suggested retail price was $5543 but the car was fitted with whitewall tires, a $50 up-charge, as well as chrome wire wheels which cost an additional $175, bringing the total suggested retail price to $5768. The retail order for the car was filled out on December 28, 1964, by Adam Motor Corporation of Camden, New Jersey for the initial buyer, Mr. Norman R. Grimm. Mr. Grimm placed a $300 deposit on the car at the time the retail order was filled out and received a discount of $468 bringing the total on delivery amount to $5000. The car was delivered and titled to Mr. Grimm on January 7, 19,65 at which time he paid the remaining outstanding balance of $5000 in cash plus a $12 fee for tags, and drove his new Primrose Jaguar home to Haddonfield, New Jersey. Mr. Grimm enjoyed the car sparingly over the next 12 years before submitting the proper documentation to surrender the plates for the car to the state of New Jersey on January 29, 1977, as documented, and parking the car in the garage attached to his home with just over 25,000 miles on the odometer. The car remained there in the garage, protected from the elements and cared for until earlier this year when it was pulled from its 41 years slumber. It was then taken to a specialty mechanic who treated the car to a thorough mechanical refreshing totaling just under $20,000. Everything that could be replaced or refreshed was gone through including, but not limited to, the fuel system, the braking system, the suspension, the electrical system, and fluids. For a complete breakdown of what was covered during this mechanical refreshment, please see the detailed service records below. Once completed, the car was taken on a few careful last drives before being consigned to us here at LBI Limited.

As the car currently sits it remains outstandingly original from the beautiful Pale Primrose Yellow exterior to the patina'd and well-loved incredibly original interior. This car has immense character to it and stands as a testament to originality and preservation and with its recent thorough mechanical servicing, it needs nothing but a loving new owner who enjoys and appreciates a real and true as delivered example. Currently, the odometer reads 25,280 miles which is believed to be the correct and true mileage. It is often a shame when cars are left off the road for decades at a time but it is situations where such storage preserves vehicles leaving them in fantastic original condition that this car currently sits in it provides the basis for extreme rarity and purity in a Jaguar E-Type that so rarely happens.

Included with the sale of this car are the window sticker and original sales documentation, complete books in pouch with warranty card and stamped service booklet, factory untouched correct spare, original jack as well as available service documentation, period maps and other related accessories.

Note from the publisher:
Welcome to our collector car marketplace where we feature thousands of classified ad listings of vintage cars for sale. We hope that you will bookmark our site and visit often; our cars are updated every day. Furthermore we encourage you to subscribe to our mailing list so that we may periodically notify you of interesting classic cars that become available.
Home > Classic Cars For Sale > Jaguar > E-Type > 1965 Jaguar E-Type