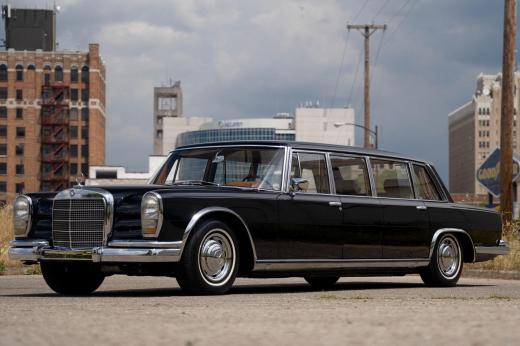 The car on offer here, a 1965 Mercedes-Benz 600 LWB Pullman, Chassis #1001412000165 was first delivered to Automotive Limited Hong Kong, China on February 17th, 1965. This company was related to Zung Fu, the official Mercedes Benz dealer for Hong Kong and China, which was founded in 1938. Hong Kong was a thriving trading hub under the British rule in 1965 and China imported almost all its foreign goods through this port. The Grosser sold new to military commander, spokesman for Chairman Mao Zedong and one of the ten founding fathers of modern China- Chen Yi. When he moved to Paris in 1919, he met Deng Xiaoping, later to be regarded as the Architect of Modern China. Deng was working at the Renault factorys labor union at the time. Returning to China in 1922, following his expulsion after participating in a mass protest, Chen joined the Communist Party. He steadily rose through the ranks, becoming the first Mayor of Shanghai in 1949. He was further promoted to Vice Premier in 1954 and ultimately became Chinas Foreign Minister in 1958. He was one of the most prolific and well-traveled statesmen, often sporting a white suit and sunglasses during his visits abroad. His entrance to international politics is marked by his appearance on the cover of TIME Magazine (26 February 1965 Edition) under the headline The Enemy in Asia Red Chinas Foreign Minister Chen Yi.

Upon its arrival in Hong Kong, Chens Grosser was immediately loaded onto a train destined for Shanghai. Once there, it was used by Chen Yi and reportedly also used by Mao Zedong during his visits to Shanghai. Cultural Revolution broke out just over a year later and Chen was accused of disloyalty and came under investigation in Feb 1967. His innocence was eventually proven and his position reinstated in 1969. Nonetheless, his Grosser fell into the hands of Shanghai Automotive Industry Corporation (SAIC), one of the Big Four state-owned Chinese Automakers. It remains a matter of debate on how this Grosser came into Chinese ownership in the first place. Was it a secret gift from the West Germany government as a good-faith gesture in opening trade talks? Or did the Chinese order it with the intention of conducting reverse engineering on one of the worlds most advanced automobiles at the time to help develop its own limousines?

As the story goes, this car was reportedly used as a base for the design and manufacturing of Hongqi (literally translates as Red Flag, which was fitting, seeing as it had flags sticking out of the bonnet), Chinas first luxury limousine used exclusively by high-ranking government officials. During the Cultural Revolution, the Grosser was put into long term storage until it was discovered in the 90s by Hans Luwich, a German engineer working for Volkswagen Shanghai (a SAIC subsidiary). Luwich acquired the car and exported it to Germany in 1993. It was featured in Germanys leading motoring magazine Autobild. A collector in the Netherlands purchased the car from Luwich before the current owners acquisition in 2014. The current owner brought the car back to Hong Kong until its shipment to Mercedes-Benz Classic Center in Los Angeles in the summer of 2018 where it received a full service.

Today, the car remains in highly original, unrestored condition with light patina in all of the right places. The opportunity to own a Mercedes-Benz 600 Pullman is extremely rare, but one that comes with such a fascinating piece of history in Sino-German diplomacy is truly an opportunity of a lifetime.

Note from the publisher:
Welcome to our collector car marketplace where we feature thousands of classified ad listings of vintage cars for sale. We hope that you will bookmark our site and visit often; our cars are updated every day. Furthermore we encourage you to subscribe to our mailing list so that we may periodically notify you of interesting classic cars that become available.
Home > Classic Cars For Sale > Mercedes-Benz > 600 LWB Pullman > 1965 Mercedes-Benz 600 LWB Pullman