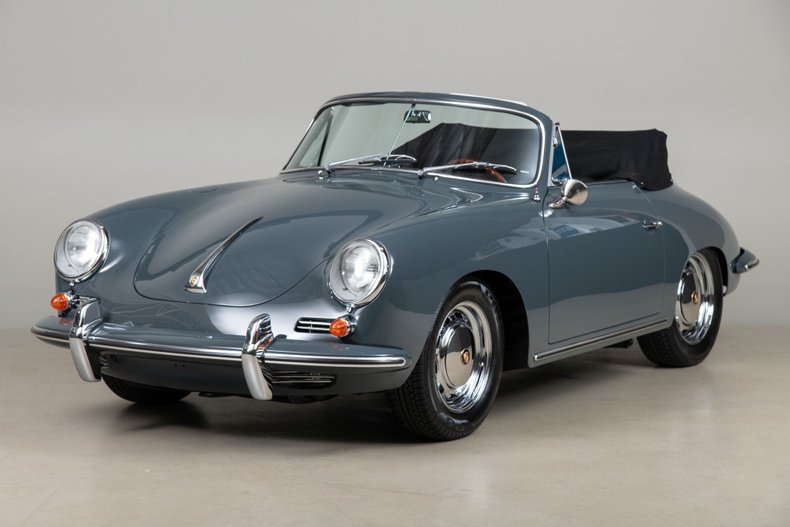 1965 Porsche 356C Cabriolet View high resolution photos Award-winning restoration California car for most of its life Copy of Kardex, factory owners manual, tools, jack, and spare Regarded as the best driving 356 model 26,170 miles = 42,117 kilometers Among Porsche enthusiasts, there is a never-ending debate about which model is the ultimate open 356. The Speedster has long been regarded as the most collectible, and does enjoy a certain purity of line that is very attractive; however, the later Cabriolet enjoy functional and mechanical updates that make the cars more pleasurable to use in the real world. Thus, enthusiasts wishing to enjoy their cars will be attracted to the 356 C Model Cabriolet, with their higher horsepower and largest displacement engines, the most refined transmission, and with increased stopping power with disc brakes, this 356 represents the ultimate evolution of the open 356. Even as the bodywork evolved to integrate larger bumpers and revised headlights, the 356C was still able to retained the timeless silhouette that brought the car to its initial acclaim. Completed in February of 1965, the 356 was sold by Cotton-Goff Porsche in Buena Park, California, and has remained a California vehicle for most of its life. It is in excellent cosmetic condition, and was restored by a previous owner, a Porsche Club of America past president, between 2000 and 2004. Once completed, the Cabriolet hit the show circuit and the fine workmanship was confirmed by numerous awards, including a First Place at the Ventura Show Porsche Competition, a second-place finish at the 356-only Dana Point Concours dElegance, and a Peoples Choice award at the North/South Meet Concours. The car is equipped with a number of rare options and accessories, including the desirable Blaupunkt radio, a Hirschmann Red-Tip antenna, and a wood VDM steering wheel. The new owner will be fully prepared for any weather condition as the car is complete with its insulated top, matching boot, and even a matching tonneau cover. The car was sold in 2008 by Gooding and Co. to its next owner who kept this beautiful Slate Grey Cabriolet in dry, covered storage in his collection, driving it only for pleasure on sunny days. He enjoyed exercising the car regularly, keeping the car in impeccable mechanical condition and was one of his favorite vehicles in his collection. The entire presentation of the car overall shows that it was lovingly maintained and cared for during his ownership. In 2012 the car arrived at Canepa and was quickly picked up by a customer who wanted to add a few things. The 6-volt system was upgraded to a 12-volt system, along with some other minor mechanical work before it went to the owner. One of his favorite cars, he kept his 356 in his garage but wasnt able to find enough time to drive it as much as he wanted to. When it recently arrived back at Canepa, the car hadnt changed in the 7 years from previous ownership. The car was mechanically inspected and serviced, and given a full Canepa concours-level detailing. The entire underside was washed, along with the engine bay and trunk area, with the interior receiving the same exacting treatment to leave every surface spotless. The slate grey paint was polished using only foam pads and light polishes, only increasing the shine of the paint finish. Now completed and ready for weekend jaunts or the show lawn, this 356C Cabriolet will treat you to one of the finest driving experiences that the 356 platform has to offer.

Note from the publisher:
Welcome to our collector car marketplace where we feature thousands of classified ad listings of vintage cars for sale. We hope that you will bookmark our site and visit often; our cars are updated every day. Furthermore we encourage you to subscribe to our mailing list so that we may periodically notify you of interesting classic cars that become available.
Home > Classic Cars For Sale > Porsche > 356C > 1965 Porsche 356C