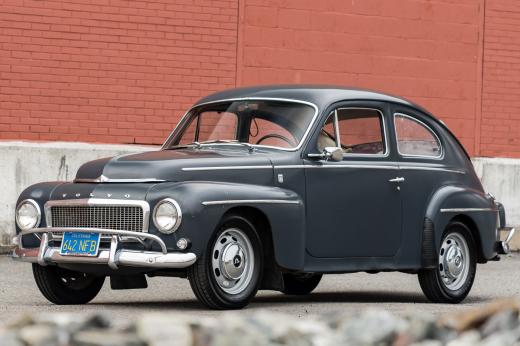 The Volvo PV444, the predecessor to the PV544, was introduced shortly after the close of WWII in order to fulfill the needs of the masses for a small economical car. The 444 was Volvos first uni-body construction car as well as Volvos first car to features a 4-cylinder engine in almost 20 years. The 444 saw massive success worldwide and entered the American market starting around 1956. The PV544 was phased into production starting in 1958. There were multiple subtle differences that set it apart from the earlier PV444 with the most important being the introduction of a 4-speed transmission as well as an upgraded power plant in the form of Volvos new B18 engine. The new 1.8-liter B18 engine had originally been developed for Volvos sporty P1800. It featured five main bearings and was available in both single and twin carburetor setups. In 1963 Volvo began production of the PV544 at their new Canadian production facility, the first such facility located outside of Sweden. The PV544 would remain relatively unchanged, despite a few minor cosmetic and mechanical changes, until the end of its production in 1966. The PV series of cars were a massive success for Volvo with approximately 440,000 cars being built and delivered worldwide over the 18-year production run.

The example on offer here, chassis number 428953 and engine number 22925, is a 1965 Volvo 544 (PV544). It is currently finished in grey with a red interior and is a well-preserved example throughout that is believed to have received only 1 respray in its life, in the correct factory color. The interior of the car is believed to be original and presents colorful patina throughout while remaining in nicely preserved condition. This 544 spent most of its life in Monterey, California where it resided with its original owner till being purchased by the current consignor out of the Pebble Beach area. As it sits today, this Volvo 544 remains in good condition with patina and character that back the originality of it scattered throughout. Mechanically this example remains in good useable condition and has been well looked after. This 1965 Volvo 544 presents as the perfect driver example for someone looking for a fun and reliable classic with plenty of character and charm.

This 1965 Volvo 544 was listed for sale on 3-20-20 10:35:45. The vehicle color is Grey and VIN is not available . Kindly check ad for seller's location. Seller`s stock ID is 20SG1855038380. There are other Volvo cars currently listed for sale on our website. You may desire to see what other Volvo cars are selling for by visiting our Sales Data page.

Note from the publisher:
Welcome to our collector car marketplace where we feature thousands of classified ad listings of vintage cars for sale. We hope that you will bookmark our site and visit often; our cars are updated every day. Furthermore we encourage you to subscribe to our mailing list so that we may periodically notify you of interesting classic cars that become available.
Home > Classic Cars For Sale > Volvo > 544 > 1965 Volvo 544