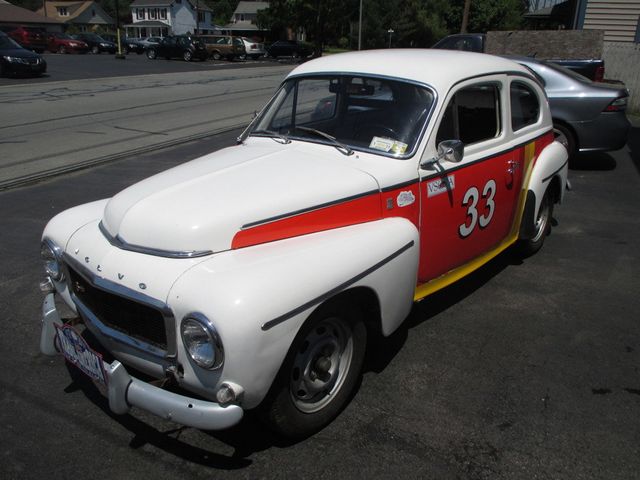 Price: USD $14,600
This is your chance to enter one of the Vintage Luxury Road Rally Events with this rust free Classic Volvo PV544 Sport with historic race graphics. This former Trans-America-New York to Alaska Historic Road Rally Car is COMPLETELY STREET LEGAL and comes complete with an electronic rally trip odometer, a smooth shifting 4 speed manual transmission, an indestructible B18 four Cylinder engine and that classic 44 Ford look that everyone loves. A rust free, street legal classic with a great history, great looks and great graphics that gets two thumbs from everyone and it runs and it drives like the famous Volvos From Hell. The 1965 Volvo PV544 was the final version of the first postwar design by Swedens long-time automaker, first introduced as the PV444 in 1944. The PV544 was also the first Volvo to have any significant impact on the American market. The Volvo PV544 differed from the PV444 by having a one-piece (instead of divided) windshield, a larger rear window, revised interior, and minor trim changes. In appearance, however, the car remained nothing so much as a scaled-down version of the 1946 Ford (both Henry and Edsel would have been flattered), with a rounded fastback two-door-sedan body, tapering hood, distinct front and rear fenderlines, rectangular grille, and low-mounted integral headlamps. Powered by Volvos own (and excellent) four-cylinder B18B engine. Built to last indefinitely and reliably even in severe climates, the PV544 established Volvos reputation for sturdiness and solid construction, which exists to this day. The Volvo PV544 was also surprisingly quick in its time, and saw sporadic competition successes in the U.S. Ultimately, it was succeeded by the more stylish (but still very upright) Amazon/120 series, which borrowed much from it mechanically. The two lines ran side by side for several years, proof enough of the PV544s staying power. - AM/FM, Vinyl Interior Surface - Contact Rich Kushner at 717-426-2202 x101 or Rich@Swedishmotors.com for more information. -