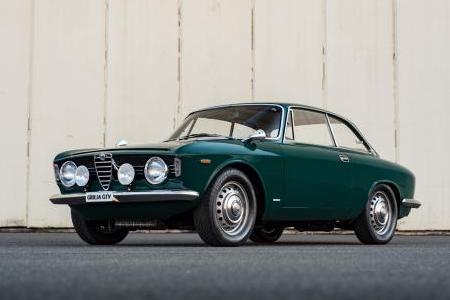 In 1963, Alfa Romeo introduced the 105 Series Giulia Sprint GT, designed by Giorgetto Giugiaro for Bertone. The design features of the Giulia were unlike anything the car world had seen before in a road car. In particular, the Scalino (Step-Nose) design was unorthodox but its odd beauty resonated among consumers. At the time, a young Giugiaro was only in his early twenties and serving his mandatory military duties in the Alpini regiment of the Italian Army. His outpost was a long way from Bertones Turin headquarters so Nuccio Bertone rented a hotel room for Giugiaro and it was in that very room where he penned the design for the 105 series Alfa. The overall shape heavily emulated the 2000 GT and 2600 GT while being perfectly portioned between the overall dimensions as well as the ratio of glass and metal. It was simplistically perfect. In 1966 the platform saw slight revisions with the introduction of the Giulia Sprint GT Veloce, receiving a 1600cc engine to replace the previous 1300cc power plant. Additional alternations included a revised front grille with three horizontal bars, the now iconic quadrifoglio badge on the C-pillar, new bucket style seats, and wood-look insert on the dash face. It essentially maintained all the design elements of its predecessor but had more horsepower and torque.

The example on offer here, a 1966 Alfa Romeo Giulia Sprint GT Veloce, chassis AR246694, is finished in beautiful Verde Muschino. Though early ownership is unknown, we do know that in 2003 it was owned by the principle of a General Motors dealership who treated it to a full engine rebuild by marque specialist, Paul Spruell in 2007. Receipts for this overhaul can be found in the View Documents tab of the listing. It lived in the Carolinas until 2016 when the current owner purchased the car with 91,252 miles showing on the odometer. Today, the car displays 91,435 miles; just 183 miles were added in the past four years of current ownership. Though most Alfa Romeos are finished in Red, this Verde Muschino colored Alfa borrows a shade of green typically reserved for British sports cars of the time period making it a standout amongst common Italian car colors. While over 14,000 of the step-nose variants were produced, many have been lost to rust, careless ownership, and accidents. To find a 1600 Veloce in this color combination with solid structural components and a largely original interior has become exceedingly difficult. The original underside is excellent with factory spot welds and rubber grommets present throughout. The originality extends to the interior where we believe the seats, door panels, and headliner are all-original, displaying an evenly distributed patina. Overall, this car is a great driver that can be taken to the next level should its new custodian have the desire to. Included in the sale are extensive mechanical rebuild receipts, jack, and spare.

Note from the publisher:
Welcome to our collector car marketplace where we feature thousands of classified ad listings of vintage cars for sale. We hope that you will bookmark our site and visit often; our cars are updated every day. Furthermore we encourage you to subscribe to our mailing list so that we may periodically notify you of interesting classic cars that become available.
Home > Classic Cars For Sale > Alfa Romeo > Giulia Sprint GT Veloce > 1966 Alfa Romeo Giulia Sprint GT Veloce