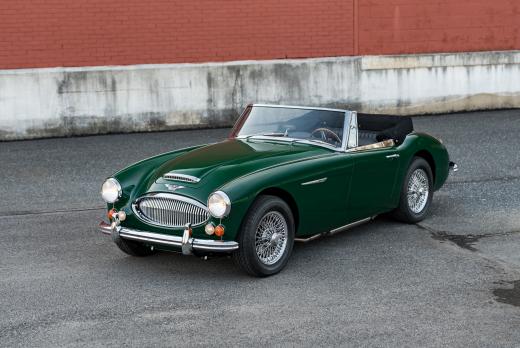 One of the most beautiful open-top roadsters of its era, the Austin-Healey 3000 is a refreshing, peppy alternative to the exclusive (and expensive) Jaguar E-type of the 1960s. Its stately styling, compact size, and lively six-cylinder engine made it popular with the motorsports enthusiasts of its time. And today, despite its strong collector value, the 3000 is still a favorite in the vintage racing circuit, where its distinctly British open-top experience is hard to match.

The 3000s DNA can be traced back to the 1952 Earls Court Motor Show, where the Donald Healey Motor Company debuted the Healey Hundred. A striking sports roadster that could reach 100 mph, the Hundred was the brainchild of automotive entrepreneur Donald Healey, who built and designed the show car out of his home attic using spare Austin parts. Sir Leonard Lord, then the chief of the Austin Motor Company, was impressed with Healeys prototypeso impressed that he offered to build the car in his factories under the Austin-Healey moniker. Lord and Healey quickly entered into a partnership that created the British Motor Corporation, whose purpose was to manufacture the Austin-Healey 100. By 1953, the 100 was already tearing up British B-roads.

By 1956, BMC reached across its powertrain portfolio and added an uprated 3.0-liter straight-six to the 100s chassis, creating the first Austin-Healey 3000. The model continued to develop throughout the 1960s, sporting higher-performance carburetors, braking systems, and camshafts that culminated in the MKIII BJ8, which launched in February 1964. By that time, power had increased to 150 horsepower, and the MKIII stayed in production until 1967. Just under 18,000 MKIIIs were produced, and today, they remain the most iconic version of the 3000.

This particular 3000 BJ8 roadster, chassis # HBJ8L34343 is presented in its original British Racing Green (color code GN29), is a well-documented example with long-term ownership. The car remained with an early owner in Maryland until October of 1975, when the car was sold to a Mr. Payne of Falls Church, VA for a grand total of $2,000. Mr. Payne drove and maintained the car on an as needed basis for over 40 years. With a recommissioning taking place in 2010-2011 by local specialist shop Healey Surgeons of Takoma Park, MD replacing suspension components, mufflers, brakes, a radiator, steering components, the fuel pump, and convertible top components. Totaling just over $15,000 of receipts at this time. Putting it back into driver status.

In 2016, Mr. Payne sold the car as a very original, running-and-driving example to a new owner, who promptly contracted British Restoration Corp (BRC), a renowned Healey restorer based in Philadelphia, PA to complete a total, nut-and-bolt restoration. In addition to complete mechanical and cosmetic restoration, BRC added a number of tasteful upgrades at the request of the customer. To sharpen performance, the shop installed a stainless-steel exhaust, a high-capacity oil pan, a high-torque starter, and a higher density radiator (while looking stock). Cosmetic upgrades included stainless-steel wire wheels, a mohair top, floor insulation, and leather seats, all of which help the cars day-to-day usability.

Since being completed in 2017, the car has covered less than 1,000 miles, and the 88,748 miles presenting on the odometer are believed to be original. Today, this wonderfully restored MKIII Phase II presents as a showroom-fresh example of one of the finest British roadsters of the 1960s. It is an ideal choice for the British motoring enthusiast who appreciates value, reliability, and a vibrant ownership community with deep ties to motorsports culture.

Note from the publisher:
Welcome to our collector car marketplace where we feature thousands of classified ad listings of vintage cars for sale. We hope that you will bookmark our site and visit often; our cars are updated every day. Furthermore we encourage you to subscribe to our mailing list so that we may periodically notify you of interesting classic cars that become available.
Home > Classic Cars For Sale > Austin-Healey > 3000 MK III BJ8 > 1966 Austin-Healey 3000 MK III BJ8