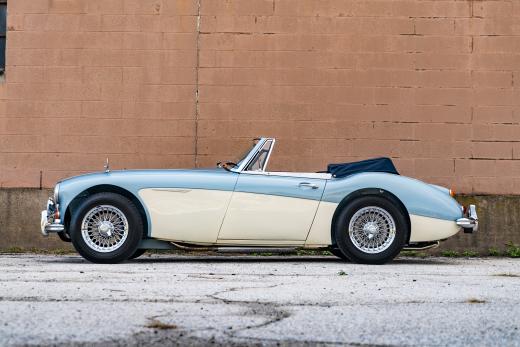 Introduced in October 1963, the 3000 MKIII was the most refined version of the popular Big Healey model line and was the last of Donald Healey's creations. The MKIII offered amenities such as roll-up windows carried over from the BJ7 series, burled walnut veneer dash, revised center console, and updated rear suspension in Phase II examples. Built between 1963 and 1967, over 17,000 were produced between Phase I and Phase II cars. Achieving 150 horse power via a twin SU carbureted inline 6 cylinder engine, the MKIII raced from 0-60 in 9.8 seconds; fast for the time period. Today, the MKIII variant is the most coveted of the 3000's and is one of the quintessential British motor cars representing lasting, and consistent value among car collectors.

The example on offer here, chassis number HBJ8L34415 and engine number 29KRUH9073 is a 1966 Austin Healey 3000 MKIII. According to the included BMIHT heritage certificate, the car was completed on December 29th, 1965 and was dispatched on January 7th, 1966 to Miami Florida in the United States. It was originally finished in Ivory White with a black top and black interior. Factory fitted equipment included wire wheels, heater, overdrive, adjustable steering column, road speed tires, and a laminated windscreen. Early history on the car is largely unknown but as the car currently sits it wears an older nut-and-bolt restoration completed to very high standards. The car is finished in Healey Blue with Cream colored coves and blue interior and top. The restoration has won the car multiple awards and remains in excellent condition. The car has been continuously maintained and features a recent full engine rebuild leaving the Healey in fantastic running and driving order. Included with the sale are the BMIHT heritage certificate and documentation of maintenance and upkeep.

Note from the publisher:
Welcome to our collector car marketplace where we feature thousands of classified ad listings of vintage cars for sale. We hope that you will bookmark our site and visit often; our cars are updated every day. Furthermore we encourage you to subscribe to our mailing list so that we may periodically notify you of interesting classic cars that become available.
Home > Classic Cars For Sale > Austin-Healey > 3000 MK III > 1966 Austin-Healey 3000 MK III