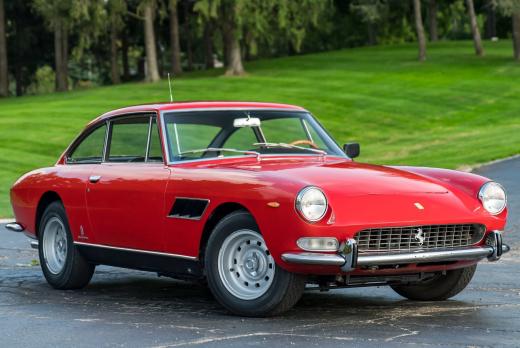 Chassis # 9183
Engine # 9183
Being Offered Out Of Long Term 30 Plus Year Ownership
In Excellent Mechanical Condition
A Nice Numbers Matching Driver Quality Example
Finished In Red With Black Leather Interior
When it was decided to replace the aging 250 GTE, Ferrari introduced the stopgap model of the 330 America in 1963. This car featured the styling of the 250 GTE but utilized the new 4.0 liter Tipo 209 V-12. The very next year in 1964, the all-new and restyled 330 GT 2+2 was introduced at the Brussels Auto Show. The new model featured quad headlights, a sharper nose, and tail and utilized the 4.0 liter V-12. In addition, Koni adjustable shock absorbers were used to improve handling. For 1965, the series II 330 GT was introduced which did away with the quad headlights in favor of a cleaner twin headlight design. Other welcomed additions to the series II cars included a five-speed gearbox, alloy wheels, and optional air conditioning and power steering. In total 1099 330 GT 2+2 cars were produced with 625 series 1 and 455 Series II cars being shipped out. The 330 GT 2+2 would be replaced by the new 365 GT 2+2 in 1967.

The vehicle on offer here, chassis number 9183 and engine number 9183, is a 1966 Ferrari 330 GT 2+2 Series II. It is a matching numbers example and has been under the same ownership for the past 32 years. It is currently finished in Red with a Black interior which is believed to be the original color scheme. The current owner acquired the car on April 23, 1987, from The Auto Show Inc. of Englewood, Colorado with a stated 92,473 miles on the odometer. Shortly after the acquisition of this car, the current owner set out on a reasonably thorough servicing and light sympathetic restoration to bring the car up to standards, both mechanically and cosmetically. Fluids were changed, the brakes were serviced, and the suspension was gone through among many other things. This work was completed by Mikes Performance Headquarters of Englewood, Colorado. In early 1988 the front seats were recovered, the back seats were dyed, and the center console was redone, among a few other things, all completed by Ts Sunrise of Englewood, Colorado. In late 1988 the engine was pulled, and a complete rebuild was undertaken. Some photos of this are available in the documents section of this listing. Moving forward, there is a consistent line of thorough service history all throughout the 1990s and early 2000s showing the car was used and cared for very meticulously. All of these receipts are also available in the Documents section of this listing. The most recent servicing, taking place in early 2016, totaled just shy of $12,000. Work completed included rebuilding the transmission, thoroughly sorting the braking system, updating cooling fans, and a fluid change amongst other things. All the work was completed by Ts Sunrise of Englewood, Colorado. As the car sits today, it appears to be a good driver quality example. The cosmetics show a number of blemishes throughout the car, but the mechanicals appear in top condition, and looking over the excellent service history of this car makes a lot of sense. Cars such as this 330 are unique in the sense that due to their cosmetic flaws from use over the years, you can thoroughly drive and enjoy them and not have to worry about the odd stone chip or ding that might occur from regular usage. The outstanding mechanical condition of this car means that it would be ideal for enjoying long drives on nice days, and the ample space and storage would make it an excellent car for touring or doing rallies. On the other side of things, this car is also the perfect candidate for light sympathetic restoration as laying new paint and cleaning up a few areas would leave the car showing beautifully cosmetically as well as having the strong mechanicals to match.

Included with the sale of this vehicle are the available service documents, factory spare wheel, jack, as well as a very nice aftermarket tool roll.

Note from the publisher:
Welcome to our collector car marketplace where we feature thousands of classified ad listings of vintage cars for sale. We hope that you will bookmark our site and visit often; our cars are updated every day. Furthermore we encourage you to subscribe to our mailing list so that we may periodically notify you of interesting classic cars that become available.
Home > Classic Cars For Sale > Ferrari > 330 GT > 1966 Ferrari 330 GT