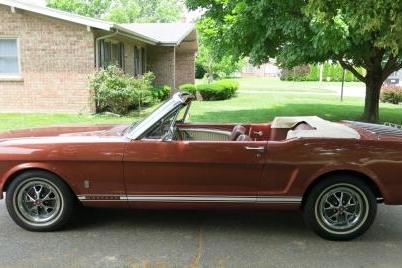 Mileage: 69,000
1966 Ford Mustang 289 C-Code Convertible (VIN: 6F08C394348), Emberglo with a cream / tan convertible top and Emberglo & parchment luxury interior, auto trans, 69,000 original miles. A very nice 2-owner C-code Mustang 289 convertible that was purchased by the previous owner on 05/05/1983 and then sent to Jerry Regynski of the well-known Mustang and Shelby restoration shop TelStar Motors in Mitchell, South Dakota for a complete freshening. The car was completely gone through incl. a repaint in the original color, a new windshield installed, complete renewal of the brakes, exhaust, electrical and cooling systems, chrome trim and rubber gaskets, and an engine freshening. The interior was cleaned and preserved but not replaced and new tires were also installed. The restoration has aged very well. This example has has power steering, a power top and factory a/c, front disc brakes but no power brakes. Decoding the VIN shows it was built in Dearborn MI (F) with a 289 2-valve motor (C). It's a convertible (08) with luxury interior and bucket seats (76B). Emberglo body (V) with parchment and Emberglo luxury interior (F4). Production of June 1966 (25F) 2.80 axle with a C4 auto trans. As a side note the exterior color Emberglo was a 1966-only color. According to Jim Smarts Production Guide, 5.6% of 1966 Mustangs were painted Emberglo (approximately 34,023 units). This Mustang has had the same owner for the past 36 years, and they decided to sell as they just didnt drive it enough. It has not been driven in the rain in over 36 years and I have stored it winters for them for the past 10 or so years. There is no rust anywhere on the car and it runs and drives very well. The convertible top and rear window are in excellent condition and the power top functions flawlessly. Both the factory clock and tach function as designed. It needs a good detail and I will have new photos available this week after that. Offered at $34,900.00 / best offer. Call or text Brian @ 812-760-5513 ~ Evansville, IN 47715.

Note from the publisher:
Welcome to our collector car marketplace where we feature thousands of classified ad listings of vintage cars for sale. We hope that you will bookmark our site and visit often; our cars are updated every day. Furthermore we encourage you to subscribe to our mailing list so that we may periodically notify you of interesting classic cars that become available.
Home > Classic Cars For Sale > Ford > Mustang > 1966 Ford Mustang