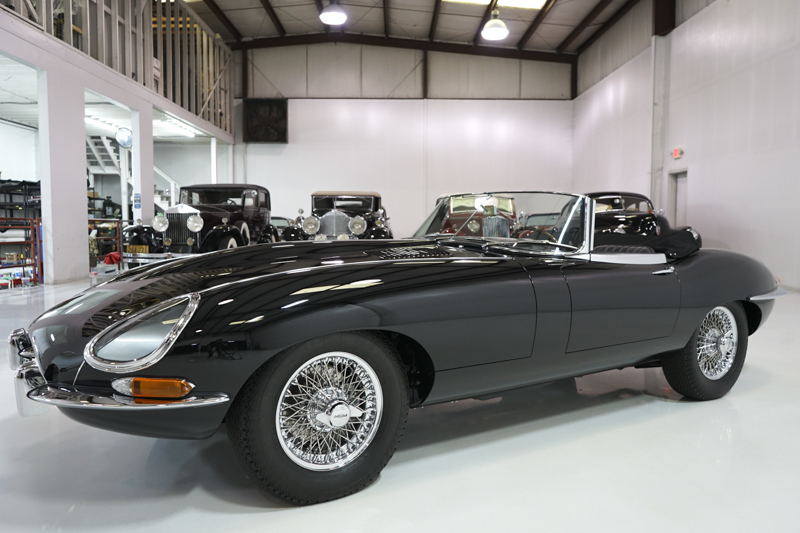 Price: USD $269,900
Mileage: 15
A car Enzo Ferrari called the most beautiful car ever made, the Jaguar E-Type is considered by many to be one of the most gorgeous automobiles ever built. It took the automotive world by storm upon its unveiling at the 1961 Geneva Motor Show and still continues to turn heads to this day. Underneath its gorgeous, aerodynamic exterior were several state of the art features. Four wheel independent suspension was at all four corners along with four wheel disc brakes that were mounted inward of the axles in the rear. A rack-and-pinion unit provided responsive steering and helped to make the E-type one of the best handling cars of the era. Power was initially provided by the 3.8 Litre straight-six from the XK150S. Producing 266 horsepower, the E-type was capable of more than 150mph. Combined, these features made the E-type one of the most celebrated sports cars ever produced with incredible power, handling, braking and style that rivaled anything else Europe produced. With such timeless appeal and praised appearance, it is no wonder why the Series 1 E-type roadster is one of only a handful of motorcars on display at the Museum of Modern Art in New York. Coveted in its day by the most sporting of drivers, the E-type still remains one of the most sought-after cars in history, especially in Series I Roadster form.

The spectacular 1966 Jaguar E-Type Series I Roadster is featured here in the special order, factory correct color combination of black over a black leather interior, black folding convertible top and matching black painted factory removable hardtop. According the accompany Jaguar Heritage Certificate, this particular example was completed at the Coventry works in September 1966 and was delivered new to Southern California where it was maintained by its first owner until the late 1960s. The E-types second owner used the Jaguar sparingly before placing the vehicle in long term storage. While his ownership tenure of the Jaguar lasted over 40 years, only 14,000 miles had accrued on the E-Type from new. Since then the E-type has been subjected to a concours quality, no-expense-spared restoration by marque specialist Shaun Saunders at his facility in Scottsdale, Arizona. The numbers matching 4.2 Litre engine was given a full rebuild and powers this stunning E-type Roadster today with just as much ease at it did when it was new! With such incredibly low mileage, concours quality restored condition, stunning factory special order color combination, excellent assortment of documentation and rare factory removable hardtop this Series I E-type Roadster is simply the best example to be offered on the market today!

Note from the publisher:
Welcome to our collector car marketplace where we feature thousands of classified ad listings of vintage cars for sale. We hope that you will bookmark our site and visit often; our cars are updated every day. Furthermore we encourage you to subscribe to our mailing list so that we may periodically notify you of interesting classic cars that become available.
Home > Classic Cars For Sale > Jaguar > E-Type Series I > 1966 Jaguar E-Type Series I