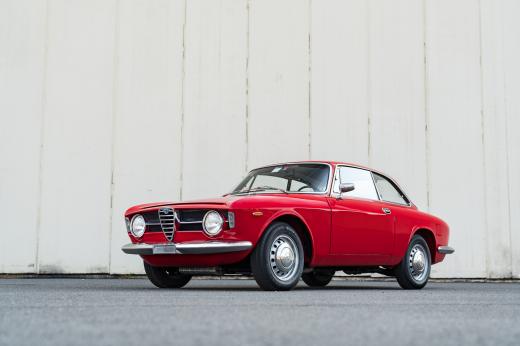 The Tipo 105.30 at a glance looks like a run of the mill GT or GT Veloce from afar. It is only in the minor details that all culminate to make one realize this was an Alfa on a budget. The reason being is that in Italy during this period, taxation on vehicles was directly related to their displacement. Thus many GT juniors were sold in Italy, and outfitted with different equipment to appeal to the budget-oriented buyer. The engine displacement is the focal point of the GT Junior. At just 1.3L it followed the same construction as the 1.6L GT and GT Veloce, but with smaller bore and stroke, as well as smaller ports for intake and exhaust. The interior received similar treatment in the way of simply getting less, along with different styled-components (such as the steering wheel). The GT Junior would see production as the through 1977 in a few different variants of the 1300 and 1600's, as well as a lightweight GTA Junior and Zagato bodied examples. Instantly recognizable by its step nose, flat front, and big lights. The GT Junior remains a unique variant of Alfa's famous Berlinetta's. A car that in period offered the ability to enjoy an Alfa Romeo, but in Italy, at a discount. Today GT Juniors are available, but great, untouched unmodified examples are far and few between.

The example on offer, a 1967 variant, Chassis # AR1215848 comes to LBI Limited from a private collection. While the history is not very well defined, we know from what paperwork we do have that the car was likely delivered new in Italy, and remained there until 2016. At which time, it was brought to the UK and shortly thereafter sold by a dealer, to the current collector owner in the US. The car reflects that of a great driver quality restoration. In viewing the photos taken during the car's repaint, one can see that it was generally a solid example, free from serious rusting or heavy accidents. It is a car that in summation can be described as inviting to drive and ready to be shown on a local level. Included in the sale are old Italian registrations and service/restoration receipts.

Note from the publisher:
Welcome to our collector car marketplace where we feature thousands of classified ad listings of vintage cars for sale. We hope that you will bookmark our site and visit often; our cars are updated every day. Furthermore we encourage you to subscribe to our mailing list so that we may periodically notify you of interesting classic cars that become available.
Home > Classic Cars For Sale > Alfa Romeo > 1300 GT Junior > 1967 Alfa Romeo 1300 GT Junior