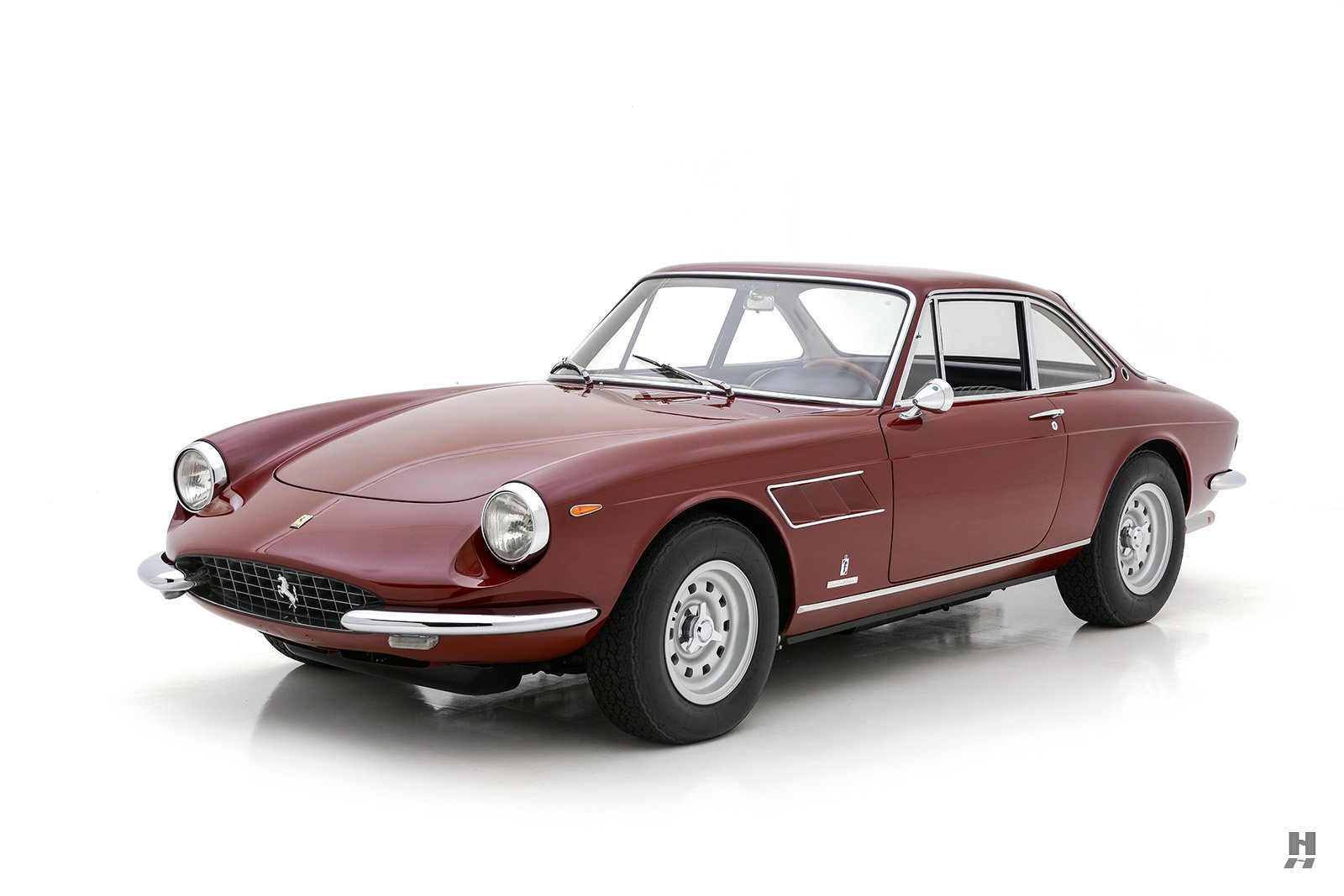 Price: USD $625,000
Throughout the mid-1960s Ferrari enjoyed a considerable run of success with its road cars. The diverse 250-series laid a solid foundation for the future production car program and machines like the sublime 275 GTB did a magnificent job of building upon that base. By the later part of the decade Ferrari had a noticeable gap between the hard-edged and sporting 275 and the softer four-passenger 330 GT 2+2 grand tourer. Ferrari recognized sufficient demand for a car that fits between those two a comfortable GT car with luggage space for a weekends journey but packed into a smaller more nimble chassis with a powerful V12 engine. Enter the 330 GTC which made its debut at the Geneva Motor Show in 1966. The elegant Pininfarina styling drew heavily from the somewhat conservative open-topped 275 GTS combining elements of the big 500 Superfast in the graceful roofline. Judged alongside the 275 GTB with its classic long bonnet/short deck proportions the 330 GTC was more open and airy but its taut compact dimensions subtly hinted at its capabilities with just a touch of aggression.Backing the gorgeous styling was Ferraris 3960 c.c. SOHC V12 engine fed by a trio of Weber carburetors to make 300 horsepower. Like the 275 GTB the GTC had a rear-mounted 5-speed transaxle to provide balanced weight distribution. Suspension was by independent wishbones and Koni dampers at all four corners with powerful disc brakes all around. The mechanical spec was relatively straightforward in Ferrari terms yet it came together with a particular harmony that made the 330 GTC one of the finest grand touring cars of all time. Comfortable fast and with superb practicality the 330 GTC is a benchmark 1960s Italian drivers car built to cover long distances at high speed all the while cosseting occupants in a richly appointed cabin. Ferrari hit a home run with the GTC with 598 examples produced between 1966 and 1968 and spawning several exclusive models including an open-roof GTS and the factory hot-rod 365 GTC. The 330 GTC is still considered one of the very best front engine V12 Ferrari drivers cars of all time and in the past 10-15 years values skyrocketed as enthusiasts rediscovered just how great it is as an all-round performance car.Presented here is a marvelous 330 GTC with well-documented history courtesy of several long-term California owners. Completed by the factory in November 1967 S/N 10927 was shipped to the official Ferrari dealer in Milano M. Gastone Crepaldi S.a.s. and the first registered owner was a Mr. Arban also of Milano. In the early 1970s the car was exported to California appearing in the care of Mr. Donald Holsworth of San Francisco by 1975. In 1977 Mr. Arthur Rude also of San Francisco bought the car and cared for it meticulously for the following 25 years. Numerous receipts along with a stack of California registration slips document the cars history with Mr. Rude who spared no expense keeping the Ferrari in prime condition during his ownership. Documents from his ownership show he had the engine rebuilt at his local dealer Walnut Creek Ferrari among numerous other services. Later the car had a high-quality bare-metal respray in the beautiful dark red shade it wears today. Other significant service work included reground cams and new rollers and a rebuilt transaxle in the early 1990s.In approximately 2003 Mr. Rude sold S/N 10927 to another California resident who carried on enjoying the car and keeping it in top order. In their tenure it was detailed to a high standard and shown at the 2009 Concorso Italiano where it garnered a class award. The most recent owner acquired the car in 2016 adding it to his significant collection of Italian cars. It presents today in excellent condition with a pleasingly matured restoration that invites regular driving. Finished in beautifulrosso amarantoand sitting on proper Campagnolo alloy disc wheels with Michelin XWX tires this 330 looks positively resplendent thanks to crisp straight bodywork and high-quality paint. The chrome trim and body fittings are excellent and the car has an appealing character thanks to years of mindful enjoyment. Panels are straight the fit is exemplary and the doors shut solidly with only a light touch. The body is well-detailed down to theCavallino Rampanteknock-offs Talbot Green Dot mirror and period-correct Carello headlamps.Inside the black upholstery presents in excellent order with a very light careworn character showing in the leather seats. The headlining door cards and parcel shelf all appear to be superb original items. Correct white-on-black Veglia instruments are in excellent condition and the center console houses switchgear for the power windows the late 70s vintage Blaupunkt cassette player and switches for non-standard air conditioning that has since been removed. Comfortable inviting and with room for plenty of luggage this GTCs cabin is equally suited for the casual weekend tour as well as the competitive historic rally. A factory tool kit and jack bag accompany the sale as does a history file containing receipts records and photos.The correct matching-numbers 4.0-liter V12 engine is in excellent order. Detailing includes proper fuel and oil lines wrinkle-finish exhaust heat shields and tags for the Bonaldi brake booster and Fispa air cleaner. The engine is tidy and clean while also displaying signs of regular use and enjoyment. In approximately 2015 it received a brand new ANSA exhaust system complete with proper aluminum heat shields and decals on the chrome tips.It is no secret that over the past decade-plus classic Ferraris have made a significant uptick in value and collectability. However the 330 GTC is particularly notable for taking a meteoric rise to Ferrari super-stardom thanks to its superb all-round ability and gorgeous Pininfarina looks. The 330 GTC stands among the best drivers cars produced by Maranello in the 1960s and it remains a popular choice for historic events and rallies. This gorgeous example is ready for regular use and will no doubt thrill its next caretaker for years to come.Offers welcome and trades consideredFor additional details please view this listing directly on our website https://hymanltd.com/vehicles/6531-1967-ferrari-330-gtc/

This 1967 Ferrari 330 GTC was listed for sale on 10-29-19 06:52:42. The vehicle color is not available and VIN is not available . Kindly check ad for seller's location. Seller`s stock ID is hyman6531. There are 90 other Ferrari cars currently listed for sale on our website. You may desire to see what other Ferrari cars are selling for by visiting our Sales Data page.

Note from the publisher:
Welcome to our collector car marketplace where we feature thousands of classified ad listings of vintage cars for sale. We hope that you will bookmark our site and visit often; our cars are updated every day. Furthermore we encourage you to subscribe to our mailing list so that we may periodically notify you of interesting classic cars that become available.
Home > Classic Cars For Sale > Ferrari > 330 GTC > 1967 Ferrari 330 GTC