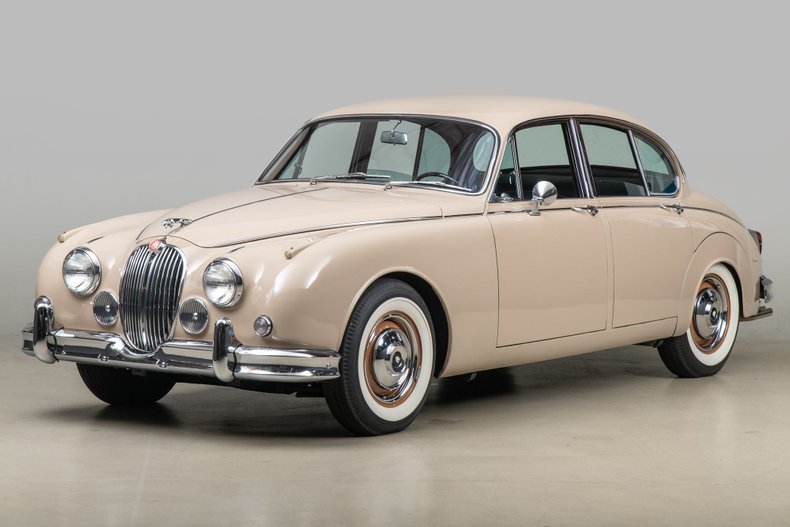 Price: Contact Seller for Price
Click here to view high resolution photos 3 California owners since new long-time single ownership, 43+ years Large collection of receipts and documentation Multiple-time car show winner Original specification Honey Beige exterior, black Connolly leather interior 3.4-liter inline six engine, 4-speed manual transmission, optioned power steering The final year of Jaguars Mark 2 production Includes original owners manual, Jaguar maintenance poster, service/parts receipts Jaguars luxury automobiles in the late 50s and 60s offered owners and drivers an affluent entry into the posh luxury market, and the 340s (previously called Mark IIs) were just that. Expanding upon the Mark I, these sedans were offered with a number of appointments that ranged from comfortable interiors, a variety of colors, and expanded powertrain choices, all while maintaining the essence of Jaguar. With their popularity rising due to the popular British TV series Inspector Morse, the Jaguar Mark II/340s were successful for the British automaker. Interestingly, they were highly popular amongst bank robbers, with their substantial horsepower, ample space for occupants, and superior handling characteristics. Widely regarded as the worlds first sport sedan, with advanced features such as 4-wheel disc brakes, a limited slip differential, a four-speed gearbox with overdrive, and a tachometer. Over time the shape and timeless design of the Mark II/340 has appreciated more and more, with increased interest among collectors over the past decade. This Jaguar 340 was reportedly first sold by Charles Hornberg Jaguar of West Hollywood, California to Dennis Mawer, painted in Honey Beige with factory copper-accented wheels. He went on to own the car for approximately 7 years before the Jaguar found its way to its new owners, Ad and Marsha Hirsch. In 1974 Ad was looking for a new car for his wife, Marsha. Originally, they thought about purchasing a Rolls Royce, although after a few days and a number of sticker shocks later they decided that they werent Rolls Royce people. One day while shopping they drove past a Ralphs Market on Devonshire boulevard in Los Angeles and saw the Honey Beige Jaguar sitting in the parking lot with a for sale sign in the window. They called Dennis Mawer and asked if they could drive the car. Marsha drove the Jaguar and loved it, and shortly afterwards the couple reportedly purchased the car for $3,250. Being an executive for an international company at the time, Marsha drove the Jaguar daily to and from work. The Jaguar was the family car, taking kids to school, going on road trips, and overall enjoyed exactly for what it was built for. Ad even recalled that he pretended to be a chauffeur for one of his nephews on his prom night, using the Jaguar as their limo for the evening. During their ownership the Jaguar was taken care of with the utmost attention to detail since they felt that Sweet Pea was truly part of the family, and was maintained by Yorks and Lancs Automotive. In 1986 Ad was involved with the movie industry with his company, and after 12 years of daily use the couple decided to restore the car completely to concours-level quality. Wanting the car to be perfect, the Jaguar was sent to Rons Custom in Van Nuys, California where it was fully restored. The entire car was stripped and the original sheet metal was repainted in its original Honey Beige color, and the interior reupholstered in black Connolly leather by Hilborn Motor Car Interiors. Ad and Marsha fully intended to still drive the car but wanted to take the 340 to shows, believing that Sweet Pea deserved to look the best that she could be. After being restored, Ad and Marsha brought their pride and joy to the Ventura Jaguar club and reportedly won first in class on its very first entry. The spare tire is original as is the too

This 1967 Jaguar 340 was listed for sale on 10-17-20 10:32:49. The vehicle color is Honey Beige and VIN is J67181330 . Kindly check ad for seller's location. Seller`s stock ID is canep6285. There are other Jaguar cars currently listed for sale on our website. You may desire to see what other Jaguar cars are selling for by visiting our Sales Data page.

Note from the publisher:
Welcome to our collector car marketplace where we feature thousands of classified ad listings of vintage cars for sale. We hope that you will bookmark our site and visit often; our cars are updated every day. Furthermore we encourage you to subscribe to our mailing list so that we may periodically notify you of interesting classic cars that become available.
Home > Classic Cars For Sale > Jaguar > 340 > 1967 Jaguar 340