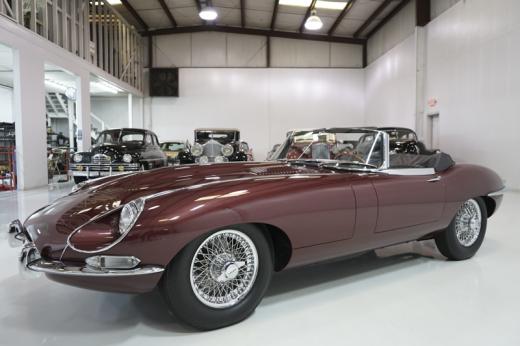 Price: USD $179,900
Mileage: 7
The spectacular 1967 Jaguar E-Type Series I 4.2 Litre Roadster featured here is finished in the stunning factory color combination of Opalescent Maroon over a black leather interior and black folding convertible top. This incredible example was completed by the Coventry works in May 1967 and was subsequently sold new to collector-owner Prof. Dean Edmonds Jr. through Auto Engineering Inc. of Lexington, Massachusetts. Mr. Edmonds, a Doctoral graduate of MIT and Professor of Physics at Boston University, is credited for his work on developing the cesium atomic clock and today is recognized with his name on the Wall of Honor in the National Air and Space Museum at the Smithsonian Institute in Washington D.C. A respected automotive collector and connoisseur in his own wright, his personal collection included several notable Jaguars and even a Bugatti Type 55 Super Sport! Mr. Edmonds was so particular that he insisted on picking up the E-type new at the port in 1967 and he drove the car himself to Automotive Engineering for its pre-delivery inspection. The rarely seen Series I arrangement is highly regarded today by Jaguar enthusiasts as these were the first E-Types to feature more comfortable seats while retaining the toggle switches on the dash and triple SU carburetor induction; a combination that is often regarded as the best variation of all Jaguar E-Types. Further research by Edmonds led him to the concluded that his E-type was perhaps the last example to be imported to the U.S. with triple SU carburetors, a feature not seen on the Series I and Series II models. With this E-type being of such significance Mr. Edmonds was often contacted by other E-Type owners who were using this example as a guide for their restoration projects. After nearly 40 years of ownership Mr. Edmonds entrusted the specialists at Manfreds Automotive Specialties in Florida to recondition his cherished E-type at a cost of over $100,000. Manfreds addressed the complete mechanical aspects of the Jaguar while cosmetic attention was given where needed to bring the E-Type back to virtually like new condition while retaining the original interior! Today the Jaguar presents in spectacular condition while having traveled only 7,237 actual miles from new. As one would expect to find from a one-owner, low mileage example and unprecedented assortment of documentation accompanies this investment grade Series I E-type including the original invoice, carbon copy of the check Edmonds used to pay for the car, service records and correspondence letters dating back from new, the original tool kit, owners manual, Jaguar Heritage Certificate, original window sticker and more. The original chrome wire wheels are still fitted with the original tires while another set of tires and wheels reside on the E-type today for safety purposes. With single collector-level ownership provenance, incredibly low mileage, unprecedented documentation and spectacular condition this Jaguar E-type is without question the finest example to be found on the market today and will certainly bring many years of enjoyment and incredible investment return to its next caretaker! We are especially proud to offer this incredibly desirable 1967 Jaguar E-type Series I 4.2 Litre Roadster to the most astute collector or investor who appreciates the best the collector car market can offer. Ready to make aninvestment that you can actually enjoy?Classic carshave proven to be among the most resilient and rewarding investments in recent years with the Historic Automobile Group Index (HAGI) jumping 39% in 2013, 16% in 2014 and 17% in 2015 while posting gains of 467% over the last 10 years. Pleasecontactone of our expert sales consultants for more information. They will be happy to give you a complete walk-around, supply you with a more detailed description and answer any questions you may have. Buy with confidence. History of the Jaguar E-Type A car Enzo Ferrari called the most beautiful car ever made, the Jaguar E-Type is considered by many to be one of the most gorgeous automobiles ever built. It took the automotive world by storm upon its unveiling at the 1961 Geneva Motor Show and still continues to turn heads to this day. Underneath its gorgeous, aerodynamic exterior were several state of the art features. Four wheel independent suspension was at all four corners along with four wheel disc brakes that were mounted inward of the axles in the rear. A rack-and-pinion unit provided responsive steering and helped to make the E-type one of the best handling cars of the era. Power was initially provided by the 3.8 Litre straight-six from the XK150S. Producing 266 horsepower, the E-type was capable of more than 150mph. Combined, these features made the E-type one of the most celebrated sports cars ever produced with incredible power, handling, braking and style that rivaled anything else Europe produced. With such timeless appeal and praised appearance, it is no wonder why the Series 1 E-type roadster is one of only a handful of motorcars on display at the Museum of Modern Art in New York. Coveted in its day by the most sporting of drivers, the E-type still remains one of the most sought-after cars in history, especially in Series I Roadster form.

This 1967 Jaguar E-Type was listed for sale on 3-22-20 10:21:14. The vehicle color is Opalescent Maroon and VIN is 1E15634 . Kindly check ad for seller's location. Seller`s stock ID is danie407350_E-Type. There are 105 other Jaguar cars currently listed for sale on our website. You may desire to see what other Jaguar cars are selling for by visiting our Sales Data page.

Note from the publisher:
Welcome to our collector car marketplace where we feature thousands of classified ad listings of vintage cars for sale. We hope that you will bookmark our site and visit often; our cars are updated every day. Furthermore we encourage you to subscribe to our mailing list so that we may periodically notify you of interesting classic cars that become available.
Home > Classic Cars For Sale > Jaguar > E-Type > 1967 Jaguar E-Type