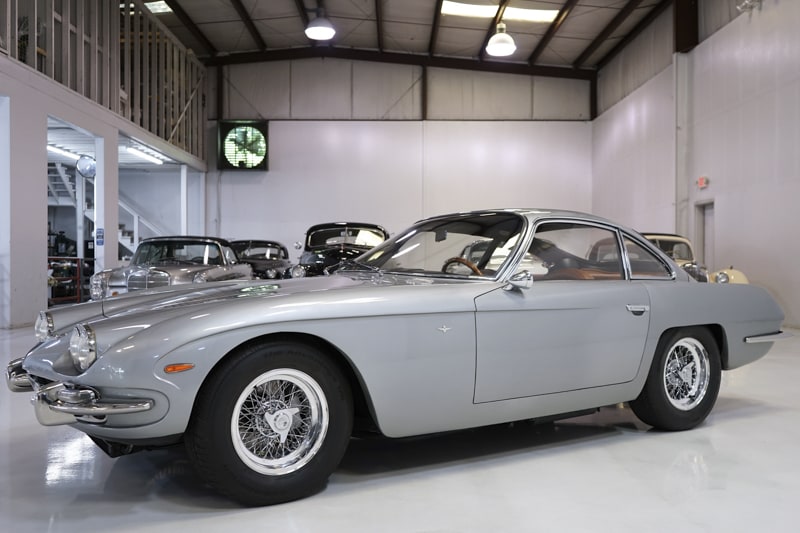 Price: USD $469,900
The incredible 1967 Lamborghini 400 GT 2+2 by Touring featured here is finished in stunning Argento silver over an impeccably kept tan leather interior. This particular 400 GT has been under thoughtful care from new and was retained by its original owner for more than a decade before being passed to its second owner in 1978, who meticulously maintained (and sparingly drove) the Lamborghini for over 35 years! In 2004 the 400 GT was discovered by a respected Italian sports car connoisseur who later had the Lamborghini inspected by noted Italian restorer Gary Bobileff who was quoted as saying that this Lamborghini is a true time capsule of a car [that is] beyond my expectations. Since that time the 400 GT has been thoroughly serviced and is in running condition today having had all of its fluids changed while the Weber carburetors have been rebuilt. Today it presents in wonderful condition with approximately 90% of the paint being original and only 28,412 miles on the odometer! The unrestored leather interior has been impeccably well-kept showing only minor use and retains that classic old-car smell. The 15 Borrani polished wire wheels display date codes from the summer of 1966 insuring that they are correct and indeed original to the car. With such low mileage and incredible, unrestored condition this 400 GT 2+2 is likely the best example to be found on the market today and is one of the most original and lowest mileage examples in existence. We are especially proud to offer this spectacular 1967 Lamborghini 400 GT 2+2 to the most astute investor or collector who understands and appreciates low-mileage and original condition. Classic cars have proven to be among the most resilient and rewarding investments in recent years with the Historic Automobile Group Index (HAGI) jumping 39% in 2013, 16% in 2014 and 17% in 2015 while posting gains of 467% over the last 10 years. Ready to make an investment you can actually enjoy? Pleasecontactone of our expert sales consultants for more information. They will be happy to give you a complete walk-around, supply you with a more detailed description, and answer any questions you may have. Buy with confidence. First shown to the public at the 1966 Geneva Auto Show the 400 GT was a further evolution of the Lamborghini 350 GT; the first Lamborghini production model. The stylish Grand Tourer was designed by Carrozzeria Touring of Milan and shared the same 2550mm wheel base as its predecessor; while the 2+2 version featured a roof line 65mm higher to accommodate the rear passenger headroom. Overall the profile still retained the original shape. The originally Bizzarini-designed 3.5 liter DOHC V12 engine was increased to 3939ccs which raised power output to 320hp and resulted in a 0-60mph time in under 7 seconds. With such incredible power, fully independent suspension, 4-wheel disc brakes and lavish leather interior the 400 GT 2+2 was one of the most coveted Italian Grand Tourers of its era and proved that the prancing bull was a tour-de-force that could run circles with Italys other famed automotive marque. Only 224 400 GT 2+2 were produced between 1966 and 1968, but it is the Superleggera bodied examples by Touring of Milan that have become some of the most sought after Italian GT cars of the 1960s by collectors across the globe.

Note from the publisher:
Welcome to our collector car marketplace where we feature thousands of classified ad listings of vintage cars for sale. We hope that you will bookmark our site and visit often; our cars are updated every day. Furthermore we encourage you to subscribe to our mailing list so that we may periodically notify you of interesting classic cars that become available.
Home > Classic Cars For Sale > Lamborghini > 400GT 2+2 by Touring > 1967 Lamborghini 400GT 2+2 by Touring