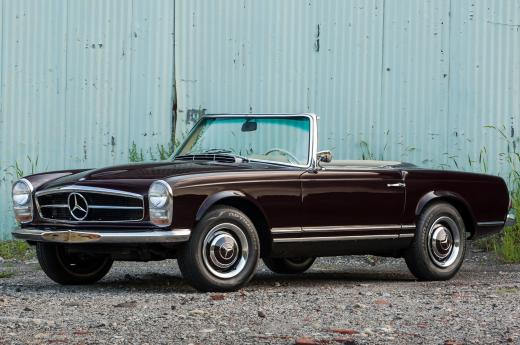 SL or sports lightweight has been synonymous with Mercedes-Benz since the advent of the 300 SL in 1954. In 1963 however, a new type of SL would be unveiled, an SL re-engineered from the ground up, which we now know as the W113 chassis or 230 SL. A revolutionary design, the 230 SL brought drastically squared proportions when compared with its predecessors, yet still combined style, reliability, and safety all into one attractive two-seater. Utilizing the monocoque chassis from the 200-series sedan, the 230 SL was the first SL to be equipped with an overhead-cam Bosch fuel injected 2.3 liter straight 6 engine, capable of achieving an impressive 120 miles per hour. Equally impressive would be its stopping power, equipped with Girling disk brakes in the front, and power-assisted drum brakes in the rear.

Mercedes-Benz engineer Mr. Barnyi is responsible for the sturdy pagoda or concave hardtop which had greater load-bearing strength, as well as narrower pillars providing improved visibility. Quality and dependability would only be proven further by Eugen Bhringer when he drove his 230 SL to victory in the grueling 1963 SpaSofiaLige 90-hour rally, covering 3,417 miles. Not yet offered to the public, Bhringers 230 SL was prepared by the Mercedes-Benz test department, featuring the typical rally modifications of the era, such as reinforced suspension and larger tanks. With 129 cars starting the rally, only 20 would endure the harsh conditions put upon them finishing behind the 230 SL.

On offer is the shown 1967 Mercedes Benz 230 SL, chassis number 113042-10-017122, engine number 127981-10-013243 that sports an older restoration and recent refreshing of the interior. This example was purchased by the current owner in 2016 and is ready to be passed onto its next custodian after much improvement and refurbishment. It has been tediously documented since 1995 to present, showing that this Pagoda has been well serviced and maintained. The documentation also depicts two owners from 1995 to 2016, making the current owner the third since then.

This particular example is finished in a deep maroon, showing evenly from panel to panel. Upon the initial approach, the paint has superb shine and looks stunning in the sunlight. The panel fitment is adequate with acceptable but perhaps not perfect clearances throughout. Under trained eyes and the right lighting, one will note some light surface scratches focused on the bonnet, front fenders, and hardtop. Something further detailing could remedy. These blemishes do not severely detract from the presentation but are noteworthy. Neither of the mentioned blemishes warrants refinishing.

The chrome in general shows to be a combination of good original and recently refinished. The bumpers and front grill present well, possessing no significant flaws. The chrome trim on the factory hardtop does display some mild pitting and moderate scratches. The black soft top is in good shape, with no noteworthy flaws. Inspecting the glass on the car, it is absent of chips, cracks, or deep scratches. The rubber seals, moldings, and trim show to be supple, free of any dry rot or damage. All four tires were replaced in 2015, showing as such, with lots of tread life remaining. The painted wheel center caps are in impeccable condition, featuring the Mercedes 3-point emblem on each. In summation, the exterior is in the category of a nice driver quality car, flaws present, but none that warrant refinishing and overall the car remains presentable, respectable, but just not perfect.

The cabin of this 230 SL is right on par with what one would hope it to be. Both of the door jams do not show any significant imperfections or damage from clumsy entry and exit, which are recently refinished. The only flaw is a scrape in the paint at the top of the jam, where a loose screw from the door latch housing came lose and came in contact with it. The interior has recently been reupholster in parchment colored leather and has also had the wood dash trim replaced. In addition, the owner has had the gauges rebuilt, functioning as such. Given that the interior was just redone, there really is not anything justifiable in terms of flaws. The only items to make mention of is a break in the rubber shifter boot, very common with the SLs of this era, and the light pitting of one of the chrome air vents.

Open up the bonnet and we have a neatly sorted engine bay that is tidy and displays many elements of correctness. The wiring is well organized, there are no visible leaks, finishes up to par, and all stampings and data tags present. Moving to the trunk, it shows as presentable with the only item to note is that of the trunk floor which was replaced, but done so correctly. There is no evidence of any poor craftsmanship, and all work appears to have been executed by very capable hands. Inspecting the undercarriage and wheel wells, they have been undercoated to prevent corrosion and appear to be fine however we cannot access the metal. The rest of the underside shows straight and true, and no sign that would suggest that this example was ever damaged. At the time the trunk pan was done, both the driver and passenger floor pans were replaced as well. Again, well done and riddled out any pesky corrosion that may have developed.

The only mechanical fault this 230 SL has, is a tendency to run a bit rich which causes an inconsistent idle at times and after time can also fowl the plugs. Under power though, the 2.3L straight-six engine pulls hard and is responsive to inputs. The operation of the gearbox presents no issues, changing gear smoothly, with the clutch performing as it should. There is no excess play in the steering and the brakes work very well, with no pulling or fade. During use, the engine maintains a steady operating temperature and produces good oil pressure. Post an adjustment of the fuel injection system to lean out the air/fuel ratio; this example needs no other immediate mechanical items that we are aware of.

The 230 SL we are left with today can be described as a well-kept driver quality example, in need of no major mechanical or cosmetic attention. Its lovely color combination is quite an eye-catcher and is an excellent piece of Mercedes heritage to induct into ones ownership. The Pagoda is an elegant, gentlemans sports car that can give the driver the illusion of a coupe with the hardtop on but remove it and one has a nimble roadster. Equipped with the desirable manual 4-speed gearbox, newly refreshed interior, and intriguing color combination, this well-rounded Pagoda would be a welcomed addition to any enthusiasts collection. Offered with the sale are the books, tools, hardtop, hardtop stand, spare wheel, and documentation file.

Note from the publisher:
Welcome to our collector car marketplace where we feature thousands of classified ad listings of vintage cars for sale. We hope that you will bookmark our site and visit often; our cars are updated every day. Furthermore we encourage you to subscribe to our mailing list so that we may periodically notify you of interesting classic cars that become available.
Home > Classic Cars For Sale > Mercedes-Benz > 230 SL > 1967 Mercedes-Benz 230 SL