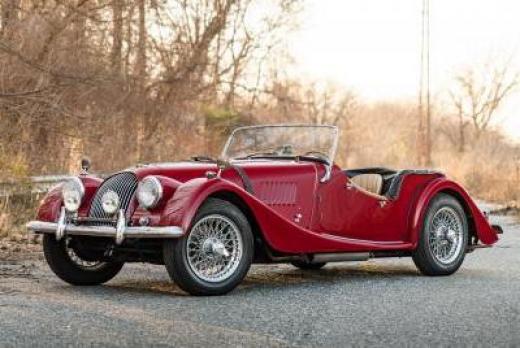 The Morgan Motor Company was founded in 1910 during the early days of motoring. In these infantile years, inventors and manufacturers alike were still battling to find the golden standard of what a car should be. Henry Fredrick Stanley Morgan, the companies founder, took some very different approaches to automobile construction that still live on to this day. For the first 26 years of the companies existence all of their offerings consisted of only 3 wheels. They also used wood heavily in the structural makeup of their cars, a process that was carried all the way through today where they still use wood for framing the body shell.

It wasnt until 1936, with the introduction of the aptly named open two-seater 4/4, that they introduced their first 4 wheeled offering which was powered by an inline 4-cylinder engine. Building off the success of the two-seater version, a four-seater offering was introduced in 1937, followed by a drop-head coupe in 1938. Production of the 4/4 was put on hold after the outbreak of WWII in 1939 and began again in 1946 shortly after hostilities in Europe drew to a close. By 1950, approximately 1,720 hand-built series 1 Morgan 4/4s had rolled off the assembly line. Throughout the late 1950s and into the early 1960s the 4/4 underwent a number of various small changes that were introduced in varying series of the relatively same car. In February 1963, the series V was introduced. This version used a 1.5L Ford Cortina engine (producing 65 bhp) which was mated to a Ford four-speed gearbox. It was during this series V run of cars that Morgan introduced the Competition model. While not specifically meant for racing, it was certainly more race friendly with the addition of top louvers to the bonnet to aid in cooling, a tachometer in the dash, and most importantly a more powerful engine thanks to a weber carburetor replacing the stock soles unit. It is believed that roughly 270 Competition models were produced during the series V run which lasted until 1968 before the 1600 series of cars was introduced. The Morgan 4/4 has proven itself throughout the years as a lightweight and nimble, true drivers type of automobile. Except for the short disruption during WWII, Morgan 4/4s have stayed in production from 1936 all the way up to today, where you can visit Morgans website and order a brand new 4/4 in any trim you desire.

The example on offer here, chassis number B 1267 and engine number K 2564 B23, is a 1967 Morgan 4/4 Competition. It was originally finished in Blue with natural leather trim but currently wears a red finish that compliments the lines of the vehicle very nicely. According to the included Morgan Chassis Record, the car was originally fitted with the following options:

Chassis 1267 left the factory on April 27, 1966, and was originally consigned to Fergus Motors in New York and sold to its first owner who is unknown. In 1970, the car was purchased by Ted Burkett of Haverford, Pennsylvania who owned the car until 1995 when the current owner and consignor purchased the vehicle. At the time of his purchase, the Morgan had 48,337 miles on the odometer. In 1996 the car was treated to a ground-up restoration performed by Madden and Ryan in Radnor, Pennsylvania. The restoration included the re-skinning of sheet metal, new wood treated with Cuprinol at the sills and door frame, a full re-paint, new interior, new front suspension, steering box, exhaust system, and replacing hoses amongst many other things. Documentation and photos from the restoration can be found below in the documents section. At various times since purchasing the car in 1995, the owner has had the starter motor, water pump, clutch and radiator replaced and the transmission was refreshed which included replacing the synchros/gears. In 2002 the engine was refreshed by David Tidd and new valves, pistons, and more stout camshaft were used and there is currently on 300 miles on the engine since. The car currently wears a set of Vredesteiner classic tires which were installed in 2010. Currently, the odometer reads 50,867 which is believed to be the correct mileage, backed up by the nicely organized chain of ownership. As it sits today, this Morgan 4/4 Competition remains in excellent condition both cosmetically and mechanically and would make the perfect car to drive and enjoy.

Note from the publisher:
Welcome to our collector car marketplace where we feature thousands of classified ad listings of vintage cars for sale. We hope that you will bookmark our site and visit often; our cars are updated every day. Furthermore we encourage you to subscribe to our mailing list so that we may periodically notify you of interesting classic cars that become available.
Home > Classic Cars For Sale > Morgan > 4-4 > 1967 Morgan 4-4