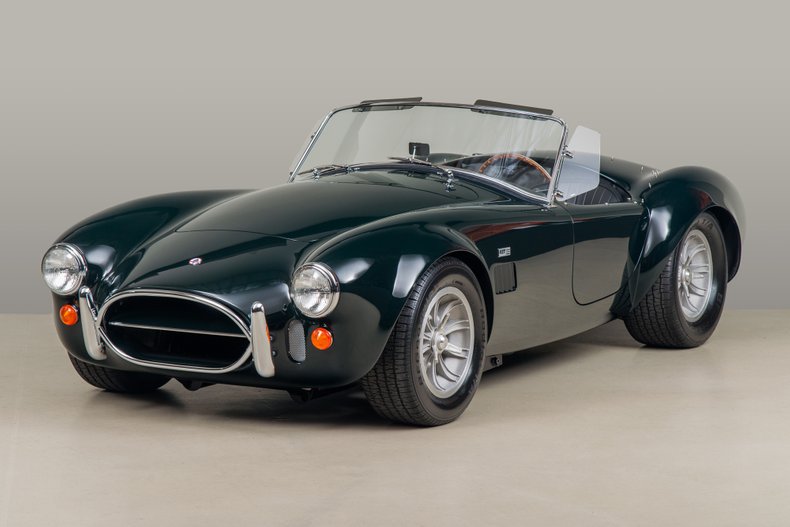 Price: Contact Seller for Price
1967 Shelby 427 Cobra VIN: CSX 3279 Full body-off concours restoration by Canepa One of 359 original Shelby 427 Cobras SAAC Registry documented Cobra Original Sunburst wheels 427-cubic inch side-oiler V8 engine rebuilt by Roush Performance 4-speed manual transmission Only 11,360 original miles Powerful, lightweight, and an American icon, the Shelby 427 Cobra was the brainchild of sports car builder Carroll Shelby. Realizing that the 289 Cobra had more potential than was currently available, he moved forward with dropping a 427-cubic inch V8 into the aluminum body and tube-frame chassis. While the aluminum body and frame had to be widened and lengthened and the chassis updated to hold the newfound power, the upgrades would yield a car that would become synonymous with lightweight performance and racecar-like handling. According to the Shelby American World Registry, CSX 3279 was billed to Shelby American on June 10th, 1966, and is noted as being originally finished in green acrylic paint with a black interior. It was then billed from Shelby to Rons Ford Sales of Bristol, Tennessee, for a total cost of $6,386.50. Geoff Howard of Danbury, Connecticut, would become the Cobras first known owner, after acquiring it in 1975 and restoring it from 1975 to 1976. It was at this time that the present 427-cubic inch, side-oiler V8 engine with medium rise heads and dual quad carburetors were installed, replacing the original 428-cubic inch power plant at the time. The car was refinished in dark green acrylic, but retaining its original interior and Sunburst wheels. Following the completion of its restoration, the Cobra was offered for sale in early 1977 by Howard. The cars next owner would be Ken Brenneman of Clarendon Hills, Illinois. CSX 3279 would see limited street usage by Brenneman, and it was well preserved in his custody. In 2000, it received a cosmetic and mechanical refreshening to the tune of $30,000, and during this time it was finished in blue with a single silver stripe and chrome side pipes, as well as adding a competition fuel filler. Shortly thereafter, it was acquired in early 2002 by Donald C. Fort of Jacksonville, Florida, and it is believed that the car was repainted in green with a single white stripe during his ownership. The Cobra would then be purchased from Fort by Sam Pack in 2008. CSX 3279 was then acquired by Canepa in November of 2014, where it would then begin a two year, body-off concours restoration. The Cobra was disassembled down to every last nut and bolt, cataloging each and every piece to ensure that they would be restored back to their period correct finishes. The hand-formed aluminum body was carefully removed from the steel chassis and placed on a special wooden support, and was then stripped of its paint, cleaned and restored. Meanwhile, the tube-frame chassis was cleaned, restored and refinished before the body was placed back together. All new aluminum interior panels were fabricated, including the dash, floors, trunk, inner fender and firewall. The 427-cubic inch V8 engine, 4-speed manual transmission and rear end were completely restored down to the smallest pieces. The engine was rebuilt by Roush Performance, ensuring that the Cobra had all of its horsepower on tap that the engine originally provided when it left the factory. All of the suspension components were crack checked, restored and refinished to new condition. All of the original hardware was carefully replated and restored back to their original factory finishes. The wheels are the original Pete Brock designed Sunburst cast aluminum wheels. The Cobra received all new upholstery material on the seats, dash, doors, and side panels. The leather seats were restored using the original seat frames. All of the Cobras instruments and switches were restored back to factory new condition. It also received a brand new, period correct soft top along with side windows to accompany it. Canep

Note from the publisher:
Welcome to our collector car marketplace where we feature thousands of classified ad listings of vintage cars for sale. We hope that you will bookmark our site and visit often; our cars are updated every day. Furthermore we encourage you to subscribe to our mailing list so that we may periodically notify you of interesting classic cars that become available.
Home > Classic Cars For Sale > Shelby > Cobra > 1967 Shelby Cobra