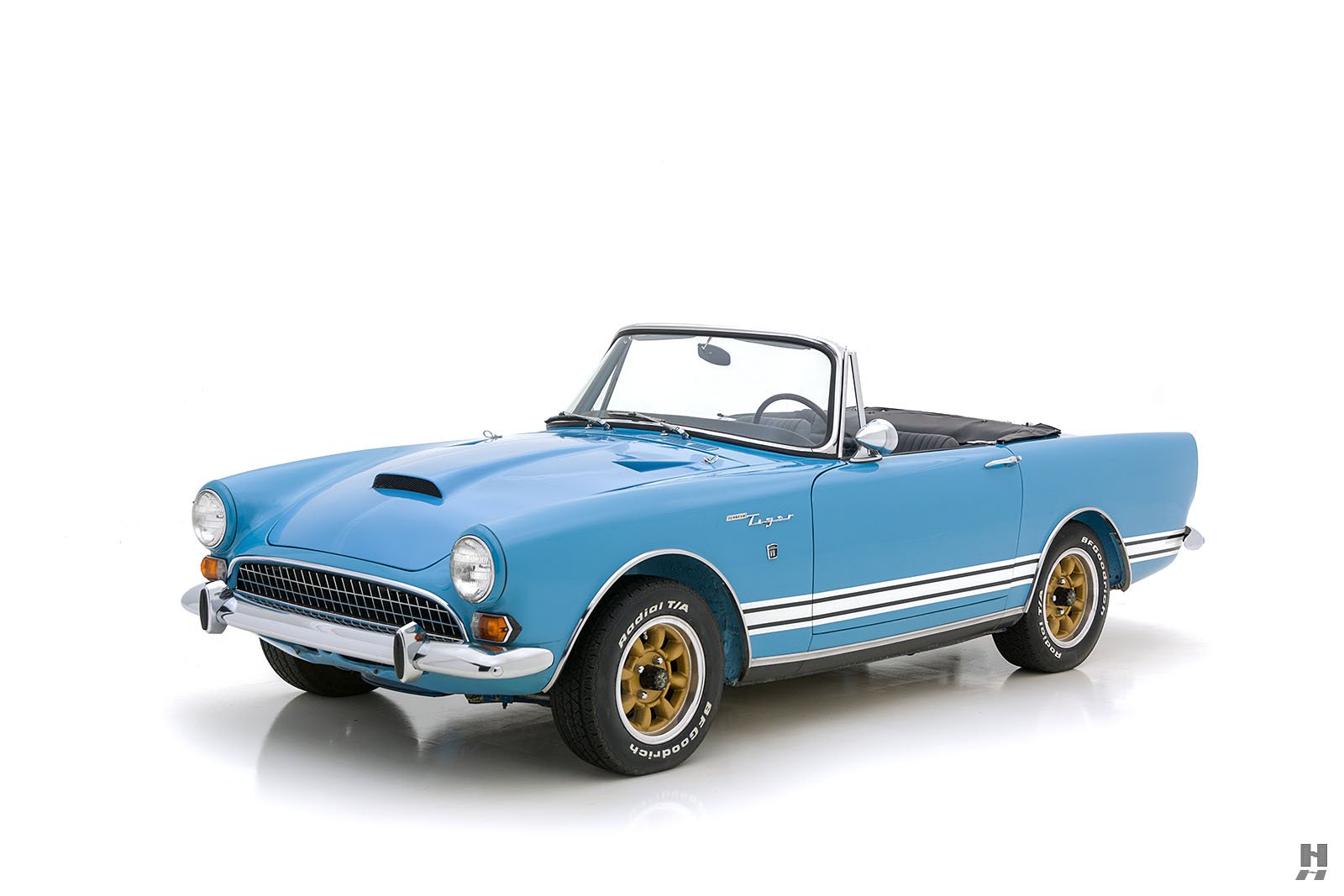 Price: USD $93,500
Buoyed by the runaway success of the Cobra Carroll Shelby set out to offer a follow-up act. ACs lovely Ace roadster provided the basis for the Cobra so Shelby again looked to England for the source of his next project. The Rootes Group had the ideal platform in their crisply styled Alpine Roadster. In the same spirit as the Cobra Shelby and his team took a base Alpine yanked out the somewhat anemic four-cylinder engine and shoehorned in Fords new 260 cubic-inch small-block V8. While the Ford engine was remarkably compact it still required some precision modifications to the engine bay with a big hammer. The suspension and brakes were suitably updated to handle the extra power and the car was given an appropriately flashy new name Tiger.The Sunbeam Tiger offered junior-Cobra performance in a more modern civilized and user-friendly package. It had a spacious and comfortable cabin roll-up glass side windows and generally felt more contemporary than the AC. After 6450 cars supplies of the 260 V8 dried up so Sunbeam and Shelby turned to the more powerful 289 cubic-inch unit. The new engine and some minor improvements carried over from the Tiger Mk IA evolved into the Tiger Mk II. Visual changes were subtle limited to an egg-crate grille and new Tiger II badging on the body. By this time however Rootes Group was under the full control of Chrysler Corporation and the idea of their flagship sportscar flouting its Ford engines was an embarrassment. As a result just 536 Mk II cars were produced less than one-tenth of the first-series production making them the most collectible and desirable of the Tiger family.This 1967 Sunbeam Tiger is an incredibly well-preserved and well-documented Mk II finished in its original shade of Mediterranean Blue (code 100) with white factory side stripes and period gold-faced Minilite wheels. According to the original invoice and window sticker on file Mr. William Wohrlath purchased this car on July 23 1967 from Peter Pan Motors of San Francisco California. Including the optional tonneau cover and dealer fees it totaled $3923.25. Early service records show Mr. Wohrlath continually improved the car during his time with it. Aside from routine maintenance receipts from Peter Pan Motors document the installation of traction bars a high-performance cam kit aluminum intake and a fiberglass L.A.T. hood - all within the first year of ownership. As offered it is in highly original unrestored condition coming to us via long term single-family ownership and retaining many of those performance parts fitted back in 1967. It is also accompanied by the STOA Certificate of Authenticity owners manual and has appeared in various publications and buyers guides as an exemplary original car.The Mediterranean Blue paint is a rarely seen color and it looks superb on the taut and compact lines. The finish displays some age-appropriate fading and few minor battle scars which only enhance its refreshingly honest character. Brightwork is straight and shows a consistent patina and the body is adorned with proper Mk II badging egg-crate grille and side stripes.Climbing aboard reveals the wonderfully preserved original interior. Upholstery is the correct heavy-grain vinyl unique to Sunbeams of the period and the car retains its banjo steering wheel burl wood dash Smiths dials and Lucas switchgear. Like the exterior the interior is in superb original condition with a lightly careworn character that invites regular enjoyment.Fords 289 cubic-inch V8 was originally rated at around 200 horsepower when new but the period upgrades undoubtedly push that number significantly higher. Lifting the fiberglass L.A.T. hood reveals an orderly engine bay appropriately detailed for an unrestored car. Many of the period aftermarket parts remain including the aluminum intake manifold and chrome air cleaner along with finned Cobra motif valve covers believed to be a later addition. The taller intake fitted in 1967 necessitated the replacement hood which provides clearance for the carb and features additional scoops and vents to keep the engine fed and cool.This marvelous Sunbeam Tiger has been in the care of one family since the late 1990s who have taken great care to preserve its incredible originality. The Sunbeam Tiger Owners Association CoA issued in 1994 is more than just a production record as it required an in-person inspection from a trained specialist to ensure this is a genuine Tiger Mk II. With its marvelous patina and fascinating well-documented history this rare and desirable Sunbeam will be a welcome addition to any enthusiasts stable.Offers welcome and trades consideredFor additional details please view this listing directly on our website https://hymanltd.com/vehicles/6835-1967-sunbeam-tiger-mkii-roadster/

Note from the publisher:
Welcome to our collector car marketplace where we feature thousands of classified ad listings of vintage cars for sale. We hope that you will bookmark our site and visit often; our cars are updated every day. Furthermore we encourage you to subscribe to our mailing list so that we may periodically notify you of interesting classic cars that become available.
Home > Classic Cars For Sale > Sunbeam > Tiger MKII > 1967 Sunbeam Tiger MKII