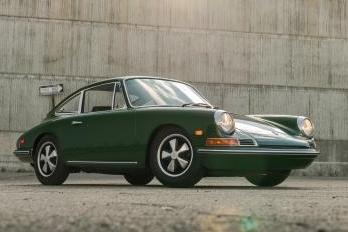 With the 911s introduction in 1963, the cries of That's not a real Porsche! were immediate and resounding but as the reviews came in and more people got behind the wheel, it became clear that Porsche had hit a home run. Combining an excellent level of comfort with a fantastic driving nature, the 911 would go on to be Porsche's poster child and the bar for which all other sports cars of the past and future would be measured against.

This particular 1968 Porsche 911, chassis number 11830146 fitted with engine number 3280309, is a numbers-matching example according to the included Porsche COA. It is finished in factory colors of Irish Green (6806) over Black Leatherette. Production completion date is listed as 10/20/1967 and it was well equipped from the factory including Wood Steering Wheel, Koni Shock Absorbers, Loudspeaker, Talbot style exterior mirror on the left, ventilated chrome wheels, and Pirelli Tires (165/15). Not much is known on the early history of the car but the current owner purchased the 911 out of the Pacific Northwest area approximately 5 years ago. During their custodianship, the current owner completed photo documented work to the engine, body, and components of the vehicle. A new coating of Irish Green Paint was skillfully laid down on the exterior of the car while keeping the interior in its nice original condition. All parts used in refreshing this car were either original or NOS. A complete top end rebuild was completed but the case was not split so it does leak a bit. The suspension and brake systems were gone through and all new parts were used in refreshing these two systems. Koni shocks were placed on all four corners and GTV6 Brembo front calipers were added. An alignment was completed and the pedal box was gone over as well. The car is currently completely rust free and the front pan and battery box were professionally replaced in the proper manner which includes drilling out the old spot welds and spot welding the new body pieces in place. The car currently wears properly date coded 5.5-inch fuch wheels instead of the steel ventilated chrome wheels indicated on the COA although the spare is of the correct type. Overall this car has been thoroughly gone through and anything that needed refreshing was taken care of. Currently, the car needs nothing and is ready to be thoroughly enjoyed.

Included with the sale of this car is the COA, books, tools, and the spare. Please visit www.LBILimited.com for many more photos and details. Worldwide shipping is available upon request. Follow us on Instagram and Facebook @LBILimited #ClaimYourClassic.

Note from the publisher:
Welcome to our collector car marketplace where we feature thousands of classified ad listings of vintage cars for sale. We hope that you will bookmark our site and visit often; our cars are updated every day. Furthermore we encourage you to subscribe to our mailing list so that we may periodically notify you of interesting classic cars that become available.
Home > Classic Cars For Sale > Porsche > 911 > 1968 Porsche 911