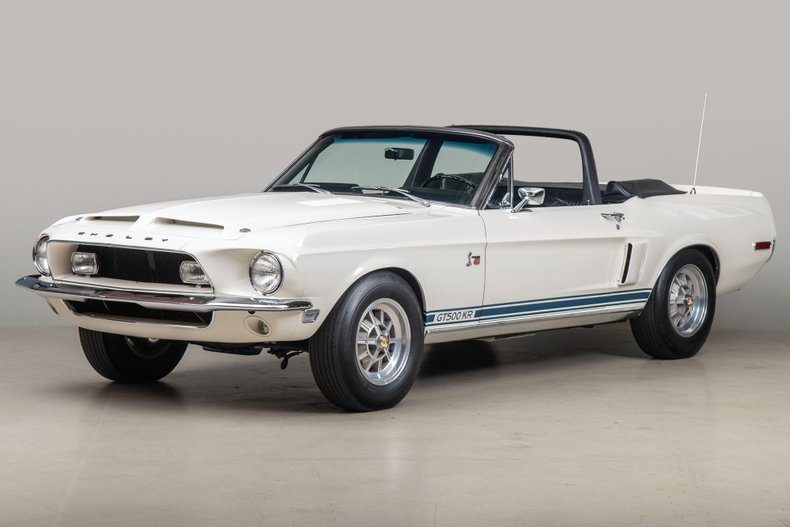 Price: Contact Seller for Price
Click here to view high resolution photos One of approximately 257 4-speed manual cars, 517 total convertible examples made in 1968 Documented in the Shelby American World Registry Fully restored in original specification with a white exterior over black interior King of the Road-specific 428 cubic inch (7.0-liter) V8 Cobra Jet engine Power steering and brakes, tilt wheel, shoulder harnesses, 3.50 Detroit Locker Differential Quickly becoming a household name in racing with the success of the Ford GT40 program and Shelby Cobras, Shelby American was the company that all hot rod and performance drivers wanted to be associated with. With a successful run of Cobras, GT350s and GT500s, Carroll Shelby saw his business grow exponentially to where his famous Los Angeles airport hangers were bursting at the seams from business. With 1968 looking like another growing year, it was time to move. 1968 not only saw the growing of Shelby American, but also the birth of Shelbys most powerful Mustang-based car yet: the Shelby GT500KR, or King of the Road. For 1968 Shelby not only wanted to introduce a car that would threaten other car manufacturers and their sports car models, but also appeal to more people in America. This was the first year that all Shelby cars were built in New Jersey. Ford was working on a new engine called the Cobra Jet, which was developed in order to go up against Chevrolet Chevelles in drag racing. While Ford rated the engine at a modest 335hp to try and fool the NHRA officials, it actually produced closer to 400hp. With over 450lb-ft of torque, it was perfect for the range-topping Shelby GT500KR. Convertibles were introduced to the GT500 line in 1968, coinciding with the King of the Road perfectly. King of the Road convertibles were only a small part of total Shelby production in 1968. While there was a total of 4,451 Shelby examples built, only 517 were GT500KR convertibles. Even rarer was the factory 4-speed manual transmission inside of these roofless models. With an integrated roll hoop, a special interior, mountain-moving power and torque, and a host of mechanical upgrades that included power brakes, beefier suspension, quad-tip exhaust, the GT500KR was and felt like a range-topping model. With its long sloping hood hiding the 428 cubic inch V8 underneath hand-laid fiberglass, it became a contender and dominator at any stoplight or backroad. This 1968 Shelby GT500KR was shipped to Frontier Motor Sales in Niagara Falls, New York, with its invoice dated July 23rd, 1968 per the Shelby American World Registry. Reportedly it was purchased by a mother whose son convinced her that she desperately needed a Shelby Cobra 427 as her new car. On the day she was set to test the Cobra it was raining, and she decided that it was too impractical. However, this GT500KR was also available. It was equipped with power steering, tilt steering wheel, power brakes, shoulder harnesses, and a 3.50 Detroit Locker rear differential. It was also optioned in white over a black interior, factory 4-speed manual transmission, and more importantly had a top, she took it for a test drive and subsequently purchased the car. Over the course of its travels, the GT500KR was completely restored to a fantastic level, with a restoration that to this day has stood up to the test of time. The most recent owner purchased the car around 2013, keeping it as a part of his collection of cars and driving it sparingly. Upon arrival at Canepa, Bruce Canepa took the car for a test drive to feel out how it performed. Having driven a number of Shelby GT500KRs in his lifetime paired with his exceptional attention to detail, he knew how one should drive. Upon returning, he determined that it was one of the best driving GT500KRs that he had ever experienced. During our intensive inspection, it was obvious that this car was e

Note from the publisher:
Welcome to our collector car marketplace where we feature thousands of classified ad listings of vintage cars for sale. We hope that you will bookmark our site and visit often; our cars are updated every day. Furthermore we encourage you to subscribe to our mailing list so that we may periodically notify you of interesting classic cars that become available.
Home > Classic Cars For Sale > Shelby > GT500KR > 1968 Shelby GT500KR